Actor Aamir Khan on Monday dismissed viral Whatsapp messages and Facebook posts that credited him for donating cash in wheat flour packets to nearby slums during the ongoing lockdown . In a tweet Khan said that it was not him who sent 'money in bags of wheat' and termed the narrative associated with him as 'completely fake'.

Guys, I am not the person putting money in wheat bags. Its either a fake story completely, or Robin Hood doesn't want to reveal himself!
Stay safe.
Love.
a.

These viral messages had spun a tale around the actor and his unique way of donating money to the poor in Mumbai slums during the lockdown period. Forwards, which were viral in both Hindi and Bengali, claimed that the actor slipped in cash of Rs 15,000 in packets of one kilogram of flour and anonymously distributed them among the slum dwellers near his house.

BOOM had earlier reached out to a member of Khan's team, who also denied any such relief activity taken up by the actor or his team.

The messages lauded Aamir Khan for his special gesture to reach out to the poor and needy during the trying times. A nationwide lockdown to contain the spread of COVID-19 was announced by the Indian government on March 24, leaving thousands of daily wage earners unemployed. The lockdown was further extended till May 17 to flatten the curve of the disease spread, thus increasing uncertainties among workers. Scores of celebrities from the Hindi film industry have come forward to contribute during the crises period.

An excerpt from one such viral message in Bengali reads, "Aamir Khan has sent a vehicle full of atta packets at a nearby slum. His boys reached the spot and announced that whoever needed atta could come and collect it from them. However, the atta distribution quantity was limited to just one kilo. People who had enough ration at their homes did not go to collect the atta. However, whoever received the packets found to their dismay cash of Rs 15,000. Later it was found out that the truck was sent by Aamir Khan."

Several posts in Hindi had also shared an image of cash in packets of flour along with the narrative.

Below is a screenshot of the viral Bengali message. 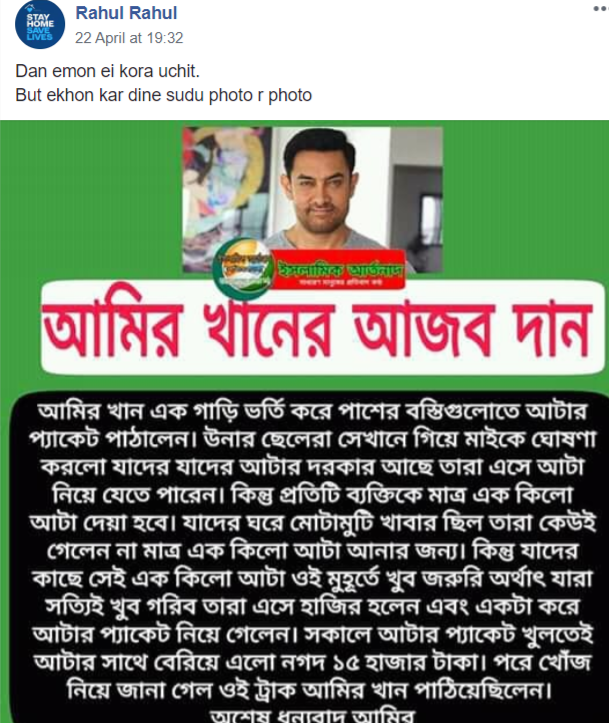 The same image of wheat bags and cash is viral on Twitter with claims that the actor took the unique initiative.

The viral narrative of Aamir Khan donating money in flour packets was also viral in Malayalam, along with an audio.

Khan had donated to the PM Cares Fund

We reached out to a member from Aamir Khan's team who said that while Khan has taken up several undisclosed relief drives, this particular gesture of donating cash was not his. According to reports Aamir Khan has also donated an undisclosed amount to the PM Cares fund of India.

In a tweet, film analyst Taran Adarsh shared about Khan's donation to the Maharashtra Chief Minister Relief Fund and how the actor has extended support to the daily wage workers of his forthcoming film Laal Singh Chaddha.

BOOM however could not independently verify the image of cash in flour packets that were doing the rounds.

The origin of the bags of wheat and cash message

BOOM came across a TikTok video by user Crazy Traveller (Khansaheb028) who shared the same incident of the unique donation drive by an anonymous philanthropist and did not credit actor Aamir Khan for the same.

Interestingly, the same video was later viral with the caption, "Aamir Khan donates."

A screenshot of what appears to be a news article is viral with claims that the incident of donating cash hidden in atta packets of a kilo each, is from Surat, Gujarat. An excerpt from the article states how a Surat based industrialist donated the cash to migrant workers stuck in Surat.

BOOM has had reached out to RB Brahmabhatt Commissioner of Police, Surat, who termed the news as 'baseless.' 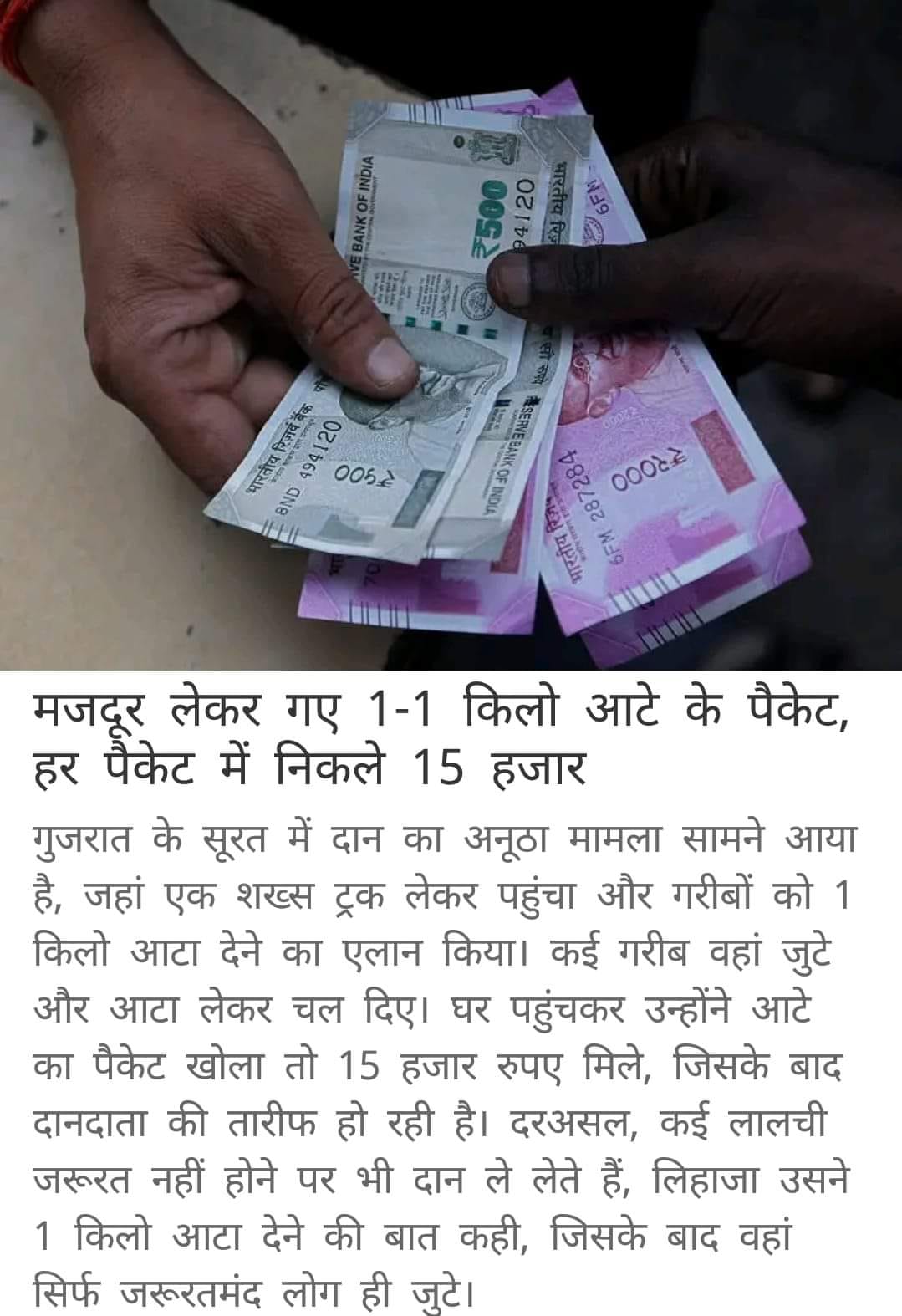 Hoax About Naseeruddin Shah Surface In A Dark Week For Cinema

Claim :   Aamir Khan donates money to the poor in atta packets of one kilo each
Claimed By :  Facebook and Whatsapp
Fact Check :  False
Aamir Khan atta packets Rs 15000 cash donations Aamir Khan fake news Bollywood FAKE NEWS money in atta aamir khan 15000 donation
If you value our work, we have an ask: Our journalists work with TruthSeekers like you to publish fact-checks, explainers, ground reports and media literacy content. Much of this work involves using investigative methods and forensic tools. Our work is resource-intensive, and we rely on our readers to fund our work. Support us so we can continue our work of decluttering the information landscape. BECOME A MEMBER
📧 Subscribe to our newsletter here. 📣You can also follow us on Twitter, Facebook, Instagram, Youtube, Linkedin and Google News 📝Stay updated with all our latest fact check stories.