A wedding invitation card where the groom is a Muslim and the bride a Hindu is being shared with an unrelated photo of woman who was murdered in West Bengal by her family to make a false claim that it shows the consequence of Hindu women marrying Muslim men.

The posts show two photos - one a wedding card of a Sameer Khan with Prerna Vyas with her changed name mentioned in brackets as Ayesha Khan and the second photo shows a woman's dead body. The viral posts are linking both the photos and claiming it is a case of "Love Jihad" since the girl was a Hindu and with captions that reads, "Love Jihad's last stop, "Death" 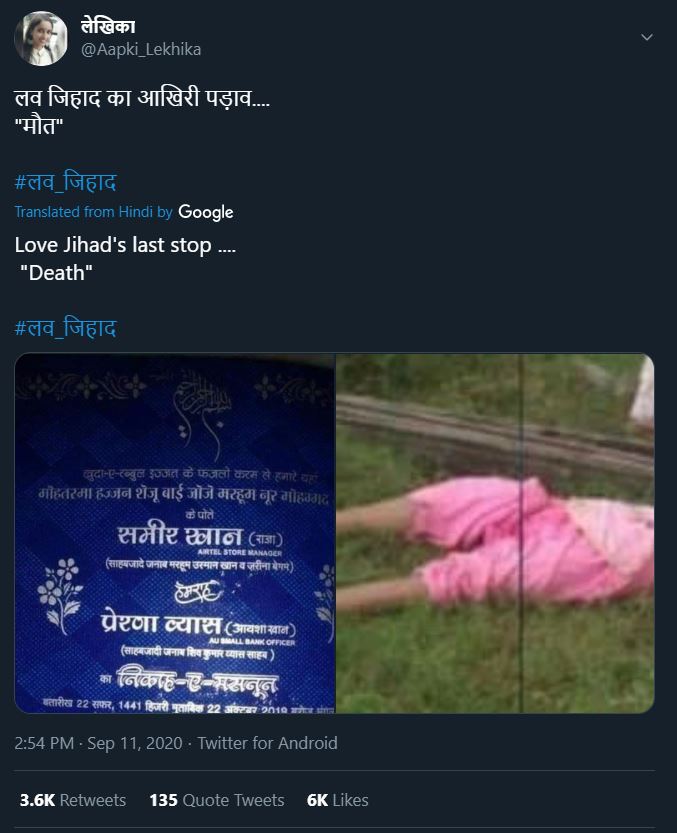 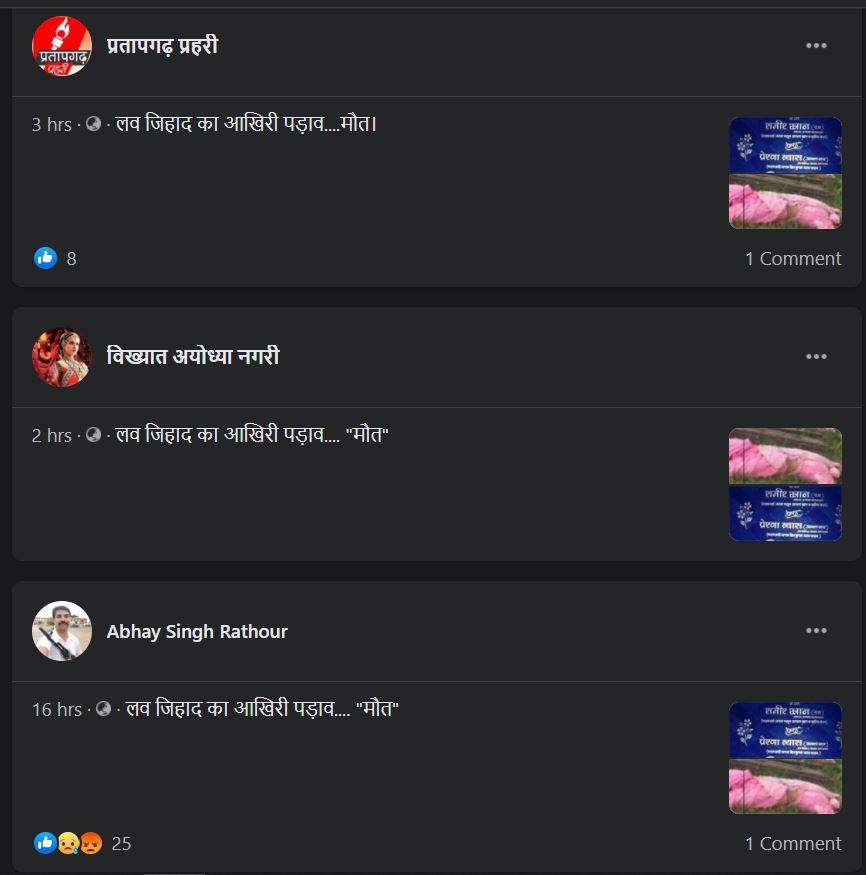 BOOM found that both the photos are unrelated and the dead body in the photo belongs to a woman from West Bengal who was murdered by her family in 2018 a case of 'honour killing'. The wedding card is from October 2019 and the name of the woman in the card is not the same as the one who was murdered.

The search results for the photo of the deceased woman show reports for a August 2018 case where a Muslim woman identified as Jahana Khatoon was found dead in an open field. The news reports said that West Bengal police had arrested the father and brother of the woman who had allegedly murdered for being in a relationship with a Hindu man.

A dead body of a young girl wearing a pink salwar kurta and her face had been mutilated with a heavy stone was recovered from a bush off Nabagram Durgapur Expressway near Burdwan district in West Bengal on August 31, 2018, reported DNA on September 12, 2018. The news report included the same viral photo of the dead woman's corpse. 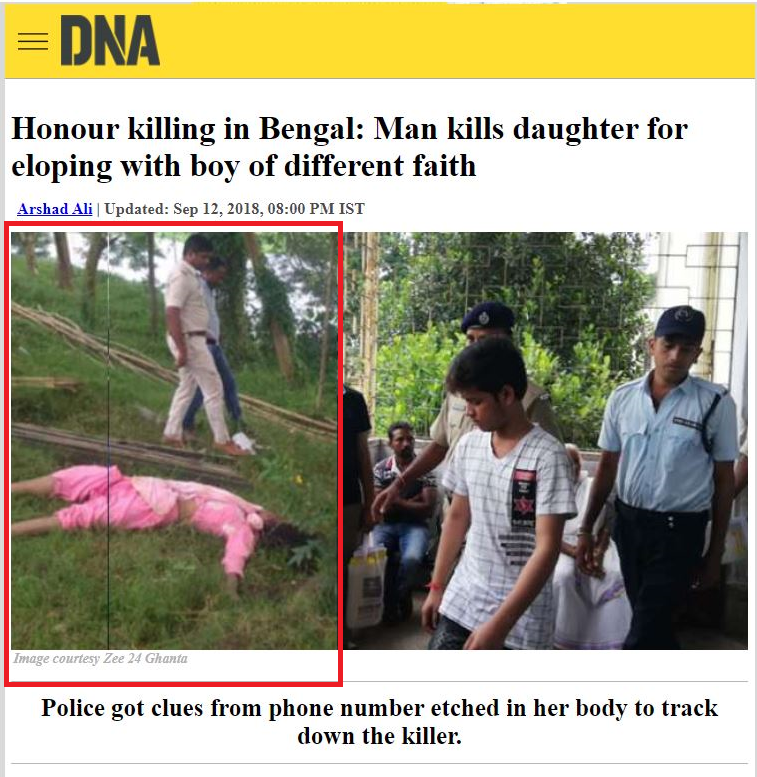 The report further states that the Muslim woman was identified as Jahana Khatoon was allegedly killed by her father Md Mushtaque and brother Md Jahid for being in a relationship with a Hindu man named Karan Singh.

A PTI report also quoted a police officer as saying that the father and brother admitted to killing the woman with a rope inside a moving vehicle, while they were taking her back to Jamalpur, Bihar and then dumped her body in the agricultural land after defacing her face with a stone near Burdwan district.

We also found a video news report by ABP Ananda dated September 11, 2018, on the incident where at the 0.43 minutes timestamp one can see the same dead body in pink attire with police inspectors standing near it as seen the viral photo. 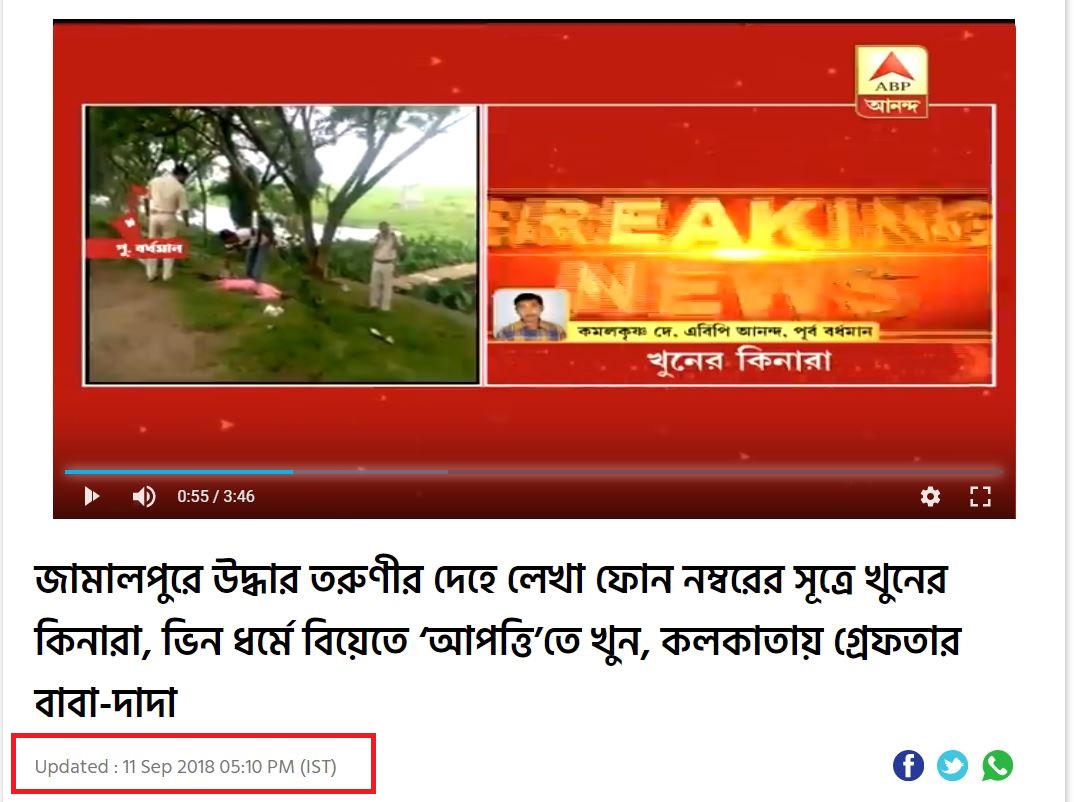 The name of the woman killed - Jahana Khatoon and the Hindu man - Karan Singh she was in a relationship with do not match with the names mentioned in the wedding card - Sameer Khan and Prerna Vyas (Ayesha Khan).

Additionally, the month and year mentioned in the wedding card are from October 2019, whereas the incident of the woman murdered in the second photo is from August 2018, atleast a year before the card. This shows that the two photos are unrelated.

A reverse image search on the wedding card showed that it has been circulating online since October 2019, atleast a year after the August 2018 murder case.

BOOM could not independently verify the wedding card, however, we could establish that it is unrelated to the second photo being shared which is from an August 2018 murder case.

BOOM has previously debunked fake news surrounding 'Love Jihad', when images of an inter-faith couple were shared along with a photo of a dead body surrounded by police personnel falsely claiming that she was murdered by her Muslim husband after their wedding.

বাংলা পড়ুন
Claim :   Photo shows the murder of a Hindu woman after getting married due to Love Jihad
Claimed By :  Facebook Posts
Fact Check :  False
Fake News FactCheck Love Jihad Hindu Muslim Communal Spin West Bengal Hindu girl Muslim boy inter faith marriage Burdwan district Bengal police honour killing
If you value our work, we have an ask: Our journalists work with TruthSeekers like you to publish fact-checks, explainers, ground reports and media literacy content. Much of this work involves using investigative methods and forensic tools. Our work is resource-intensive, and we rely on our readers to fund our work. Support us so we can continue our work of decluttering the information landscape. BECOME A MEMBER
📧 Subscribe to our newsletter here. 📣You can also follow us on Twitter, Facebook, Instagram, Youtube, Linkedin and Google News 📝Stay updated with all our latest fact check stories.