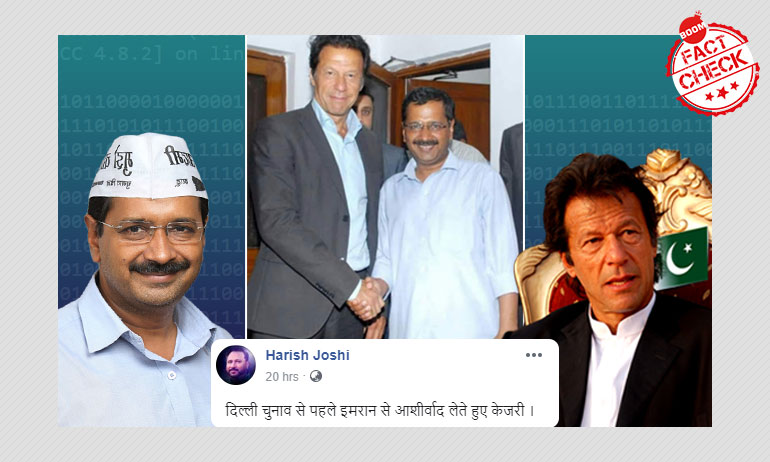 Photos of Pakistan's Prime Minister Imran Khan visiting Arvind Kejriwal at his Delhi residence in 2016 have resurfaced with claims that the two met ahead of the Assembly elections in Delhi, that will be held on February 8.

The posts have been doing the rounds with the narrative that Kejriwal's Aam Aadmi Party (AAP) is backed by Pakistan and that Khan exchanged greetings with him before Delhi went to polls. The caption when translated in English, "Kejri taking blessings from Imran Khan ahead of Delhi elections." (Original text in Hindi: "दिल्ली चुनाव से पहले इमरान से आशीर्वाद लेते हुए केजरी।")

Another post speculates the reason why Kejriwal had to team up with Khan to win the election. It has been captioned as, "Why did Kejriwal have to shake hands with Pakistan to win Delhi's election?" (Original Text in Hindi: ''केजरीवाल को दिल्ली चुनाव जीतने के लिये पाकिस्तान से क्यो हाथ मिलाना पड़ा ?'') The post is archived here.

Also Read: Did AAP Distribute 'Magic' Blankets To The Differently-Abled? A Fact-Check

Upon relevant keyword searches, BOOM found that Imran Khan had met Kejriwal in May, 2016, during his visit to Delhi. The two met at Kejriwal's residence in Flagstaff Road in the capital and had tweeted about the same.

Met Imran Khan and we shared our experiences in politics. Both challenging status quo in respective countries pic.twitter.com/XsFuT8AYjD

An extended clip of their meeting can be seen below, which was uploaded by the Delhi Government's YouTube channel. Khan however has not met Kejriwal in the recent times.

In fact Kejriwal recently took on Pakistan's federal minister of science and technology, Ch Fawad Hussain who called on people to defeat the BJP in the Delhi elections. Kejriwal said that a Pakistan minister should not "meddle with India's internal matters."

The photos had resurfaced in 2018, when The Quint debunked them. Read the fact-check here.

A screenshot of a tweet by an unverified handle of Hamid Gul, former Inter-Services Intelligence (ISI) DG of Pakistan Army has been used in Facebook posts to claim that Pakistan has urged Indian netizens to vote for AAP.

BOOM found that the tweet was shared by the handle @GenHameedGul in May, 2015. Gul died in August, 2015. The account appears to be fake as tweets were shared even in December that year.

[email protected] rofl are u tweeting from your grave https://t.co/bSwfIGzl9a