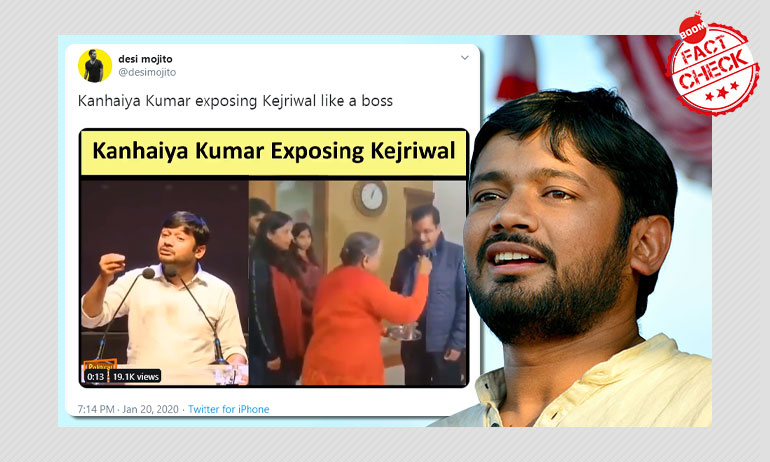 In the 28 second long clip, Kumar can be seen addressing a crowd. He makes frequent references to a politician and his ways of 'using his family to connect with the masses.' As Kumar speaks, footage of Kejriwal seeking blessings from his mother, plays on the right, to claim that the former has been referring to Kejriwal. The video has a text on top, which reads, "Kanhaiya Kumar exposing Kejriwal."

BOOM found that the video was recorded on October 2, 2018 at an event in Hyderabad where Kumar was referring to Narendra Modi and taking a dig at him for being photographed with his mother frequently.

Kumar can be heard saying in the video, "When the work is not done, to divert it, he goes to his mother and wife. Tell me, what kid of son does this... gets photographed while touching his mother's feet. He goes to meet his mother with a team of photographers. What kind of son does this? Please understand, I am against such a conspiracy, when an individual sells his own reality of life and deviates from questions. We should under such a conspiracy..."

BOOM ran a keyword search and found the original speech that was recorded on 2018 at an event organised by Hyderabad based Manthan foundation. Kumar was addressing a packed audience at the Manthan Samvaad, an annual event where renowned personalities deliver a talk.

In the video Kumar can be heard referring to Narendra Modi from 49:54 minutes onward when a member from the audience poses a question to Kumar on comments made on someone's (read: the prime minister's) personal life. She refers to Gautam Budhha and his renunciation of worldly ties and then questions Kumar on what could someone gain by commenting on someone who has reportedly abandoned his wife.

Kumar then refers to Modi and brings instances where the latter had showcased his larger than life image. He says, "Everybody has their own life struggles. But when you do its marketing... You can be a loser but you will not make your 90 year old mother stand in the queue during demonetisation. But when someone does this, it does not remain personal, it becomes a public matter. And if this is public, then it will be criticised as well. I respect the mother, but we should question the 'loser' son for such an action."

Kumar then goes on to criticise Narendra Modi and accuses him of going to his family to divert attention from pending work. "What ever work he does not do, to divert the same, he goes to his mother and wife. Who can be such a son, who will want to be photographed while seeking blessings from his mother? Who will go to meet his mother with a team of camera persons."

Meanwhile, the video of Kejriwal seeking his mother's blessings before filing his nomination was shot on January 20. The same has been uploaded on Aam Aadmi Party In News' (@AAPInNews) official Twitter handle.