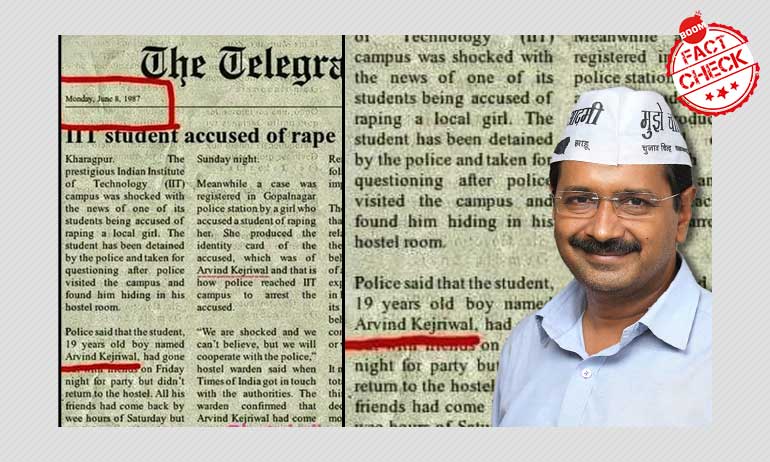 A newspaper clipping claiming to show that Delhi Chief Minister Arvind Kejriwal was accused in a rape case during his student life at the Indian Institute of Technology (IIT), Kharagpur, is fake and has been created with the help of a website.

The clipping shows a cut out of a newspaper article which appears to be The Telegraph. The report is headlined as, 'IIT student accused of rape.' The article, which has a dateline of Monday, June 8, 1987, states that a 'local girl had accused a nineteen year old boy of raping her.'

It further identifies the accused as Arvind Kejriwal and also states that Kejriwal had been detained by the local police after the girl lodged a complaint. The dateline of the news report is Kharagpur.

Aam Aadmi Party (AAP) leader Arvind Kejriwal graduated from the IIT Kharagpur with a B Tech degree in the 1980s.

An excerpt from the article reads, "The prestigious Indian Institute of Technology (IIT) campus was shocked with the news of one of its students being accused of raping a local girl. The student has been detained by the police and taken for questioning after police visited the campus and found him hiding in his hostel room. Police said that the student, 19 years old boy named Arvind Kejriwal had fone out with friends on Friday night for party but didn't return to the hostel."

The fake newspaper clip has resurfaced in the run up to the Delhi Assembly Elections that will be held on February 8.

Upon relevant keyword searches on Facebook, we found that the clip was viral in 2016 as well. The same was debunked by the Quint earlier in 2018.

BOOM received the clip on its helpline number for verification as well.

BOOM was able to ascertain that the newspaper was not credible as there were discrepancies in the style sheet of the article. Upon relevant keyword searches, we came across an online newspaper clip generator that was used to generate this article. Newspaper clips with desired mast heads, headline and dates can be generated through the website.

We also looked up Kejriwal's affidavit, submitted to the Election Commission of India. According to the document, Kejriwal has stated that he has not been convicted for any criminal offence. BOOM reached out to Delhi Police, who declined to comment.