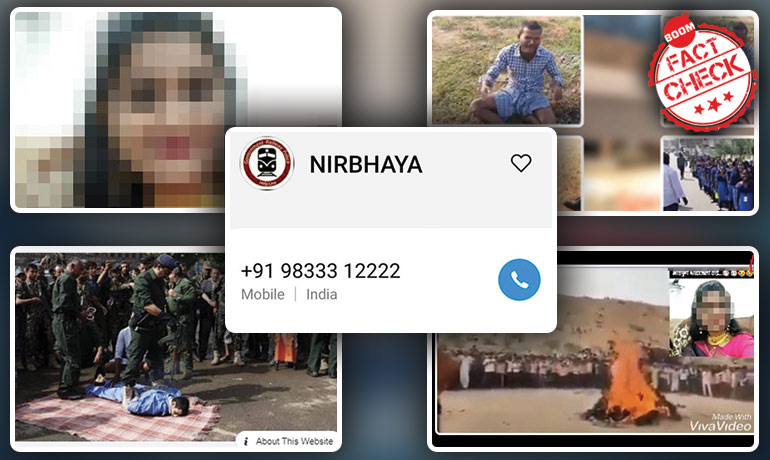 After news of rape and murder of a Hyderabad-based veterinarian sparked outrage across the country, social media has been abuzz with misinformation surrounding the incident.

The 26-year-old veterinary doctor was gang raped, murdered and then set on fire by four men on the outskirts of Hyderabad on November 28. The victim's charred body was found the next morning, following which the Cyberabad police arrested four accused - Mohammed alias Areef, Jollu Shiva, Jollu Naveen, and Chintakunta Chennakeshavulu.

As gory details of the case came to light, misinformation also started trickling in. BOOM has compiled a list of multiple pieces of misinformation that has been doing the rounds post the incident.

A now defunct helpline number is being shared on social media with posts urging women to reach out to the number in times of distress. Termed as the Nirbhaya number, after the Delhi gang-rape victim, the viral message claims that a blank message or a missed call on this number (9833312222), can directly connect women to the police during emergency. An excerpt from the message reads, "Ladies can send blank msg or can give missed call.. so that police will find your location and help you."

BOOM found that the number was launched in 2015 by the Mumbai Railway Police. However, it was deactivated and the services were discontinued in 2018. Furthermore, the number was not a pan-India helpline number but an exclusive WhatsApp messaging helpline number for women commuters using the suburban railway services in the city.

A video of an alleged rape accused being beaten up by cops in Chittoor district of Andhra Pradesh was viral as footage of police coming down heavily on rape accused Mohammed alias Areef in the gang rape and murder of the veterinarian in Hyderabad. BOOM found that the video is originally of a man who was accused of raping a minor girl in Chittoor, in the last week of November. The same video was uploaded to YouTube by a local Telugu news portal on November 26, two days before the incident happened in Hyderabad.

A day after news broke about the brutal gang rape and murder of the Hyderabad resident, multiple handles on Twitter started giving a communal overtone to the incident by identifying the perpetrators as Muslims. BOOM spoke to Cyberabad police, investigating the case, who denied any communal angle to the incident and warned against sharing fake and communally sensitive posts.

Even before the arrests were confirmed by the police, several handles, many of these right leaning, claimed that the incident happened in an area largely populated by Muslims.

"There are three Hindus and one Muslim in the list of the accused. So tell me, how is it a communal incident?" a senior police officer, who was part of the investigating team, told BOOM.

IPC 233 gives a woman the right to kill the rapist?

A fake message which claims that under Section 233 of the Indian Penal Code a woman won't be punished if she killed the man who raped her, resurfaced.

This message was previously viral on WhatsApp in the aftermath of the Kathua and Unnao rape cases.

BOOM found that IPC 233 is neither an anti-rape law nor distantly related to rape. It covers the non-bailable crime of 'making or selling instrument for counterfeiting coin' and offers a punishment of imprisonment for 3 years and fine.

Read More: Did Modi Govt Pass A Law Which Gives A Woman The Right To Kill The Rapist?

An unrelated video of a funeral with a burning pyre is viral on social media with claims that it shows the cremation in progress of the Hyderabad rape victim.

A search with relevant keywords led us to the cremation video of the victim that was uploaded to YouTube by ETV Andhra Pradesh. The premises in the video do not match the one that is viral on social media. Furthermore, BOOM contacted Purana Pul cremation grounds management, where the cremation was held, and it was confirmed confirmed that the viral video is not of the victim's last rites.

Read More: No This Is Not Last Rites Of Hyderabad Rape Victim

A disturbing video of a man being publicly executed for raping a minor in Yemen is viral on social media with claims that the incident happened in Dubai, where the judiciary punished the rapist with death moments after committing the crime.

The search results showed that the same video was uploaded to YouTube with a caption in Portuguese. The incident happened in Yemen where the accused, identified as Muhammad Al Maghrabi, was executed in Yemeni capital of Sana'a in 2017.

No Telangana police has not introduced a new mobile tracking number

Hyderabad Police took to Twitter to rubbish a fake message that is doing the rounds about a helpline number introduced by the former to track mobile phones. The fake message states that the Telangana police has introduced a new mobile tracking number (9969777888), and on sending a message, the police can track the vehicle the person is travelling. The Hyderabad Police urged netizens not to share the fake message.

#FakeNews Circulating on #SocialMedia Regarding #Telangana Police Introduced a New Mobile Tracking Number (9969777888) While Travelling in Cabs & Autos it is is Fake News Don't Circulate it. pic.twitter.com/tPkqzuR1eX

Screen grabs of a beheading incident from Karnataka, involving two men who fought over a personal issue, have been revived in the wake of the Hyderabad rape incident.

Multiple viral posts have resurfaced with claims that the man beheaded the rapist who sexually assaulted his sister in Chennai, Tamil Nadu. Netizens have misleadingly lauded the man based on the false claims.

The shocking surrender captured on video happened on September 29, 2018 in Karnataka's Mandya district where a quarrel between two men turned violent after one of them allegedly said something disrespectful about the other's mother.