A WhatsApp message warning people not to open a video file called ''Argentina is Doing it'' as it will hack their phone in 10 seconds is a hoax. In order to lend credibility to the message, the WhatsApp forward falsely claims CNN also reported about the video.

The viral message reads, "They are going to start circulating a video on WhatsApp that shows how the Covid19 curve is flattening in Argentina. The file is called "Argentina is doing it", do not open it or see it, it hacks your phone in 10 seconds and it cannot be stopped in any way. Pass the information on to your family and friends. Now they also said it on CNN."

Another variant of the message that is going around reads, "There is a video circulating WhatsApp that shows how the Covid19 curve is flattening in Argentina. The file is called "Argentina is doing it", do NOT open it or see it, it hacks your phone in 10 seconds and it cannot be stopped in any way."

BOOM received the viral forward on its WhatsApp helpline number (7700906111) inquiring about it.

A simple search for 'argentina is doing it' 'whatsapp video' on Google does not show any report published by CNN. 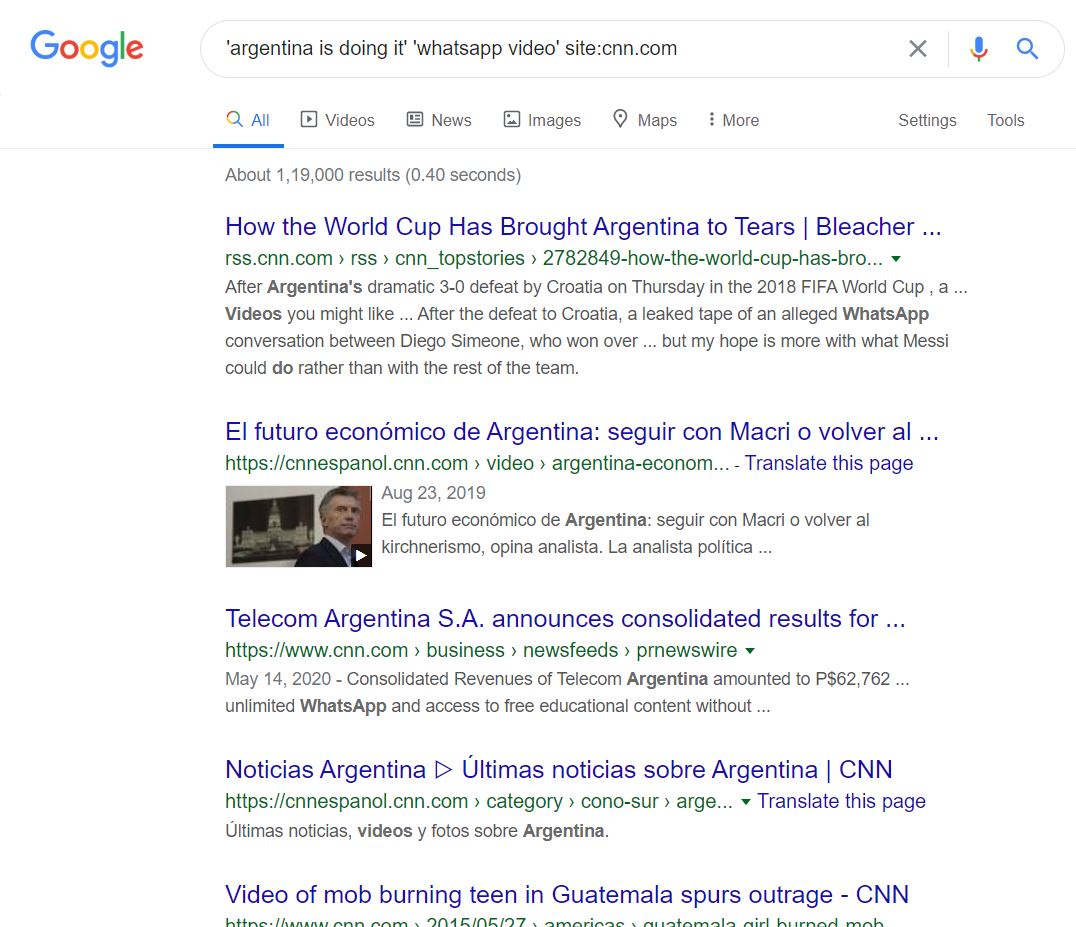 BOOM reached out to CNN for a response, the article would be updated upon receiving a response.

The Telltale signs of a hoax

The viral forward follows the same pattern of WhatsApp hoaxes, like the WhatsApp message 'Sonia disowns Rahul' which was viral in April 2017 falsely claiming that on accepting the video a virus would format the phone of the user.

Secondly, the viral forward falsely attributes it's the source to CNN, which if it was indeed would have received wide media coverage.

Thirdly, it asks people to forward it to their friends and family which is a big red flag as most of these WhatsApp forwards follow the same pattern. The message would not have to depend on WhatsApp users to forward it if such a video would have been doing the rounds.

Possible, but this bug has been fixed: Security Expert

We found a Times of India report dated November 18, 2019, which stated that the Indian Computer Emergency Response Team (CERT-In) had advised citizens to update to the latest WhatsApp version then after Facebook had reported critical security warning for WhatsApp users then.

The report stated that it was because a new vulnerability had been discovered which might allow hackers to target someone by simply sending a malicious video file via WhatsApp.

BOOM reached out to Rahul Sasi, an Indian entrepreneur, security expert, and white-hat hacker who said that this was possible, however, stated that the bug had been fixed by WhatsApp. "Technically speaking its a fixed bug, that means WhatsApp is not vulnerable to this anymore," Sasi said.

On the preventive steps that WhatsApp users could take Sasi told BOOM that, "There is no specific way we could detect an exploit attempt of this sort, but one should always keep the recent updates on the phone."

Other instances of WhatsApp spyware hack include in May 2019, when Financial Times had reported a vulnerability in the older version of the app that allowed attackers to inject spywares on phones through a simple in-app missed call.

A select number of WhatsApp users phones were infected by a sophisticated government-grade spyware, with human rights activists being reported as prime targets. The spyware used to infect the phones through missed in-app calls on WhatsApp had been identified as Pegasus, made by an Israeli cyber intelligence company called NSO Group.

WhatsApp had then put out a statement that acknowledged the threat in its older versions and encouraged its users to update their apps.

Also Read: WhatsApp Spyware Hack: Should You Be Worried?