Days after Russia announced a vaccine for COVID-19 and one of President Vladimir Putin's two daughters was reportedly inoculated in August 2020, social media is now rife with claims that Putin's daughter Katerina Tikhonova died after receiving second dose of the vaccine.

The news of Katerina Tikhonova's death was first reported on August 15 in an article published on Toronto Today but BOOM could not find any other credible news agencies reporting the death. We also went through Kremlin's official Twitter handle but found no mention of the incident.

The claims are viral just days after Russia, on August 11, announced that the country had developed a vaccine for COVID-19. Further, president Putin had announced that his daughter was inoculated with the vaccine Sputnik V. The phase III trials of the vaccine, which test its efficacy and safety are now underway.

The original article published in Toronto Today on August 15 read 'Vladimir Putin's daughter DIES after second dose of COVID vaccine.' An archive of the article is available here.

The article has been shared on social media with misleading captions.

A post shared on Facebook with a screenshot of the Toronto Today post reads 'Praying it isn't true but sadly I wouldn't be surprised. Vaccines are no good the way they are currently made'. An archive of the post is available here.

Archived versions of similar posts can be seen here and here.

The claim is also viral on Twitter with similar captions.

Toronto Today, in its article, says, "Vladimir Putin's daughter suffered unexpected side effects to the experimental Russian COVID vaccine, and has passed away in Moscow. The Kremlin has yet to make a statement on her death". The article attributes the information to 'a source within Russia's inner circles' but doesn't mention anything about the source.

The articles reports that Putin's younger daughter Katerina Tikhonova, 'suffered a rise in temperature shortly after her second injection, and then suffered a seizure. Doctors were not able to reverse the side-effects of the vaccine, and she was pronounced dead late yesterday evening'.

The Russian president had in a press conference said that his daughter had slight fever after the reported first shot of vaccine which went down to normal the next day. Similarly, After the second shot, her temperature went up a little, but then came down again," the Russian President has reportedly said at a press conference. 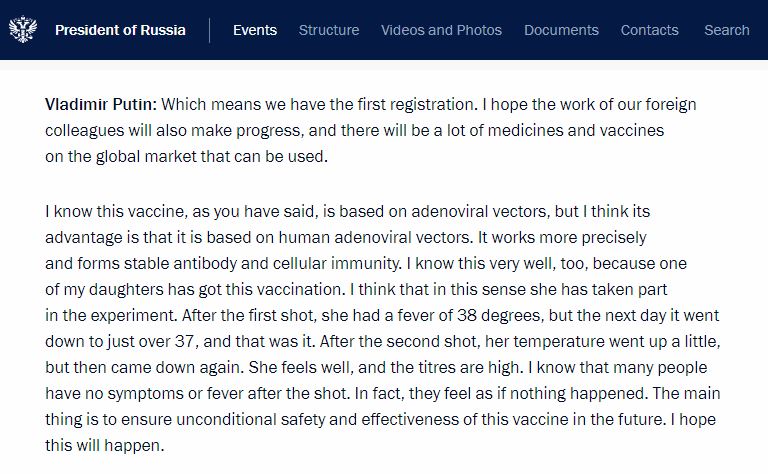 Meanwhile, the report of Toronto Today has been updated since August 15, when it was first published.

The first update at the beginning of the article reads 'Snopes and a variety of other fact checkers attacked the claims made in this article. It is important to note, despite labelling the claim as false, none of the fact-checking websites actually disproved the claim that Putin's daughter died after her second dose of Sputnik V. It is important to note Putin's Daughter has not made a public appearance since the claim was made. Further evidence is needed to completely debunk the original claim. Once she is seen in public, and the video can be independently verified, it can be said the original claim was inaccurate'.

A disclaimer at the bottom of the article reads '*Disclaimer: This article has been labelled as a Conspiracy File, and does not necessarily reflect the views of Toronto Today'.

While BOOM could not independently verify the veracity of Toronto Today's report on the death of Putin's daughter, we did not find any credible news agency report that confirms the claim made by the Toronto Today article.