Mohammed Shahrukh, the gunman who was caught on camera brandishing a gun in a policeman's face and firing several rounds in the air in Jafrabad - a riot-hit area in north-east Delhi, is absconding, contrary to earlier news reports which stated he was arrested.

As riots raged in Delhi, a vacuum formed by scarce reporting and even fewer details from the police about Shahrukh made it ripe for conspiracy theories and misinformation to thrive on social media.

On February 27, 2020 wire agency Asian News International (ANI) reported that Shahrukh is still on the run. A stark departure from its earlier reporting only two days earlier that the gunman who is reported to be in his early thirties, was arrested by Delhi Police.

Delhi Police Sources now clarify that Shahrukh has not been arrested and search for him continues. https://t.co/OgukAfvk6G

#UPDATE Shahrukh, the man in a red t-shirt who opened fire at police during violence in North East Delhi yesterday, has been arrested by Police. pic.twitter.com/c902Eno5bs

BOOM reached out to Delhi Police PRO Assistant Commissioner of Police, Anil Mittal, who corroborated that he was not arrested and also confirmed the shooter's identity as Mohammed Shahrukh.

Who is Mohammed Shahrukh?

Mohammed Shahrukh was caught on camera threatening a policeman with a gun on February 24, 2020 in Jafrabad's Maujpur area, one of the riot-ravaged areas of north east Delhi. Shahrukh shot multiple rounds and also pointed the gun at a policeman's face. Images of the same captured by photo journalists were splashed across the media.

An anti-CAA protester open fire in #Jaffarabad area. He pointed pistol at policeman but the cop stood firm. He fired around eight rounds. @DelhiPolice pic.twitter.com/0EOgkC6D40

Soon after, viral posts started doing the rounds claiming that Shahrukh, still unidentified at that time, was part of the pro-Citizenship Amendment Act (CAA) mob, which ran havoc in the area. Alt News in a fact check, debunked the claim which falsely linked the shooter to the pro-CAA side.

FALSE CLAIM 1: The gunman is an aide of BJP leader Kapil Mishra 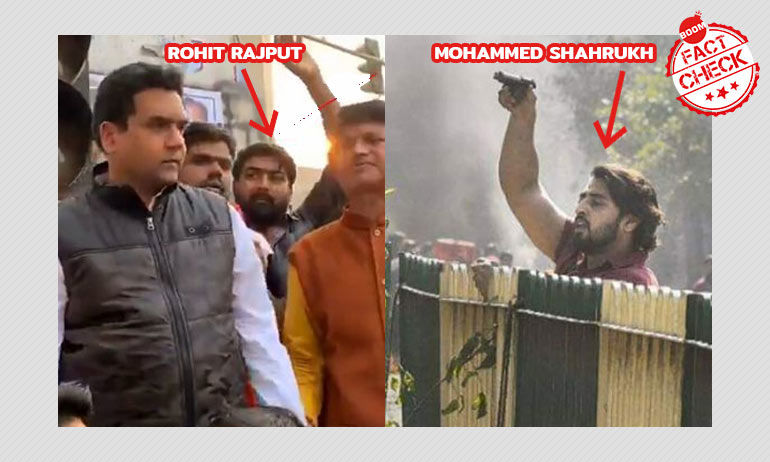 Another series of fake posts identified Mohammed Shahrukh as an aide of Delhi BJP leader Kapil Mishra. Photos of Kapil Mishra's inflammatory speech in Maujpur, where a supporter can be seen standing behind Mishra, were doing the rounds with claims that the gunman and the supporter are one and the same. The viral posts were debunked by BOOM in a fact check. BOOM identified the man as Rohit Rajput. We also analysed Rajput's Facebook account pictures which proved that they are not the same.

FALSE CLAIM 2: The gunman is a model and actor Anurag Mishra 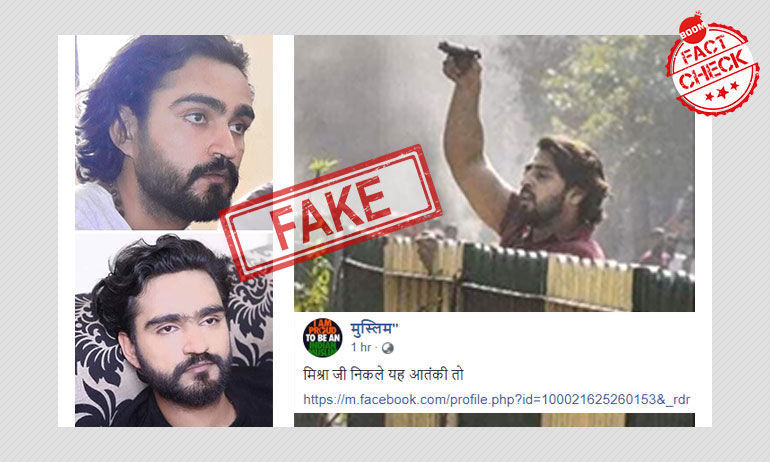 In yet another set of viral posts, Mohammed Shahrukh was misidentified as one Anurag Mishra, a Mumbai-based model and actor. Multiple posts supported the narrative with Mishra's Facebook profile link and images of Mishra where he can be seen with a beard. BOOM also debunked the same.

BOOM reached out to Mishra, an actor from Uttar Pradesh, on February 26, 2020. Mishra was unaware of the fake posts and after BOOM shared the same, he recorded a LIVE video on Facebook and threatened to take action against those making the false claim. Mishra told BOOM that he was in UP from February 18, 2020 for a film festival.

A cropped video of NDTV journalist Ravish Kumar, where he appears to be identifying Shahrukh as Anurag Mishra based on false claims made in social media, surfaced on February 27. Netizens accused Kumar of fueling rumours and identifying the shooter as Mishra despite several fact-checks proving otherwise.

BOOM reached out to Ravish Kumar, who said that he was trying to get the police to clarify the identity of the shooter.

"Since Tuesday many messages started pouring in that Shahrukh is Anurag Mishra. There were screenshots of social media posts. I replied to many of them stating that he is Shahrukh, but when I saw that it is viral then I asked police so that this Shahrukh aka Anurag rumour comes to an end,"

"In my show, I said, "Police clearly said that he is Shahrukh, but see social media is claiming that he is Anurag. We need police to speak up on his identity." You will see that in my show I have a byte of DCP, who is saying that he has been identified as Shahrukh and has still not been arrested. I did not show the pictures which claimed Shahrukh was Anurag deliberately. If I wanted him to be identified as Anurag Mishra then why would I have showed the DCP's byte?"

Below is the entire video of Kumar's Prime Time show from the same day.

FALSE CLAIM 3 : Shahrukh was born in a UP Brahmin family

A Bengali newspaper clipping from Puber Kalom, which misidentified Shahrukh as Chandral Shukla has also been doing the rounds on social media. The article is headlined as, "The real name of the man who was caught after shooting in Delhi is Chandral Shukla." (Original text in Bengali: দিল্লিতে গুলি চালিয়ে ধৃত শাহরুখের আসল নাম চন্দ্রাল শুক্লা)

It misleadingly states how the shooter is a Hindu Brahmin from Uttar Pradesh and his real name is Shahrukh Chandral Shukla. 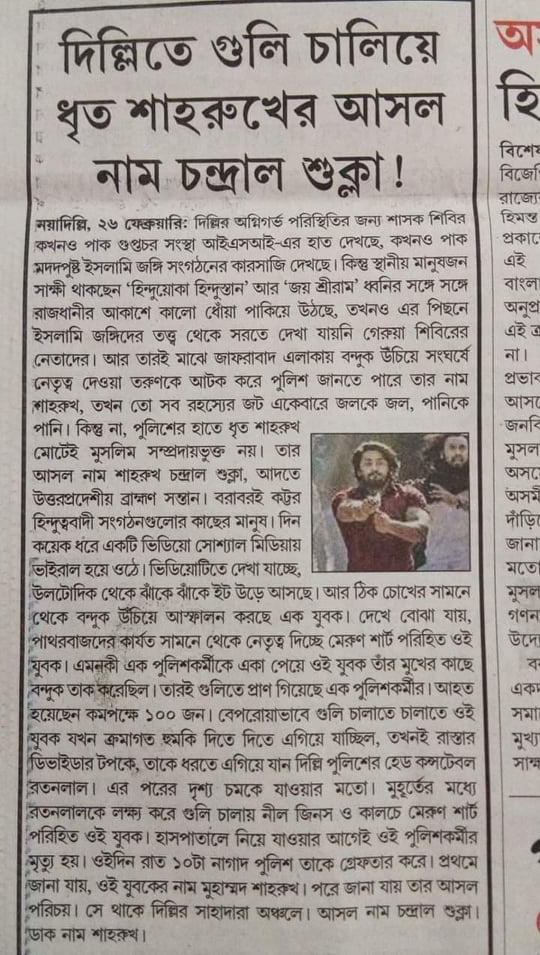 Apart from a confirmation from Delhi Police to BOOM that the gunman was indeed Mohammad Shahrukh, BOOM found a Twitter user who identified him as the same. 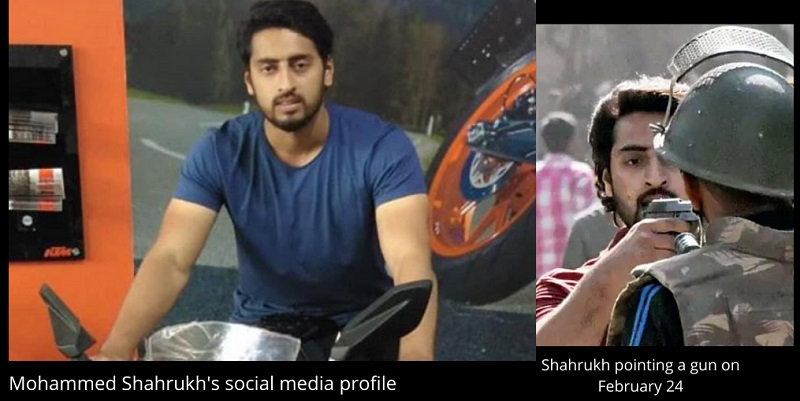 We went through the profile and was able to ascertain that the shooter and Mohammed Shahrukh are one and the same.