A photo of Rahul and Priyanka Gandhi, the sibling leaders of the Indian National Congress party, has been shared hundreds of times in multiple posts on Facebook and Twitter alongside a claim that the image shows them smiling ahead of a meeting with the family of an alleged gangrape victim in September 2020. The claim, however, is false: the photo in fact shows the Gandhis greeting each other at an airport while campaigning during India's general election in April 2019.

The photo of Priyanka Gandhi Vadra (L) and Rahul Gandhi (R) was published on Facebook here on October 1, 2020. 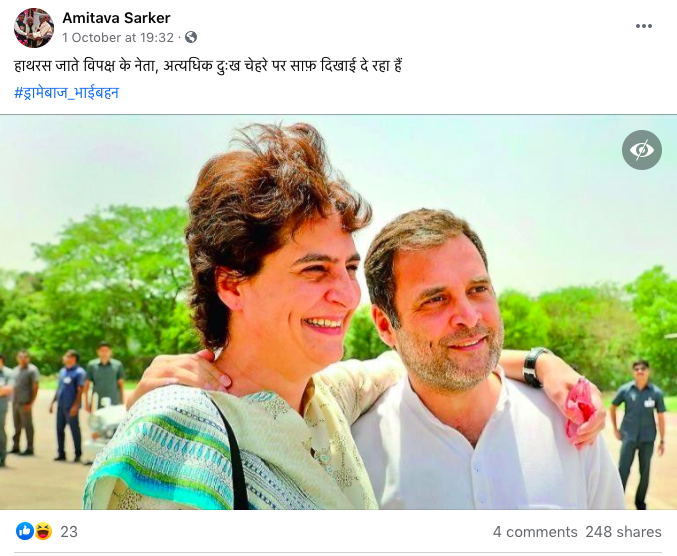 The post's Hindi caption translates to English as: "Opposition leaders going to Hathras, you can clearly see their faces how sad they are #BrotherSisterDrama."

The post circulated just days before the Gandhis met the parents of an alleged gangrape victim in the Indian city of Hathras on October 3, 2020, as reported here by Press Trust of India news agency. The rape of a lower-caste teenager allegedly by four upper-caste men occured on September 14, 2020, AFP reported here.

Reverse image and keyword searches on Google found the photo actually shows Gandhi's over a year before the false claim alleges.

The photo was published here on the official Twitter account of the Indian Nation Congress (INC) on April 27, 2019. The Hindi language tweet translates to English as: "Some golden moments in midst of elections."

Below is a screenshot comparison of the misleading post's photo (L) and 2019 INC photo (R): Rahul Gandhi also published a Facebook live video here on April 27, 2019, showing the siblings greeting each other at an airport in Uttar Pradesh (UP) during the 2019 general elections.

The caption reads: "Was nice meeting Priyanka at Kanpur Airport! We're headed to different meetings in UP."

Read Full Article
Claim :   A photo shows Rahul and Priyanka Gandhi smiling ahead of a meeting with the family of the Hathras gangrape victim.
Claimed By :  Social media posts
Fact Check :  False