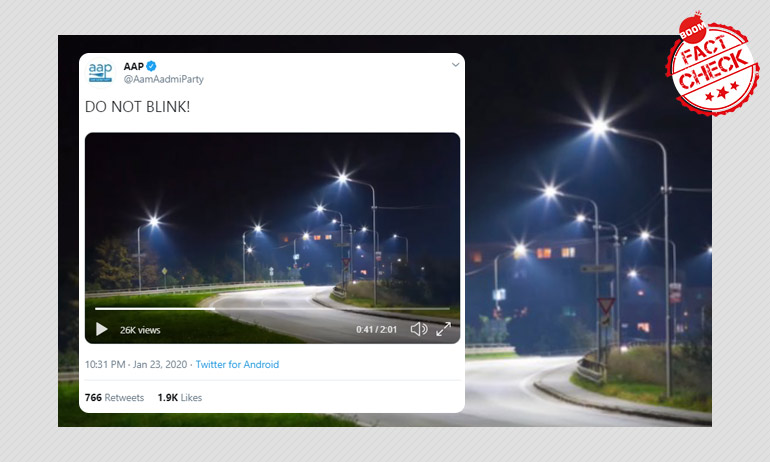 Ahead of the Delhi elections, the Aam Aadmi Party (AAP) in a campaign video added a photo from Slovakia claiming to highlight installation of street lights done by the party in Delhi. BOOM got in touch with the photographer of the picture who uploaded it on Shutterstock and confirmed that it is not Delhi, but Slovakia a country in the European Union.

The photo was used in a 2.01 minutes clip tweeted by AAP on Twitter with the caption, "Do Not Blink". At the 41 seconds timestamp, one can spot the photo which appears after the text, "2.1 Lakh Street Lights"

We received a screenshot of the photo from the campaign video on our WhatsApp helpline number (7700906111) after several users found the same photo on Shutterstock - a stock photo website.

The YouTube video uploaded by AAP has since been taken down.

@AamAadmiParty has redefined governance in the past 5 years.

I am sure y'all know this already.
But if some of you don't, then watch this.

We broke the video into key-frames and ran a reverse image search using Yandex, a Russian search engine that showed that the image had indeed been taken from Shutterstock.

The photograph was uploaded on Shutterstock with the caption, 'city exit at night with LED streetlights' by a user named Milan Noga. The same image has been used on several websites as a representational image for articles on Light-Emitting Diode (LED) bulbs.

BOOM reached out to Noga, a via Facebook who confirmed that he had clicked the photograph. Noga told BOOM, "The picture was clicked at Sereď, a small town in Slovakia. It was clicked in 2015."

After deleting the video with the picture from Shutterstock, AAP uploaded a different video replacing the said picture.