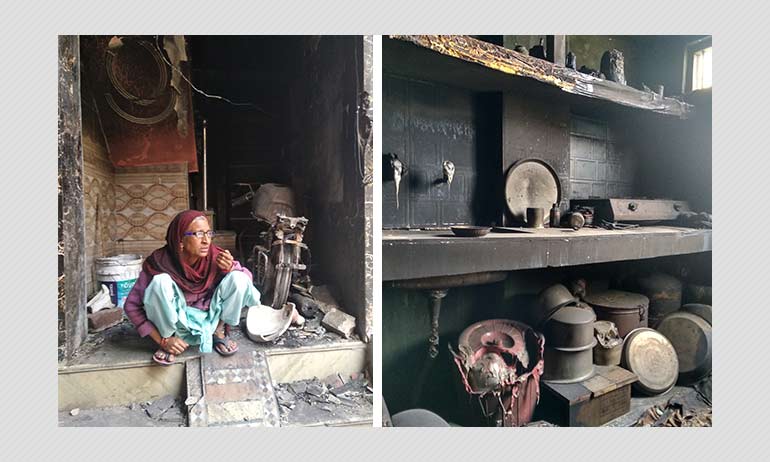 "Is my house fine? It is red in colour and has tiny steps leading up to it. Is it okay?" asks 10-year-old Ilma Sheikh from a refugee camp in Chaman Park area in Shiv Vihar.

Located in North East Delhi, Shiv Vihar was like any of the several residential areas - brick houses stuck to each other, shops lining streets, large open drains, modest homes with schools and factories in every narrow lane.

But the violence on February 25 has left an eerie silence in the lanes.

What was once a bustling congested neighbourhood of Phase 6 and 7 of Shiv Vihar has nothing but burnt homes, torched bikes piled up in corners, half shut shops with essentials thrown out and people sitting with dazed expressions.

All that's left of 10-year old Ilma's house is black walls, no windows and doors and everything charred to the ground.

Children try to salvage remains from one of the burnt shops

"We have called this home for over 30 years. And now we are scared to come back home, says Vijay Kashyap who owns a shop in the area. Kashyap and his family fled the area on the afternoon of February 25. He returned to his house in Phase 7 of Shiv Vihar on Monday to see what was left of his house.

"Everything has been looted. They even stole my daughters doll and my wife's sarees. Some papers are left so I am trying to see if i can claim compensation," he says while trying to get his dog out of the house. "He's very scared. He's an animal, what does he understand of religion and violence?," he says looking at his pet sadly.

The name plate of Mansuri House in Galli No 20 stares back at us - it's the only thing left intact in the three storey house. The narrow stairs are covered in soot, vessels burnt and gas cylinders lying around.

BOOM spoke to the family who are now recovering in two separate hospitals - Al-Hind and Govind Teg Bahadur hospital.

Tabassum, a cousin visiting the family said six people lived in the house including an infant. "On the night of February 25 just before eating dinner, we heard chaos in the lane and panicked. All of us huddled together in a corner fearing for our lives. We could hear them saying, yeh Musalman ka ghar hai (This is the house of a Muslim)".

She said the mob stormed into the house, dragged her father and two brothers out and started beating them. They were brutally beaten and her father was kicked several times."My youngest brother was hit on the leg so many times, that the doctors have said he will be unable to walk. We were rescued by our neighbours who pleaded with the mob to let the women go," she explained.

The family does not know that their house has been completely charred. Neither did we have the courage to break the news to them.

The kitchen of the Mansuri family was burnt by a mob

"We are scared to even leave the hospital. We hid in a neighbour's house for many days and then with the help of some social workers sent my brother to a hospital. That place is no longer home, where will we go?" she asks.

Mohammed Shakil, another resident returned home on Monday to ascertain the damage. Most residents of Phase 6 and 7 faced a two-fold wrath - one from the rioters and then from thieves.

"My house wasn't burnt but all jewellery and money was looted. I had collected about a lakh and a half for my eldest daughter which is now gone," he says.

"I made more than 500 calls to the police control room on the night of the riots. We were 40 people stuck in one house, but not a single police helpline responded," says SK Ansari, another resident. "They came at 3 am the next morning. By then there was nothing left. Is this how a police force of the country's capital is supposed to be?" Shakil asks.

While the remaining residents try to put on a brave face, the fear is visible everywhere.

"I don't know who were the rioters but all I know is I am now scared of entering the area. I shaved my beard, removed my skull cap and kept it away and only then decided to return to see the state of my house," says Naseer Mirza.

His neighbour Ramchand says, "They were outsiders, I am sure of it. Nobody attacks their own neighbours"

Right next to Phase 7 is a huge drain which now become a focal point for many. Every day a resident from nearby Mustafabad can be seen staring at the drain in anticipation and fear. "They are digging up bodies. At least 10 have been found in the last three days," says Mohan, who stays in the lane next to it.

Workers are unearthing bodies from the open drain in Shiv Vihar

Residents explain that the bodies are decomposed beyond recognition. "We don't know who they are. Many of our own neighbours are missing since that night so we cannot even ascertain whether its their dead bodies," he explains.

Another resident Sultan Mirza says the dead bodies found in the drain are probably of those caught in the crossfire. "Those who stay here had all fled or were locked up in their houses. Since many roads were shut, people were taking whatever roads they could to reach home. And there they met the rioting mob," he explains.

Mirza has now turned into a self appointed social worker. "I am making a database of the number of people found in the drain - with their facial features if any recognisable,"he said. "I hope it helps those who are looking for their still missing loved ones."

On the afternoon of February 25, most residents of Phase 7 heard sloganeering and scattered reports of violence.

"I was working at my dry cleaning shop and suddenly heard that a mob was approaching. We waited and started calling the police," said Shakil. He recollected that a few policemen came to the area in sometime and dispersed the crowd and then the policemen left in 10 minutes.

"After that, the police did not come for three days. On the night of February 25, a huge mob started entering homes, beating up people and torching bikes and vehicles. Everyone in the area was constantly trying to call the control room. Not a single police officer responded," he said.

Many motorbikes owned by residents were set alight by the mob

With no political party or government reaching out to rehabilitate, the residents have started the difficult step on their own. Many locals are trying to contact relgious and charitable organisations for donations or relief aid. One such resident is Sultan Mirza who has managed to bring in organisations from karnataka.

"We are trying to get money from charitable organisations in Bangalore, Tamil Nadu to donate money to us. We will also try and rebuild the two mosques. In such pressing times, faith reassures people," he says.

"A broken mosque only puts fear in both communities. We hope we are able to put it back together."

Meanwhile, Ilma offers biscuits distributed at the relief camp and asks, "I had prepared for my exams but now I don't know what has happened to my books. "If you go there can you check if my school books are intact? I really like to study."