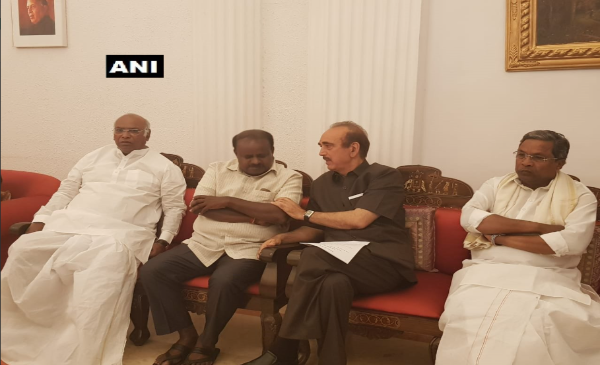 It is a case of so near, yet so far for the Bharatiya Janata Party. The BJP who were cruising away to form the next government by crossing the psychological 100-seat mark were caught off-guard when the incumbent Congress threw a googly post 2 pm on Monday. The Congress came out publicly to accept that it does not have a mandate to form the government and offered to support a JD(S)- led government in the state.

According to the last updated official numbers by the Election Commission, the BJP is likely to settle around the 104-mark, the Congress will get 78 seats while the JD(S) at 37 seats. Put together, the JD(S)-Congress alliance will have 115 seats while the BJP will fall short by 8 seats. Polling in two seats are yet to be conducted in two more seats. 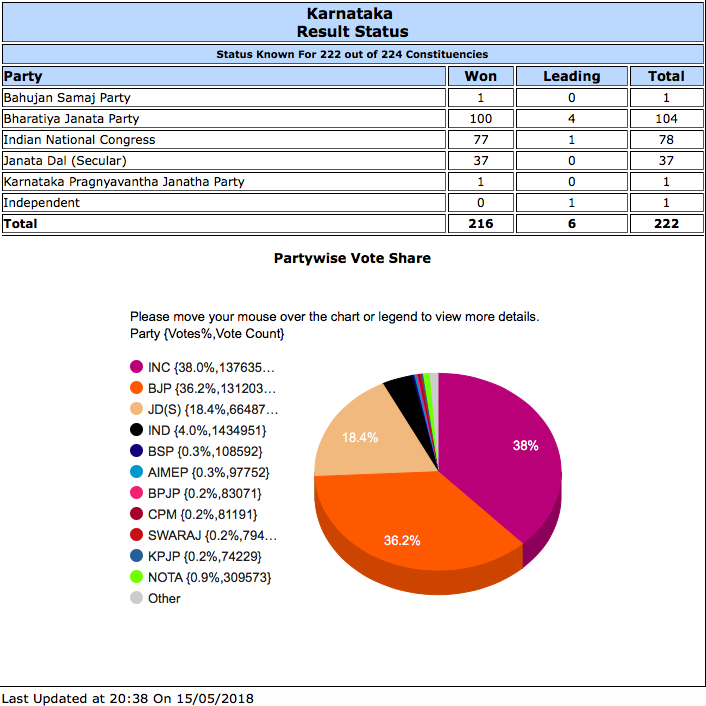 The JD(S) also responded swiftly accepting the Congress offer and said that the only mandate of this alliance is that HD Kumaraswamy be made the chief minister. Speaking to BOOM, Tanveer Ahmed, General Secretary, Janata Dal (Secular) confirmed that the party had agreed to an alliance with Congress.

"People raising fingers about how BJP has more seats and hence should "legally" form government are ill-informed. The constitution says the party with more than 51 percent shares of the seat can form government. So if that means two parties who come together to do so, then there is no question of us going against any law,” Ahmed explained.

While the JD(S) may have wanted to win more seats, it has no reason to be unhappy with its performance either. The BJP is in no position to offer the party the post of chief minister while the Congress has already conceded that it does not have the mandate to lead the government. The only worry for the party is to ensure that it manages to keep its flock together and does not see mass desertions if the Governor overlooks its alliance strength and gives the BJP an opportunity to form the government.

But the BJP is in no mood to give up the state so easily after coming so close to the half-way mark of 112 seats. Both Prime Minister Narendra Modi and BJP President Amit Shah made their intentions clear to fight it out in their address to party workers at their headquarters in Delhi.

I thank people of Karnataka for voting BJP as the single largest party. This mandate clearly reflects that Karnataka has rejected Congress's corruption, dynastic politics and divisive casteism.

BJP's Chief Ministerial prospect BS Yeddyurappa also met the Governor and sought two days time to prove his majority in the assembly. But NDTV reports that the Karnataka Governor has told all party leaders that he can't take decision unless the Election Commission hands over the certified copies of elected legislators to him.

For the party, the state is their gateway to the south and represents their aspirations to make a big statement before they launch their campaigns in key north indian states of Rajasthan, Madhya Pradesh and Chhatisgarh and the 2019 general elections.

Even as the debate raged on which party the Governor should first invite to form the government, BJP's detractors were quick to share the party's senior leader Arun Jaitley's Facebook and Twitter posts from March 2017 where he had argued in favour of the Governor's right to invite the majority coalition to form a government in case of a hung assembly. This was in context of the Goa verdict where the BJP despite lower number of seats as compared to the Congress had managed to form the government in alliance with smaller parties and independents.

BJP govt appointed Governors didn’t invite Single Largest Party in either Goa, 2017 (INC, 17 out of 40 seats), Manipur 2017 (INC 28 of 60) or Meghalaya 2018 (INC 21 out of 60). Union ministers gave arguments supporting them. The precedent is there to follow, right? #Karnataka pic.twitter.com/F4fXKxAhix

This history of forming a coalition government is not new to the state. In the 2004 assembly elections, with no party crossing the magic majority seat mark, Congress and JDS came together to form a government. But in 2006, JD(S) broke this coalition and joined hands with the Bharatiya Janata Party making HD Kumaraswamy the chief minister.

This coalition of BJP - JDS came with a condition that Kumaraswamy would share the chief minister's position with BJP's Yeddyurappa. A year later, in 2007, Kumaraswamy broke this promise and refused to give up the CM's post to BJP leading to great political turmoil and the application of the President's rule in the State.