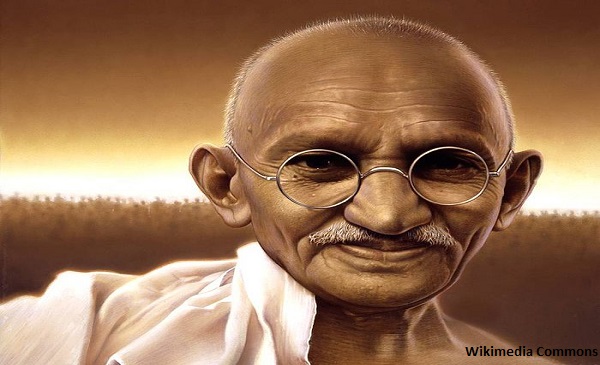 BJP president Amit Shah described Mahatma Gandhi as 'Chatur Baniya' while addressing a gathering in Raipur on Friday. Shah made this observation while reinforcing an often repeated quote of Gandhi who wanted the Congress to be disbanded post Independence.

"The Congress is not a party based on one ideology or one principle, it is a special purpose vehicle to gain independence…this is why Mahatma Gandhi with foresight, he was a very clever baniya, he knew what was going to happen, he said immediately after independence that the Congress should be dissolved. He didn't do it, but some people are now completing the job of dissolving it. He had said this because the Congress had no ideology, was not formed based on a principle, and did not have any principle to run the country or government," he said, reports The Indian Express.

Reacting sharply to the attack, Congress spokesperson Randeep Surjewala demanded an apology from the BJP president as well as Prime Minister Narendra Modi. "We demand that Amit Shah, BJP and Prime Minister Narendra Modi apologise to the country, the families of freedom fighters and every citizen for insulting the freedom movement and the father of the nation," he said.

This is not the first time Gandhi's quote has been repeated. In 2013, the late Tamil Nadu chief minister J Jayalalithaa had presented documentary evidence to Congress members in the state assembly to validate her minister K P Munusamy's argument that Mahatma Gandhi wanted to dissolve the century-old political party after Independence.

But did Gandhi actually want the party to be disbanded? What else did he say about the Congress? On searching the archives, it is clear that the claims are true and Gandhi's views were discussed with the Constitution Committee of the party, who met on January 26, 1948 . The committee requested Gandhi to prepare a draft embodying his proposals which he undertook to hand over on January 30, 1948. Accordingly, the draft constitution was handed over to the party on January 29, 1948 but was made public several weeks later post Gandhi's death.

Part of the Collected Works of Mahatma Gandhi, Volume 98, also called as his Last Will and Testament, Gandhi gave the call for the disbanding of the Congress a day before he was assassinated on January 30, 1948. Gandhi wanted the existing structure of the Congress to be converted into a Lok Sevak Sangh. Given below is the extract. 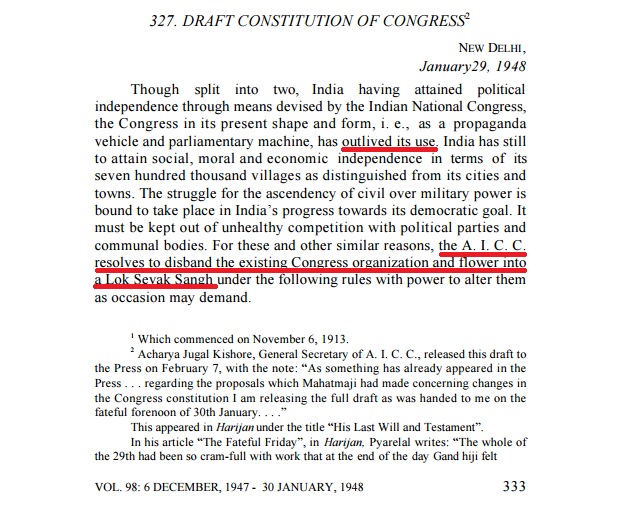 Extract taken from the Collected Works Of Mahatma Gandhi - Volume 98

The Mahatma was determined to reform the Congress institutionally as can be seen in the subsequent portions of the extract (read pages 334-335 ) where he laid down the structure of the Lok Sevak Sangh. Unfortunately, his assassination a day after he submitted the draft meant that the plan could never take off. The Congress leaders discarded Gandhi's advice and none was heard about the proposal thereafter.

But can this statement be looked at in isolation. While politicians like Amit Shah have used the quote to rub salt to the wounds of an already depleted party, there is no doubt that Gandhi was disappointed with not just the Congress but also politics on a whole after winning a long and tough battle against the British for independence.

In the same volume of the Collected Works of Mahatma Gandhi, the father of the nation shares his disillusionment and gave several warnings to the party, political class and the citizens of the country.

M P Mathai in his article "What Swaraj Meant For Gandhi" writes that while "for political independence, Gandhi worked with and through the Indian National Congress, but there existed serious philosophical and ideological differences between Gandhi and other prominent leaders of the Congress, particularly Nehru." Nehru as the country's first prime minister thought Gandhi's ideas of Hind Swaraj were "completely unreal" and declared that neither he nor the Congress had ever considered the picture presented in it.

Gandhi wanted constructive programmes and the formation of organisations that can work for the economic revival of rural India. A question arose in the constructive works committee meeting on December 11/12, 1947 on whether the constructive workers should take part in politics? In his reply, Mahatma Gandhi was scathing in his views of how he perceived politics and the Congress at that time. 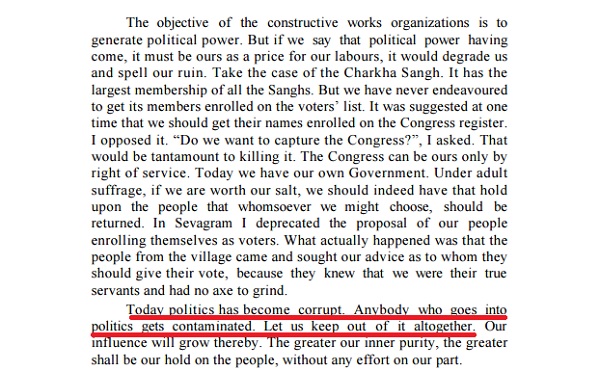 Extract taken from the Collected Works Of Mahatma Gandhi, Volume 98

In an article written for the Harijan dated January 27, 1948 and published 2 days after his death on February 2, 1948, Gandhi started by saying that "Indian National Congress which is the oldest national political organization and which has after many battles fought her non-violent way to freedom cannot be allowed to die. It can only die with the nation." But he was disappointed that the Congress "In its difficult ascent to democracy, it has inevitably created rotten boroughs leading to corruption and creation of institutions popular and democratic only in name."

Gandhi wanted the party to remember that they are the servant of the nation, Khudai khidmatgar—God's servant and gave a crucial warning of the demise of the party in future. 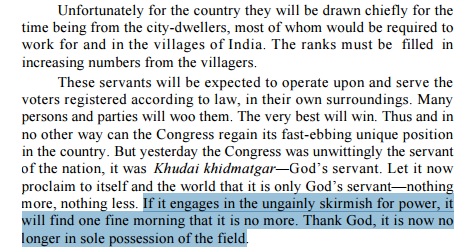 Extract taken from the Collected Works Of Mahatma Gandhi, Volume 98

In various interactions with his followers and the press, Gandhi made no secret of his dismay of the rising corruption in the country. And this was not just limited to the Congress or the political class but even the citizens came under his scanner. Replying to another question about why he does not want constructive workers to join politics, he said, " But in general there is so much corruption today, that it frightens me. Everybody wants to carry a lot of votes in his pockets, because the votes give power." He also felt that having won freedom, the citizens had forgotten their duty to the country.

"I have it from very trustworthy sources that corruption is increasing in the country. Is everyone then going to think only of himself, not at all of India?," Gandhi wrote in one of his letters.

The flow of events since gaining independence on August 15, 1947 to his last days in January 1948 gives an insight on why he came to the conclusion that disbanding the Congress would be a better idea. While it is not clear what he exactly intended to do with the party machinery in power at that time, his writings towards the end of his life show that he wanted the mighty organisational structure of the All India National Congress to work towards building the nation without the trappings of power. But that was not meant to be with his assassination cutting short his life.

Maybe the Congress and the BJP instead of trading charges would do well to read the writings of 'Chatur Baniya' Mahatma Gandhi once again.

ALSO READ: Did Indira Gandhi Shy Away From Demonetisation As Alleged By PM Modi ?