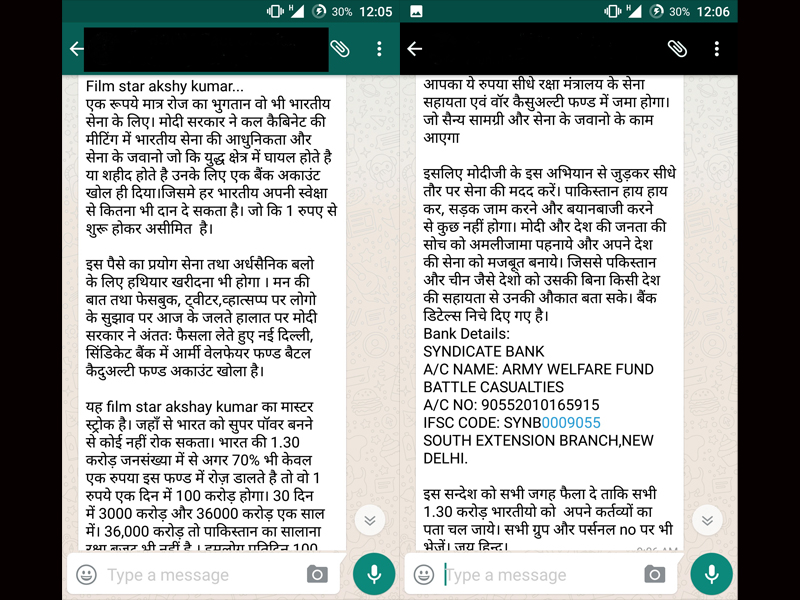 The above WhatsApp forward in Hindi, about actor Akshay Kumar's message urging Indians to voluntarily donate to a welfare fund for the army, is partly true.

The bank account details provided in the message are also true.

However, the message, which has been translated from an English WhatsApp forward, mixes up two different initiatives to support defence forces in India. (Army Welfare Fund Battle Casualties and Bharat Ke Veer corpus).

The WhatsApp forward in both Hindi and English say that funds will also be utilised to buy weapons for the army, which is incorrect, going by the army's statement below .

BOOM tries to answer two questions to clear the confusion.

1. Is there a welfare fund for the Indian Army and is the "Army Welfare Fund Battle Casualties" legitimate?

In September 2016, the Indian Army on its official Twitter page posted a clarification that said it would create a new bank account called the Army Welfare Fund Battle Casualties (AWFBC). Donations received will be used to support the next of kin/widows/dependents of soldiers who have been killed in battle. This was done in the aftermath of a deadly avalanche in Siachen in 2016 that claimed the lives of many soldiers and the subsequent outpouring of support from citizens who wished to contribute.

In addition, the bank mentioned in the WhatsAPP message, Syndicate Bank, also issued a statement on the same. (click here) 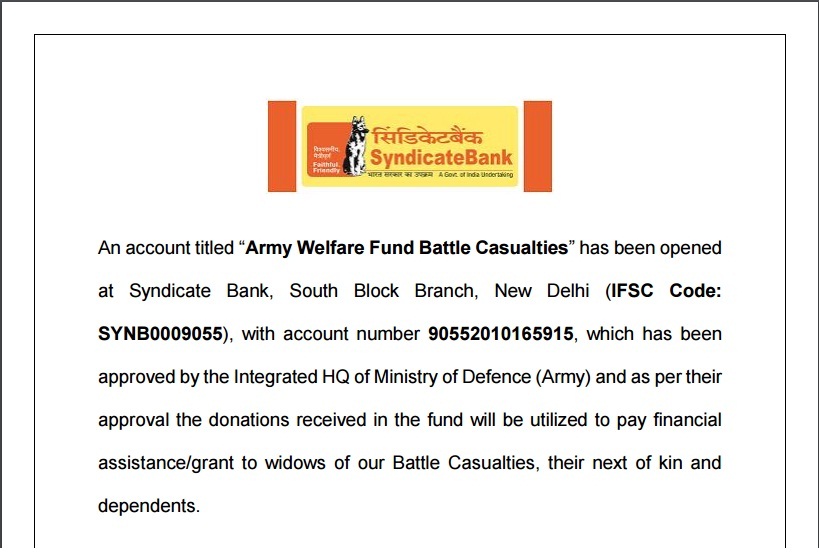 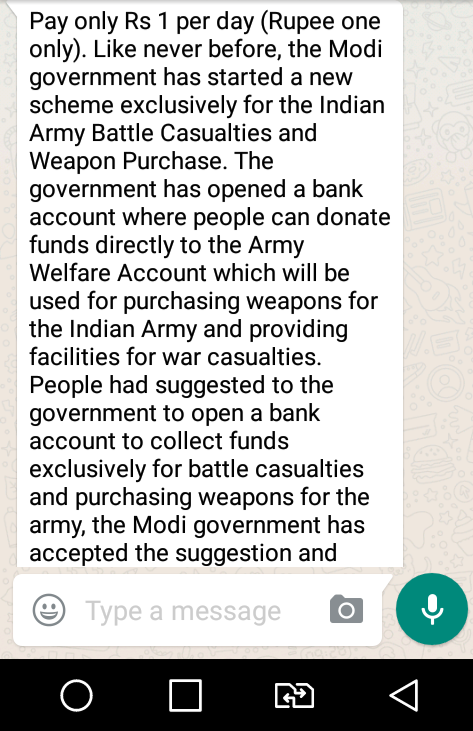 2) What does Akshay Kumar have to do with it?

Akshay Kumar has been instrumental in setting up a separate initiative called 'Bharat Ke Veer'.

In January 2017, Kumar posted a video on Twitter pitching an idea for a website or a mobile app that could accept voluntarily contributions to families of martyred soldiers. Kumar suggested that the bank details of such families be available on the website and even recommended capping the donation at Rs. 15 lakh per soldier. The video received over 45,000 likes and was widely retweeted.

Here I am standing up AGAIN for something I truly believe in coz THEIR well-being MATTERS to ME.I'd love to know if it does to YOU as well? pic.twitter.com/3Y5NPmTJhg

Subsequently, with the support of India's Ministry of Home Affairs, the "Bharat Ke Veer" website was created. 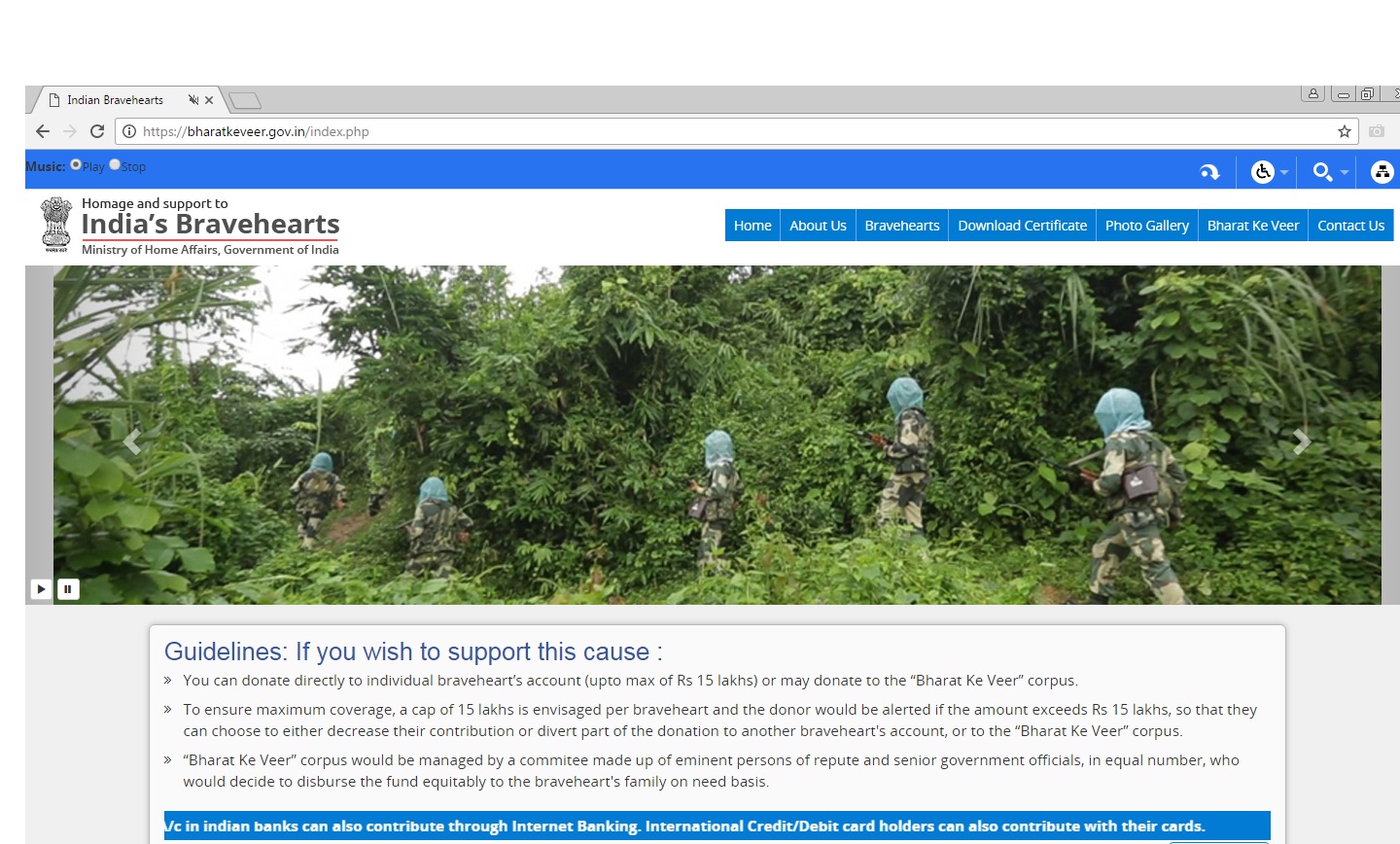 BOOM thinks the Hindi WhatsApp forward was tweaked after the actor posted the video on Twitter.

In addition to these two resources, defence personnel in India also have the National Defence Fund , which was set up in 1962. The fund is entirely dependent on voluntary contributions from the public and does not get any budgetary support. The fund is used for the welfare of the members of the armed forces (including para military forces) and their dependents.

(A previous version of this story inadvertently mentioned a 'Bharat Ke Veer' app, the fund only has a website. The error is regretted. )

Akshay Kumar Battle India Indian Army Soldiers Syndicate Bank War WhatsApp
If you value our work, we have an ask: Our journalists work with TruthSeekers like you to publish fact-checks, explainers, ground reports and media literacy content. Much of this work involves using investigative methods and forensic tools. Our work is resource-intensive, and we rely on our readers to fund our work. Support us so we can continue our work of decluttering the information landscape. BECOME A MEMBER
📧 Subscribe to our newsletter here. 📣You can also follow us on Twitter, Facebook, Instagram, Youtube, Linkedin and Google News 📝Stay updated with all our latest fact check stories.