By - Krutika Kale
Loading...
|  1 April 2018 5:03 AM GMT
The tradition of newspapers in India attempting to pull a fast one on their readers on April Fools' Day has been on the decline over the past few years. While the rise of misinformation and disinformation can be credited for this, increasingly news outlets themselves cannot seem to discern fact from fiction. Barely four months into 2018 and marquee names of Indian media have already fallen for misinformation. We list some instances below. 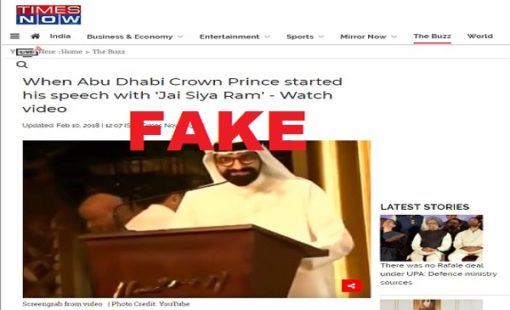 Several Indian media outlets incorrectly reported that Pakistan’s Senate had recognised Mandarin as an official language in the country. The confusion stemmed from a resolution moved in the Senate of Pakistan by senator Khaleeda Parveen on February 16, 2018. The resolution recommended providing Mandarin courses for current and future Pakistani CPEC staff.  Pakistani News outlet Abb Takk was the first one to put the misinformation via Twitter. This was taken up by ANI who wrote an entire story citing Abb Takk. News outlets such as News18 , Republic TV, Times Now, Zee News ,IndiaToday; Financial Express , DNA and Outlook  picked up the story based on ANI’s report. Read BOOM's story here. Times Of India Falls For A Photoshopped Circular 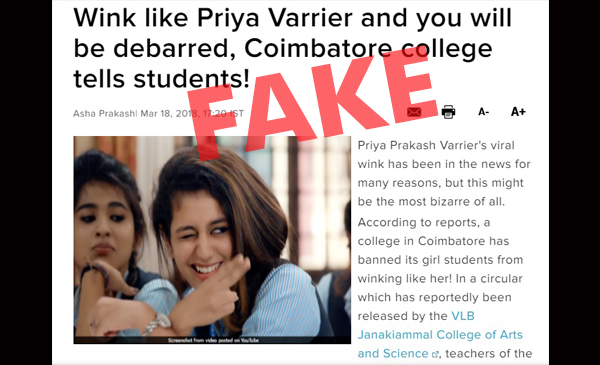 The Times Of India (TOI) fell for a photoshopped circular claiming to be from the VLB Janakiammal College of Arts and Science, in Coimbatore, banning its female students from winking like Malayalam actor and Internet sensation Priya Prakash Varrier. VLB Janakiammal College of Arts and Science, on its website and Facebook page have debunked the fake circular stating there were no new circulars issued in 2018. Times of India removed the story on its site after BOOM’s fact-check. The paper has stated that the article was removed as the content was found to be incorrect. Read BOOM's story here.
disinformation fake news featured Indian news websites Mandarin media Pakistan Priya Prakash Varrier reports
If you value our work, we have an ask: Our journalists work with TruthSeekers like you to publish fact-checks, explainers, ground reports and media literacy content. Much of this work involves using investigative methods and forensic tools. Our work is resource-intensive, and we rely on our readers to fund our work. Support us so we can continue our work of decluttering the information landscape. BECOME A MEMBER
📧 Subscribe to our newsletter here. 📣You can also follow us on Twitter, Facebook, Instagram, Youtube, Linkedin and Google News 📝Stay updated with all our latest fact check stories.