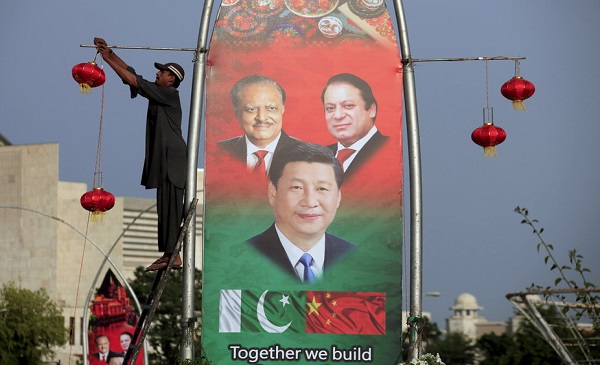 April Fools’ Day is the best occasion for fake news. Even with the whole world haunted by the flood of “alternative facts”, the media still maintains its tradition of teasing readers with harmless prank stories, which are usually too unreal to be taken seriously.

Some of the best ones this year include Trump buying the iconic Liberty Hall of Dublin and the UK, following Brexit, withdrawing from Eurovision.

But one prank by a Pakistani newspaper blurred the boundary between the light tone intended for an April Fools’ Day prank and the more serious one for discussion of geopolitics in Asia. On April 1, Pakistan’s Express Tribune published a prank piece on naming the new capital airport after Xi Jinping, China’s president “as a token of appreciation for the multi-billion dollar China-Pakistan Economic Corridor.”

They fell for it

The article concludes with an animated GIF picture of Xi and First Lady Peng Liyuan waving to Pakistan Prime Minister Nawaz Sharif over a banner saying April Fools’ Day, apparently a spoofed version of a video taken during Xi’s state visit to Pakistan in 2015.

But many Pakistanis, including an opposition party leader, nevertheless fell for the joke, harshly criticising this ridiculous decision and “expressing serious reservations”. The Pakistani opposition leader even issued a formal statement in a strong condemnatory tone.

Meanwhile, Indians had a good laugh, with media cheerily reporting how the prank even fooled a high-level official of Pakistan, and others joining in the hilarity on Twitter.

The light-hearted criticism and laughs about this prank, coming from both Pakistanis and Indians, perfectly reflect the complicated relationship between China, Pakistan and India.

As China’s only “all-weather friend” and “China’s Israel”, Pakistan remains China’s biggest arm importer. It also plays a key role in China’s counter-terrorism efforts and is a strategic route for China’s ambitions in the Middle East and Africa. China, meanwhile, is Pakistan’s biggest trade partner.

The China-Pakistan friendship has reached a new height since 2015, when Xi announced the US$46 billion China-Pakistan Economic Corridor project (CPEC). The project is part of the massive One Belt, One Road Initiative, which aims to increase China’s prominence in Eurasian countries and is considered a geopolitical game changer for Asia and beyond.

Most recently, opposition to the CPEC project is a common narrative of Indian media, with the Hindustan Times on March 23 citing foreign secretary S Jaishankar as saying that India has “sovereignty” issues with the corridor.

India has good reasons to be worried. As economics scholar Panos Mourdoukoutas argues in Forbes magazine, in this triangle relationship, “Pakistan’s gain is India’s loss”. In the case of CPEC, the construction will go through Pakistan-occupied Kashmir, the key source of conflicts between Pakistan and India.

Both as major powers in the region and developing countries with the fastest economic growth in the world, China and India share their own unsettled territorial disputes along the Himalayan-Tibetan area. The two countries are also competing in economy, military, diplomacy and many other strategic fields.

The tension between the two was most recently seen in China’s repeated opposition to India’s bid to join the Nuclear Suppliers Group, and India’s alignment with the US and Japan against China on its controversial moves in the South China Sea. If there is an all-weather friendship between China and Pakistan, with India, China has what could be called an all-weather rivalry.

In this ongoing tug-of-war, notes Andrew Small, author of The China-Pakistan Axis: Asia’s New Geopolitics, Pakistan is China’ pawn against India. So India has been willing to seek more leverage by serving as the pawn of the US against China.

But as Trump’s America puts everything into uncertainty, the changing balance of power between the three Asian countries worries more than just India. Behind the prank stories of Trump buying Dublin’s iconic building, the UK withdrawing Eurovision and Pakistan’s airport being named after Xi is the same fear: a changing world order.

Any of these prank stories may be a harmless teaser that the world can simply laugh off, but the context within which these pranks are born – and thus their intent – is serious indeed.

For now, both Pakistan and India can be assured that the Islamabad airport will not be renamed after Xi or any other Chinese leader. But a more assertive China that upends not just the regional order but also global politics is not out of question, and it is unclear how prepared the world is for this geopolitical game changer.

Even an April Fools’ Day prank can have a chilling back story.