Facebook posts shared thousands of times claim that the United States was the only country to end slavery. This is false; experts say multiple countries banned the practice in the 19th century, and one historian called the claim "absurd."

"Slavery used to be a normal throughout the world. America was the ONLY country that ended it! Black people owned slaves too. White people were slaves too. How many of these morons from black lives matter know that?!" a July 13, 2020 Facebook post reads. 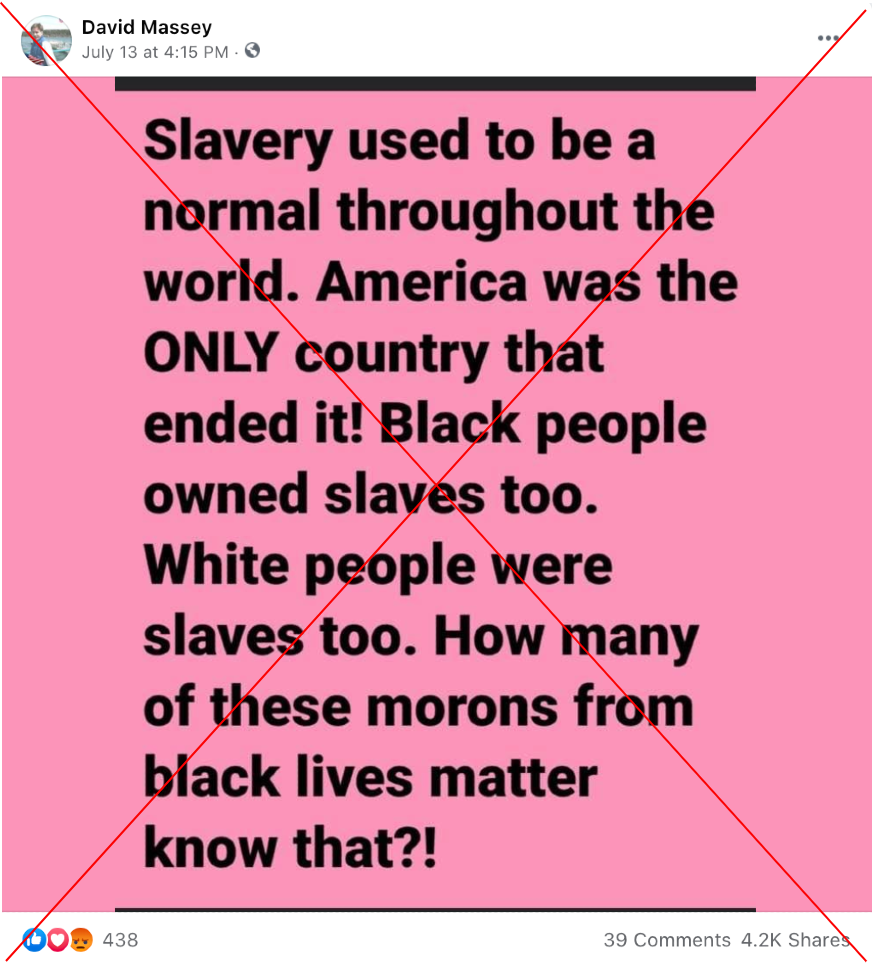 Also Read: Donald Trump Did Not Give Speech On Racial Superiority Of White People

The claim comes during a national reckoning over the country's history of slavery and racism after the May 25 death in police custody of African American George Floyd. His death sparked weeks of protests and increasingly widespread support for the Black Lives Matter movement.

The US is not unique in having abolished slavery. In fact, many countries -- England, Mexico, Peru, Colombia, Chile, France, and the Danish West Indies, for example -- managed to do so without a civil war and a death toll of 750,000 as happened in the United States, Kay Wright Lewis, associate professor of history at Howard University, told AFP in an email.

"Slavery has been practiced by every nation in some form or other across time," said Wright Lewis, whose research focus includes slavery and abolition. She added that American slavery is distinct because of the unprecedented brutality toward indigenous and then African enslaved people, "as was the usage of race as a determining factor of who could be enslaved."

"At the time that slavery began here in America, British Europeans had already determined that slavery was wrong, immoral, and un-Christian," she said.

"...We have nothing to be proud about there, that it took so many lives and so much violence to end an institution that everyone in the world agreed was wrong."

Eric Foner, DeWitt Clinton Professor Emeritus of History at Columbia University, called the claim that the US was the only country to end slavery "absurd."

"Every country in the western hemisphere -- Brazil, Mexico, Cuba, etc etc ended slavery in the 19th century, as did France, Britain, Denmark and other colonial powers," he said in an email.

"The Irish were sent to the Caribbean as punishment and as the losers in war with the English, but as terrible as they were treated, they were indentured servants, not slaves," Wright Lewis said.

There were less than a few hundred African Americans "that supposedly owned slaves," Wright Lewis added, but many were their family members held as slaves to protect them, so the statistics may be "ill-informed."

African people in Africa also owned slaves, and while it was practiced differently than in America, "it was bondage nonetheless" she said.

Foner agreed: "Black people -- a few -- did own slaves in the US but no person legally defined as white was held as a slave in the US. There were 'white' slaves in ancient Rome and the Medieval Mediterranean but the concept of whiteness did not exist then. In colonial US there were many white indentured servants but that is not the same as slavery."

Read Full Article
Claim :   The USA was the only country to abolish slavery.
Claimed By :  Facebook posts
Fact Check :  False