Hundreds of new and old Facebook posts shared thousands of times in Africa have credited US President Donald Trump with a rambling "speech" full of racist remarks about Africans and Arabs. AFP Fact Check found the content has also circulated elsewhere over the years and has been attributed to other world leaders, including former apartheid president PW Botha whose 1985 "Rubicon" speech seems to have been the basis for various versions of the hoax.

The posts generally begin in the same way, with an introduction in uppercase letters that reads: "TRUMP HAS SPOKEN AGAIN. JUST THE TRUTH. DONALD TRUMP'S SPEECH ON 'RISE UP AFRICANS'."

Archived examples can be seen here, here and here.

Screenshot taken on July 16, 2020, showing a false Facebook post claiming to be a Trump speech on Africans

The "speech" contains offensive comments about Africans and claims the continent is "on the verge of collapse", with Trump's name included at the end.

Data from CrowdTangle, a social media analysis tool, shows how this version of the claim has seen more reposts with each spike in activity since August 2019 when it seemed first to gain traction. This November 2019 post, for example, has been shared more than 12,000 times.

Screenshot from CrowdTangle showing how posting activity of the "speech" claim has increased with each online traffic spike since August, 2019

By searching selected paragraphs, AFP Fact Check found a previous version, beginning with another introduction in uppercase letters that reads: "DONALD TRUMP'S SPEECH ON WHY HE HATES AFRICANS & ARABS". 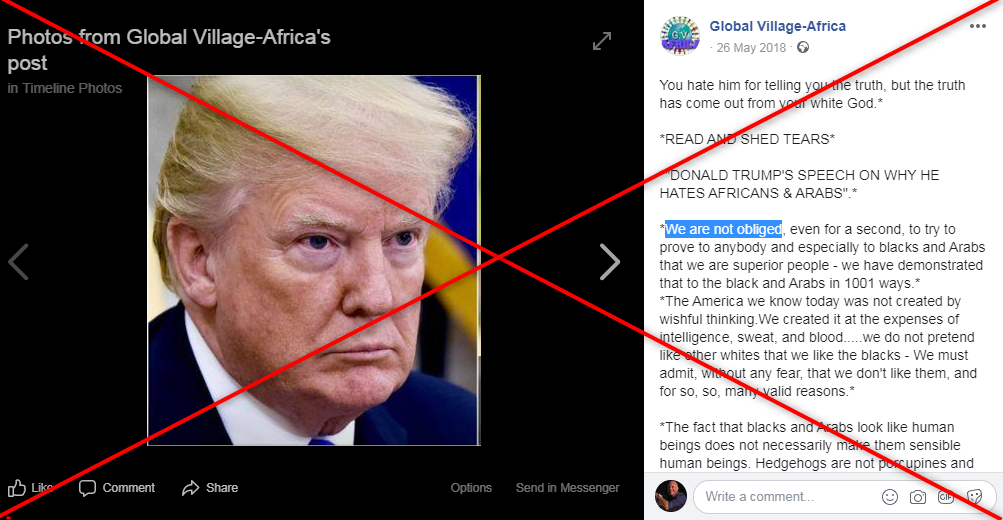 Screenshot taken on July 16, 2020, showing a false Facebook post, also claiming to be a Trump speech, this time on Africans and Arabs

The content of the two texts is strikingly similar, although the earlier version is longer, opens differently and disparages Arabs as well as blacks. Again, Trump is identified as the author at the end. 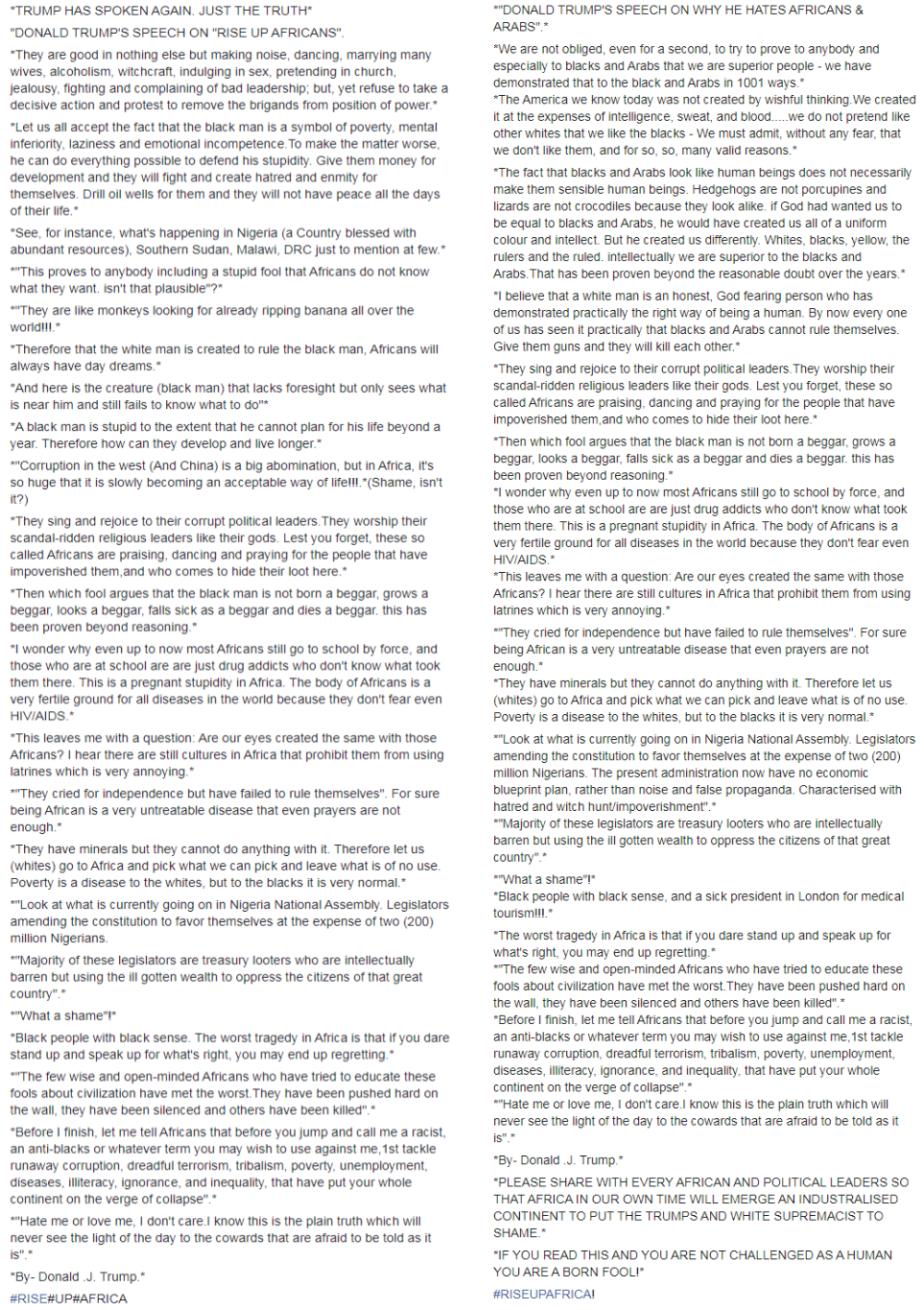 Screenshots taken on July 20, 2020, comparing two similar "speeches" falsely said to have been delivered by Trump

None of the hundreds of posts say where or when either of the "speeches" was supposedly delivered or published.

AFP Fact Check searched an online archive of Trump's tweets and could find no mention of the "speeches" or extracts from them.

The older claim, which targets Arabs as well, was also shown to be false by two US fact-checking organisations here and here in 2015 when social media first began linking Trump actively to the text.

Further evidence against the claim can be found in 2014, when a spate of posts, like these here and here, passed off the same "blacks and Arabs speech" as the work of Israeli Prime Minister Benjamin Netanyahu. It was the same year that Israel launched Operation Protective Edge in Gaza. 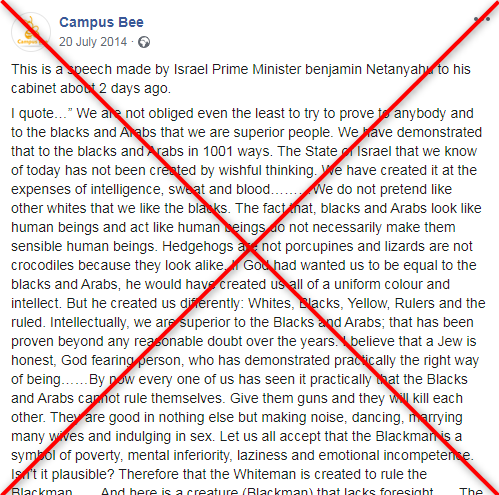 A closer reading reveals that certain words, names and locations were changed or added to give it an Israeli context.

AFP Fact Check found an online reference to an email from 2009 that was circulating in South Africa and claiming to share a reprinted speech given by former apartheid president PW Botha in 1985 in the coastal city of Durban. The email further claimed, without specifying a date, that this speech was published in the country's flagship weekend newspaper, the Sunday Times.

The wording of the text in that email (since reproduced in Facebook posts here and here) bears an almost perfect resemblance to the claim doing the rounds on Facebook more than a decade later in Trump's name.

Screenshot taken on July 16, 2020, of an opening extract from a fabricated speech that circulated online and in an email claiming to be apartheid prime minister PW Botha's Rubicon address

But neither claim is true -- Botha's actual speech, known as the Rubicon address, is different. While it certainly caused shockwaves at the time for keeping South Africa on the apartheid trajectory, it was not the one found in the hoax email.

S
creenshot taken on July 29, 2020, of an opening extract from the real Rubicon speech

Secondly, the fabrication was never published in the Sunday Times. The newspaper has issued denials at least twice over the years, according to an exchange of correspondence between editors and the country's Press Ombudsman.

The first of these occasions saw a printed denial in the paper's Hogarth column in 2004. The second denial, on the advice of the ombudsman's office, was published online in 2010 after the hoax had begun resurfacing and the title was asked to put up a fresh denial on its website.

Screenshot taken on July 16, 2020, of an email exchange in 2010 between the Sunday Times and South Africa's Press Ombudsman about the hoax Rubicon speech -- the blue circle indicates the date of an earlier denial that was published in the paper's Hogarth column in 2004

The evidence, therefore, shows that this earliest fabrication was more than likely the precursor to all the other versions of the claim.