A video that shows a police officer fatally shot a dog on a street has been viewed tens of thousands of times in multiple Facebook posts in June 2020 alongside a claim that it was filmed in the US 'today.' The posts were published after protests were held across the US over the death of George Floyd, an unarmed black man who died in police custody in Minneapolis in May 2020. The video has been shared in a misleading context; the footage has circulated in reports since 2013 about an incident in California.

The 43-second clip shows a dog approaching uniformed police officers after they detained a black man on the street. One police officer is then seen shooting the dog dead with his gun.

The post's Sinhala-langA20uage caption translates to English as: "Situation in America today / The way a dog that came forward on behalf of its master was killed." 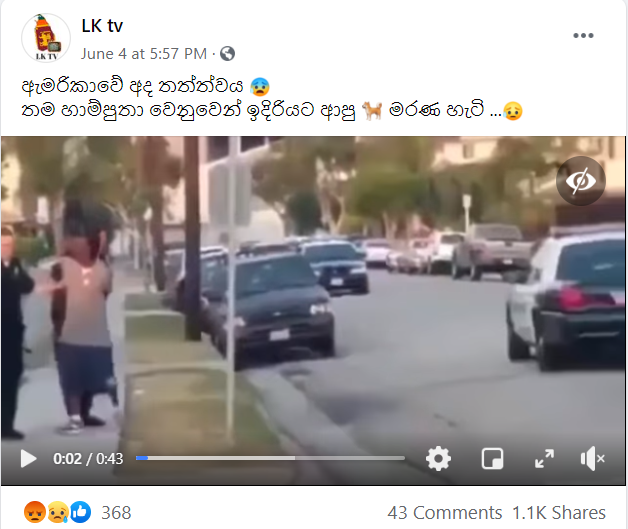 The post was published after protests broke out across the US over the death of George Floyd in police custody in Minneapolis on May 25, 2020. His death also sparked global protests against racism and police brutality, as reported here by AFP.

The video was also shared here and here alongside a similar claim.

The claim is misleading; the video has circulated since 2013 in reports about an incident in California.

A reverse image search on Google using video keyframes extracted with InVID-WeVerify, a digital verification tool, found part of the video published in this July 1, 2013 report by the US television channel, NBC Los Angeles.

It reads, in part: "An officer shot and killed a Southern California man's dog after it jumped from an open car window and lunged at officers who were taking the Rottweiler's owner into custody on suspicion of interfering with a SWAT stand-off.

"The Hawthorne Police Department statement continued, "Fearing that the attacking Rottweiler would imminently bite the officer(s), one officer fired his duty weapon several times, striking and killing the dog."

The clip in the misleading Facebook video corresponds, in part, to the NBC Los Angeles video at the 17-second mark and the one-minute six-second mark.

Below is a screenshot comparison of the video in the misleading posts (L) and a frame in the NBC Los Angeles clip (R): 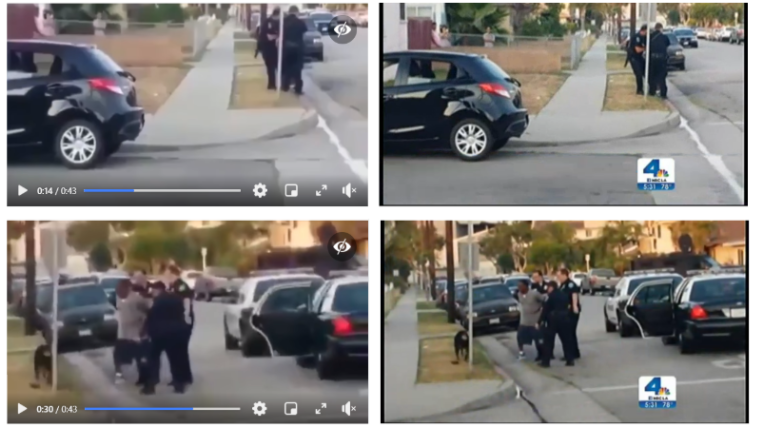 Claim :   Video of police officer shooting a dog is current.
Claimed By :  Social Media posts
Fact Check :  False
Black Lives Matter Black Lives Matter Protests Police brutality George Floyd protests George Floyd US Protests
If you value our work, we have an ask: Our journalists work with TruthSeekers like you to publish fact-checks, explainers, ground reports and media literacy content. Much of this work involves using investigative methods and forensic tools. Our work is resource-intensive, and we rely on our readers to fund our work. Support us so we can continue our work of decluttering the information landscape. BECOME A MEMBER
📧 Subscribe to our newsletter here. 📣You can also follow us on Twitter, Facebook, Instagram, Youtube, Linkedin and Google News