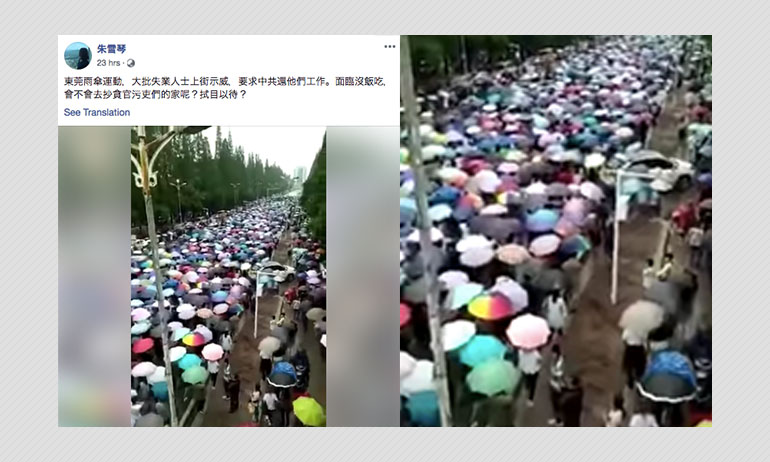 A video has been viewed tens of thousands of times in multiple posts on Facebook and Twitter July 2020 alongside a claim it shows a rally in the southern Chinese city of Dongguan inspired by the 2014 Umbrella Movement in Hong Kong. The video, however, has been shared in a misleading context; it has circulated online since at least June 2016 in news reports about a protest against a proposed pesticide plant in Hubei, a province in central China. Sporadic chants in Mandarin can be heard throughout the 36-second video: "Protect Qianjiang! Restore peace!"

The Facebook post's traditional Chinese-language caption translates to English as: "During the Dongguan Umbrella Movement, a large number of unemployed people took to the street, demanding the CCP to give them their jobs back. Will these people who are struggling to put bread on the table raid the homes of corrupt officials? Let's wait and see?"

The term "Umbrella Movement" refers to large pro-democracy protests which called for universal suffrage in Hong Kong in 2014, as reported here by AFP.

Some Facebook users appeared to be misled by the claim, as seen in comments on the post: "Liberate Dongguan??", "mainland China's Umbrella Movement!"; and "haha, if the laymen are out marching, they will start chanting slogans tomorrow and promote the downfall of the CCP the day after. After that, they will plot to kill the CCP (members)".

A screenshot taken on July 27, 2020, of a selection on comments on the misleading post

A frame-by-frame analysis of the video in the misleading post found a banner that translates as "pesticide factory" at the 19-second mark. 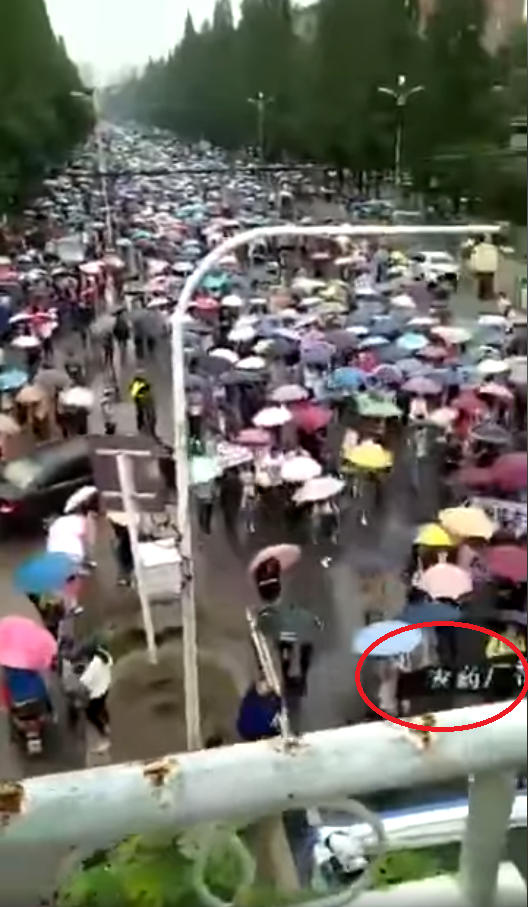 A screenshot, taken on July 27, 2020, of the video with the banner circled in red by AFP

A keyword search found a similar video published here on YouTube on June 27, 2016. The footage in the misleading post corresponds to the YouTube video between the 11-second and 22-second marks. The traditional Chinese-language caption of the YouTube video translates as: "Tens of thousands of angry people took to the street in Hubei, prompting the suspension of a proposed project for a pesticide factory in Qianjiang".

The protest site can be seen here in the Baidu Maps imagery of Qianjiang, a city in the central Chinese province of Hubei.

Similar scenes of demonstrators holding umbrellas were featured in reports by US broadcasters Radio Free Asia and New Tang Dynasty Television here and here in June 2016. The reports state that protesters were marching against a proposed pesticide plant in the city of Qianjiang.