Social media posts claim that the hepatitis B vaccine is dangerous for newborns, calling the ingredient aluminum toxic. This is false; health experts said the vaccine safely prevents the virus from infecting newborns, eliminating the risk of chronic disease, and confirmed that the amount of aluminum contained in the shot is less than what is ingested by a newborn from breastmilk or formula. 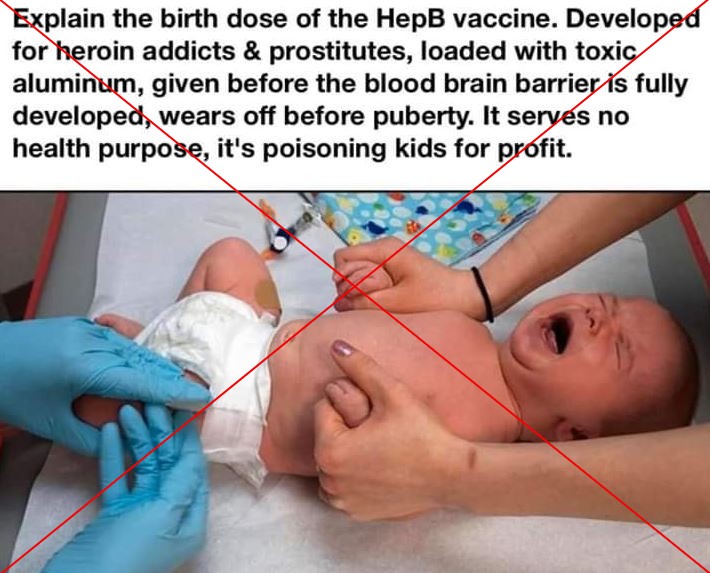 According to a search using the social media monitoring tool CrowdTangle, the post was first shared on a public Facebook page on June 8, 2019 and on Instagram three days later.

It has been shared more than 1,000 times in June 2020, including here and here, during a flurry of disinformation about immunizations as scientists around the world search for a COVID-19 vaccine.

A second version of the claim was shared by a user on both Facebook and Instagram in June 2020. It features a picture of a doctor speaking to a mother holding a newborn and says, "Your baby needs the hepatitis B vaccine in case he shoots up heroin with a prostitute." 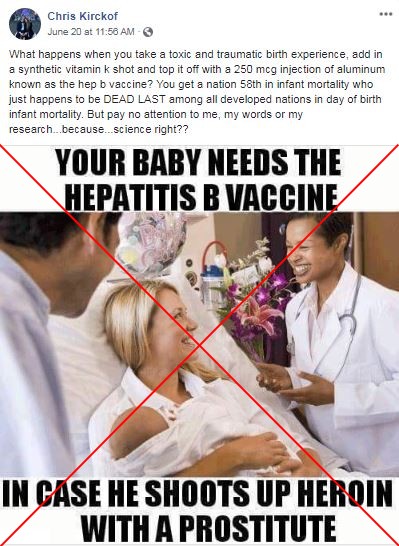 Screenshot of a CrowdTangle search taken on July 6, 2020

However, the posts raise unfounded fears about the hepatitis B vaccine, according to multiple doctors contacted by AFP.

The hepatitis B virus is highly contagious. One way it is transmitted is via sexual activity, so experts say there is a misconception that young children are not at risk. However, from the moment they are born, children risk hepatitis B transmission from an infected mother during birth, a relative at their home, or at school playing together with other children.

The World Health Organization (WHO) estimates that about 780,000 people die each year due to the consequences of hepatitis B, including liver cancer. There is no cure for the virus, but the vaccine can prevent infection.

Also Read: No, Drinking Cold Water Is Not Harmful For Human Health

Thomas I Michalak, Professor of Molecular Virology and Medicine at Memorial University in Newfoundland and Labrador, told AFP in an email: "Vaccination against hepatitis B is one the greatest achievements of humanity which saves lives of millions of people annually."

The WHO recommends that all infants should receive their first dose of vaccine as soon as possible after birth. It was added to the routine vaccination schedule for children in the US in 1991. The vaccination schedule in Canada varies greatly by province, but hepatitis B immunizations are recommended for all children.

Samuel So, founder of the multidisciplinary liver cancer program at the Stanford Cancer Center, explained that infant vaccination is key to the strategy to eliminate the virus.

Carla Coffin, Associate Professor of Medicine at the University of Calgary, agreed that the vaccine is key to preventing chronic infection.

"Infants or newborns exposed to the virus from their mothers at the time of birth or in early childhood are at very high risk of lifelong (chronic infection)," she explained in an email.

Aluminum is included in vaccines as an adjuvant, or ingredient to help the vaccine work better.

According to the US Centers for Disease Control and Prevention: "Aluminum salts, such as aluminum hydroxide, aluminum phosphate, and aluminum potassium sulfate, have been used safely in vaccines for more than 70 years."

Christopher Gill, Associate Professor of Global Health at the Boston University School of Public Health, said that the amount of aluminum in vaccines is not a danger to children.

"Aluminum adjuvants have been extensively studied and there is no evidence of harm," he said by email.

Gill explained that the amount of aluminum contained in vaccines is miniscule -- about 4 mg from all vaccines given in the first six months of life.

Vaccine ingredients are a regular target of disinformation. AFP Fact Check has investigated misleading posts about the use of thimerosal, potassium chloride and a misleading list of ingredients in the flu shot.

Claim Review :   Hepatitis B vaccine is dangerous for newborn babies.
Claimed By :  Posts on Facebook and Instagram
Fact Check :  False
COVID-19 COVID-19 Outbreak COVID-19 Pandemic Coronavirus Coronavirus Pandemic Coronavirus Outbreak Vaccines Vaccine Hepatitis B Vaccine Hepatitis B Hepatitis Fake News Fact Check Vaccination
If you value our work, we have an ask: Our journalists work with TruthSeekers like you to publish fact-checks, explainers, ground reports and media literacy content. Much of this work involves using investigative methods and forensic tools. Our work is resource-intensive, and we rely on our readers to fund our work. Support us so we can continue our work of decluttering the information landscape. BECOME A MEMBER
📧 Subscribe to our newsletter here. 📣You can also follow us on Twitter, Facebook, Instagram, Youtube, Linkedin and Google News