An image making the rounds on Facebook claims to show former US Secretary of State Hillary Clinton shaking hands with late al-Qaeda leader Osama bin Laden. This is false: AFP Fact Check found that the image has been doctored to add bin Laden, who was killed by US forces in 2011. The original version shows Clinton with Indian musician Shubhashish Mukherjee at an event in 2004.

The image, shared hundreds of times and archived here, shows Clinton shaking hands with bin Laden. The picture is marked with the text: "Remember this picture when you go to vote". It was shared on September 29, 2020 -- roughly five weeks before the US presidential election, which will see Republican President Donald Trump face off against Democrat Joe Biden. 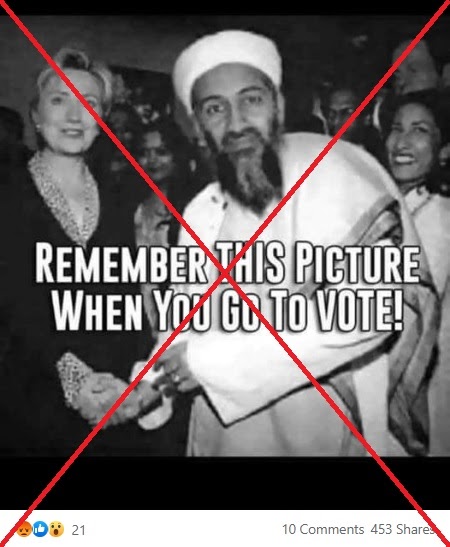 This is a doctored image for a Photoshop contest

AFP Fact Check found that this image first made the rounds before the 2016 US presidential election when Clinton was running against Trump. A simple reverse image search led us to multiple fact checks done before the 2016 election, including this one by Snopes.

We traced the image to a January 2007 Photoshop contest by a news-oriented Photoshop contest website called Freaking News. The original image shows Indian musician Shubhashish Mukherjee with Clinton at a dinner held in May 2004 at the annual dinner of the Asia Society Washington Center. His head was replaced with bin Laden's in the Photoshopped version. 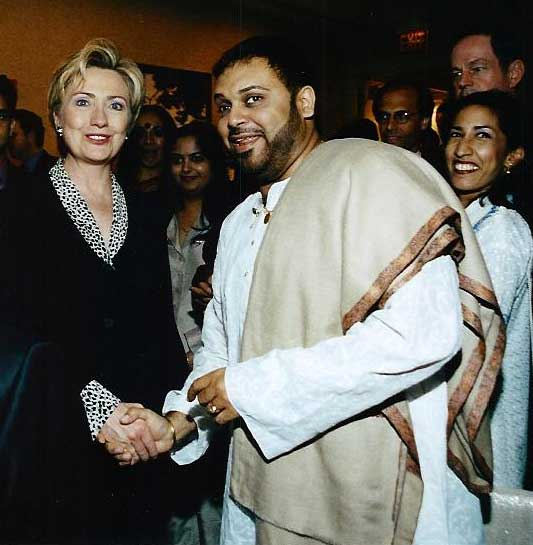 The original image before it was Photoshopped

When this picture was taken in 2004, Clinton was a member of the US senate.

US special forces killed bin Laden in Pakistan on May 2, 2011. At the time, Barack Obama was president and Clinton served as secretary of state.

The current US president recently retweeted a baseless conspiracy theory holding that Obama and Biden had staged bin Laden's killing and then killed the special forces involved in the operation to cover it up. Asked about this during a town hall meeting, Trump said, "That was a retweet, that was an opinion from somebody. I'll put it out there. People can decide."

Claim :   Hillary Clinton met Osama bin Laden.
Claimed By :  Social media posts
Fact Check :  False
US Elections 2020 Hillary Clinton Osama bin Laden USA Al Qaeda Bill Clinton Barack Obama Donald Trump Photoshop Joe Biden Kamala Harris Mike Pence US Elections 2020 US Elections 2020 US Presidential Elections US Presidential Elections American Elections Democrats Republicans
If you value our work, we have an ask: Our journalists work with TruthSeekers like you to publish fact-checks, explainers, ground reports and media literacy content. Much of this work involves using investigative methods and forensic tools. Our work is resource-intensive, and we rely on our readers to fund our work. Support us so we can continue our work of decluttering the information landscape. BECOME A MEMBER
📧 Subscribe to our newsletter here. 📣You can also follow us on Twitter, Facebook, Instagram, Youtube, Linkedin and Google News