Multiple claims on social media say that Zambia's army has enforced a 9:00 pm curfew and anyone disobeying the order risks going to military jail. The claim is false and such an order would require a special proclamation from the country's president.

A Facebook post shared more than 160 times and archived here warns people that the Zambian army is enforcing a 9:00 pm curfew.

An image that appears to show soldiers being transported on the back of military vehicles is included in the poorly written post. 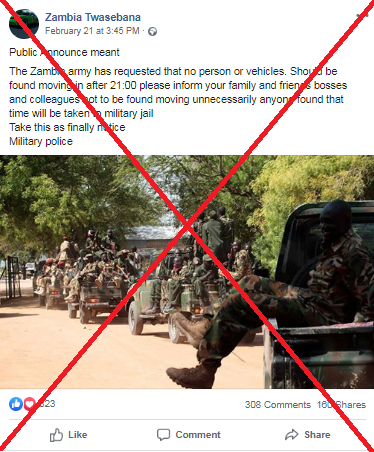 Those who ignore the curfew risk being taken to "military jail", according to the claim.

Variations of the claim appear here and here on Facebook. One of them states that the curfew is an attempt to "bring to an end the gassing of innocent people".

As reported by AFP, Zambia recently deployed soldiers in an attempt to suppress a wave of attacks on civilians by gangs using a special gas to immobilise their victims.

Multiple Facebook posts in Zambia have spread panic about the attacks. AFP Fact Check looked into how the misinformation started and debunked some of the claims. 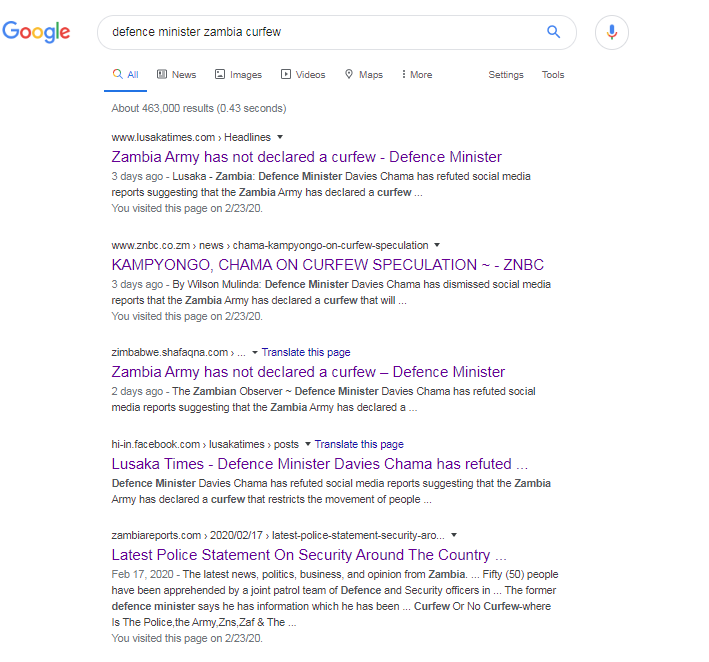 A screenshot taken on February 24, 2020 of the search results on Google.

Among them was a media report by Zambia's National Broadcasting Corporation (ZNBC), saying Zambian defence minister Davies Chama had refuted claims that the army had implemented a curfew restricting the movement of people after 9:00 pm.

ALSO READ: Was Snow Art In Support Of China Spotted in Wuhan

Media outlet Smart Eagles, which followed the minister as he and his home affairs counterpart Stephen Kampyongo visited townships in Lusaka, also reported in this post that Chama had dismissed claims of a curfew.

Chama reportedly said only President Edgar Lungu had the authority to declare a curfew.

A screenshot taken on February 26, 2020, from the section of Zambian legislation that allows the president to declare a curfew

Zambia police spokeswoman Esther Katongo denied the existence of a curfew. "No, it's not true," she responded on WhatsApp.

AFP's Zambia correspondent Obert Simwanza also confirmed the rumours were false, with people out and about after 9:00 pm.