A photograph shared hundreds of times on social media purports to show a Sudanese minister wearing a surgical mask to protect himself from the novel coronavirus during a meeting with a Chinese diplomat. However, the image has been Photoshopped.

The photograph has been shared in English, French and Arabic since it started circulating online in early February.

"Africans don't want to take chances with the Chinese. This is reportedly a Sudanese minister hosting a Chinese delegation," reads the caption on a tweet shared more than 200 times since February 8. 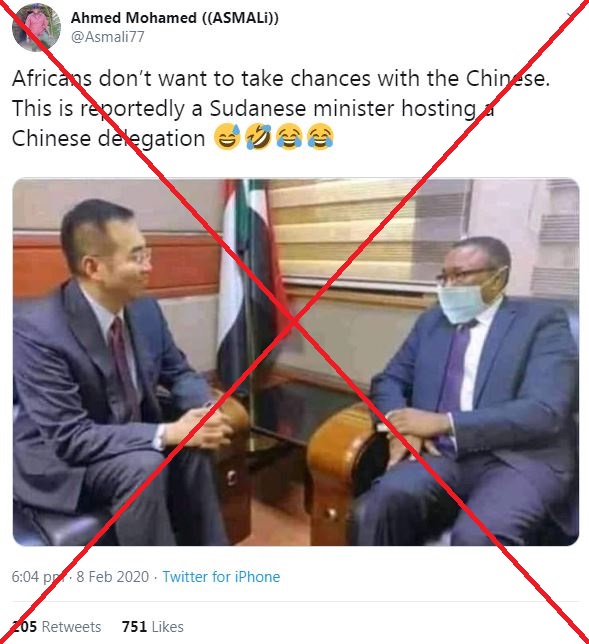 A screenshot of the photograph shared on Twitter, taken on February 17, 2020

"This is how the Sudanese minister welcomed the Chinese Ambassador at his office yesterday morning," claimed Botswana Trending News, which has more than 50,000 followers on Facebook.

AFP ran a reverse image search on Google, which revealed several articles in Arabic featuring the same photo but without the mask.

An article from news site Alrakoba said on February 3 that Sudan's foreign minister and China's ambassador to Sudan had met to discuss plans to evacuate Sudanese citizens in China. 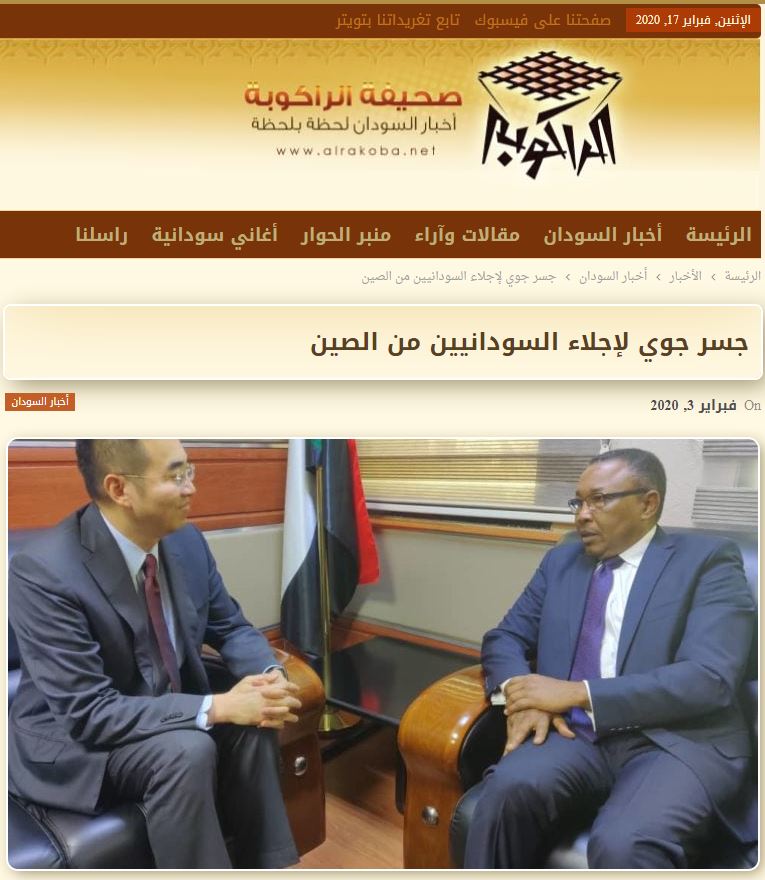 A screenshot of an article from news site Alrakoba, taken on February 17, 2020

Sudan's official SUNA news agency reported on February 3 that the country was planning to evacuate citizens from Wuhan, where the outbreak emerged late last year. A string of countries have already flown nationals home from the city, including the United States, Canada and Japan.

The virus has killed more than 1,800 people in China as of February 18, sparking panic buying, economic jitters and the cancellation of high-profile sporting and cultural events

AFP traced the photograph to the official Twitter account of Sudan's foreign office, where it was posted on February 3.

"The minister of state at the ministry of foreign affairs received the ambassador of the People's Republic of China," the caption reads.

The tweet links to an article on the ministry's website that confirms the men in the photograph are Sudan's state minister for the ministry of foreign affairs (whose name is Omar Qamar al-Din Ismail) and Ma Xinmin, China's ambassador to Sudan.

Egypt's health ministry announced the first case of the novel coronavirus in Africa on February 14. They did not specify the patient's nationality, but said they were not Egyptian.

Claim Review :   This Sudanese minister wore a mask to meet with a Chinese delegation
Claimed By :  Twitter
Fact Check :  False
FAKE NEWS Coronavirus outbreak FactCheck Sudanese Minister Photoshop Sudan China Coronavirus
If you value our work, we have an ask: Our journalists work with TruthSeekers like you to publish fact-checks, explainers, ground reports and media literacy content. Much of this work involves using investigative methods and forensic tools. Our work is resource-intensive, and we rely on our readers to fund our work. Support us so we can continue our work of decluttering the information landscape. BECOME A MEMBER
📧 Subscribe to our newsletter here. 📣You can also follow us on Twitter, Facebook, Instagram, Youtube, Linkedin and Google News