Multiple posts shared hundreds of times on Facebook claim that the world's first vaccine was developed under the Ottoman Empire, citing a letter written in 1717 by Lady Mary Montagu, wife of a British envoy in Constantinople. The claim is misleading; the first vaccine was introduced in 1796 by British physician Edward Jenner, according to multiple historical accounts; the medical procedure prior to that was known as "variolation" or "inoculation".

The misleading claim has been shared more than 550 times since it was posted on Facebook here on May 5, 2020.

The post's Indonesian-language caption reads in part:
"VACCINE
Vaccine was first made under the Ottoman caliphate. In 1717, Lady Mary Montagu, the wife of the British ambassador in Istanbul, wrote a letter to some of her friends telling them that in Istanbul there was something 'called vaccination' to treat people with smallpox in Istanbul.

"Lady Mary explained that women and children were gathered and then there was an incision on their arms. After that they were given something and they would experience a mild fever, and they became immune. This letter was the oldest document related to the production and use of vaccines. The letter was dated April 1, 1717."

ALSO READ: No, Flu Vaccines Do Not Make People Vulnerable To Infections

Lady Mary Wortley Montagu was an essayist and feminist, as well as the wife of Edward Wortley Montagu, who in 1716 was appointed as the British ambassador to Ottoman Empire, according to Encyclopaedia Britannica.

The same claim has been shared more than 180 times after it was posted on Facebook here, here, here and here.

The claim is misleading; the first vaccine was introduced in 1796 by British physician Edward Jenner, according to multiple historical accounts; the medical procedure prior to that was known as "variolation" or "inoculation".

The first small vaccine, created by Jenner in 1796 as an alternative to variolation, was the first successful vaccine to be developed, according to the World Health Organization here and the US National Library of Medicines here.

"The first vaccine was introduced by British physician Edward Jenner, who in 1796 used the cowpox virus (vaccinia) to confer protection against smallpox, a related virus, in humans," says Encyclopaedia Britannica here.

She sent the letter to her friend Sarah Chiswell in London, explaining a medical procedure in Ottoman Empire to treat smallpox.

AFP has highlighted part of the letter that mentions the procedure: 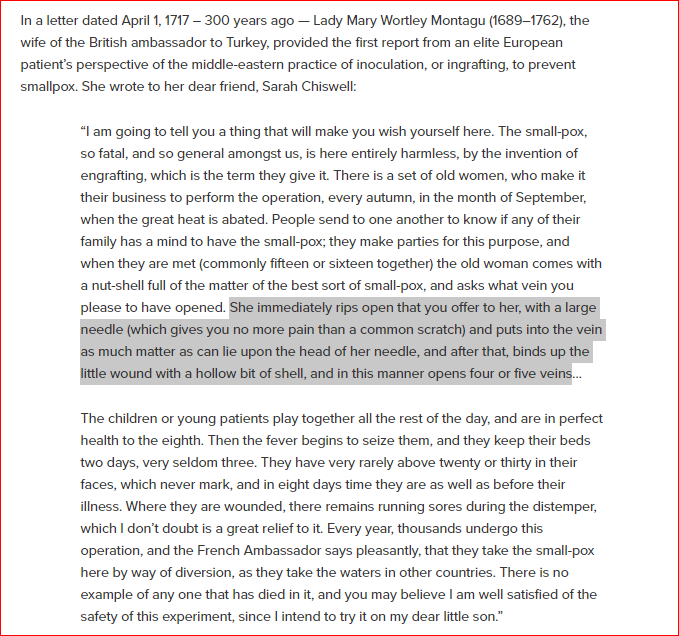 It says: "She immediately rips open that you offer to her with a large needle (which gives you no more pain than a common scratch) and puts into the vein as much venom as can lie upon the head of her needle, and after binds up the little wound with a hollow bit of shell, and in this manner opens four or five veins."

The procedure described by Lady Montagu in her letter was known as "variolation", according to this timeline on historyofvaccines.org, a website by the College of Physicians of Philadelphia.

According to the timeline, variolation, also known as "inoculation", was practiced in China, Africa and Ottoman Empire before spreading to Europe. Lady Montagu was credited to bringing the practice to England, where she had a physician variolate her daughter in 1721.

Variolation uses a mild form of smallpox taken from patients' pustules to create immunity against smallpox, according to Encyclopaedia Britannica here.

"Variolation was never risk-free. Not only could the patient die from the procedure but the mild form of the disease which the patient contracted could spread, causing an epidemic. Victims of variolation could be found at all levels of society; King George III lost a son to the procedure as did many others," the US National Library of Medicines explains here.

Claim :   The worlds first vaccine was developed under the Ottoman Empire.
Claimed By :  Facebook
Fact Check :  False
Coronavirus COVID-19 Coronavirus Vaccine COVID-19 Vaccine Ottoman Empire Vaccine Vaccination Edward Jenner
If you value our work, we have an ask: Our journalists work with TruthSeekers like you to publish fact-checks, explainers, ground reports and media literacy content. Much of this work involves using investigative methods and forensic tools. Our work is resource-intensive, and we rely on our readers to fund our work. Support us so we can continue our work of decluttering the information landscape. BECOME A MEMBER
📧 Subscribe to our newsletter here. 📣You can also follow us on Twitter, Facebook, Instagram, Youtube, Linkedin and Google News