A photo of a man ill in hospital has been shared hundreds of times in multiple Facebook posts alongside a video of a man eating a bat in a restaurant. The posts claim the man in the image was hospitalised after eating a bat following the outbreak of the novel coronavirus in the Chinese city of Wuhan. The photo and video have been shared in a misleading context; the photo has previously circulated in an online fundraising page for an Indonesian man hospitalised for a lung disease unrelated to the coronavirus epidemic; the video has circulated in separate reports about tourists sampling fruit bats in a restaurant on the island of Palau in Micronesia.

The video and photo were published alongside the claim here on Facebook on February 2, 2020. The post has been shared about 180 times.

The photo, which shows a hospitalised man with dark blemishes on his face, features text that reads: "The same person who demonstrated how to eat bats in video ended up in hospital...having his 'Dessert'".

The post's caption states: "The man in this video is now hospitalized." The novel coronavirus has killed more than 3,000 people and infected more than 88,000 others, mostly in mainland China, AFP reported on March 2.

The same photo and video were shared with a similar claim almost 600 times in other Facebook posts: in English here, in Chinese here and in Malay here.

The photo and video have been shared in a misleading context.

The photo has previously circulated in an online fundraising page for a man with a lung disease unrelated to the novel coronavirus epidemic.

A Google reverse image search found the photo was published on this fundraising page on Kitabisa, an Indonesia-based donation platform.

According to the page, the man in hospital is Aden Sugiantoro, a 28-year-old Indonesian national who underwent treatment at a hospital in Beijing for an acute lung condition.

Juliani Ferdyani, who set up the Kitabisa fundraiser, told AFP on February 26, 2020, that Sugiantoro suffered from a "final-stage lung disease" and was admitted to hospital on December 28, 2019. He died in January 2020, she said.

"It was after his death that the coronavirus information started to emerge," Ferdyani added.

Below is a screenshot comparison of the photo from the misleading post (L) and the photo on Kitabisa (R): 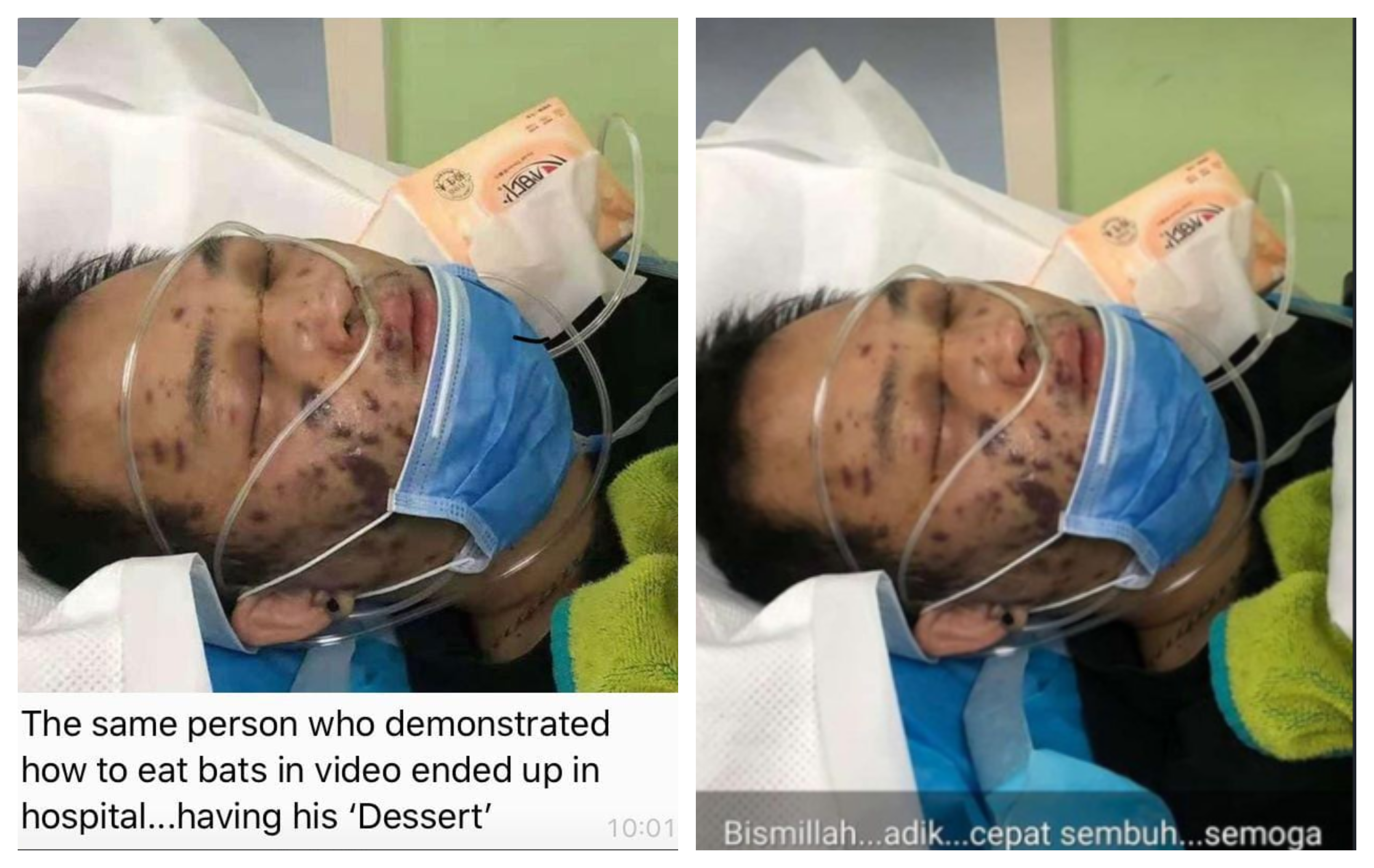 AFP conducted a keyword search on the Chinese online search engine Baidu and found the video of the man eating a bat was previously published here on Weibo on January 26, 2020.

Various blog posts have shared pictures of their experience at a restaurant in Palau here, here and here, where the same matching wall decorations and plates can be seen.

Below is a screenshot comparisons from the misleading video (L) and from bloggers' posts (R): Claim :   Man hospitalised after eating bat during Coronavirus epidemic.
Claimed By :  Social Media users
Fact Check :  False
man who demonstrated how to eat bats Bats Coronavirus China Coronavirus Coronavirus updates Coronavirus news novel Coronavirus Fake News Facebook Viral COVID-19 n-CoV Beijing Indonesia Micronesia Fundraising Donation platform
If you value our work, we have an ask: Our journalists work with TruthSeekers like you to publish fact-checks, explainers, ground reports and media literacy content. Much of this work involves using investigative methods and forensic tools. Our work is resource-intensive, and we rely on our readers to fund our work. Support us so we can continue our work of decluttering the information landscape. BECOME A MEMBER
📧 Subscribe to our newsletter here. 📣You can also follow us on Twitter, Facebook, Instagram, Youtube, Linkedin and Google News