The post was published to Facebook by a New Zealand-based user here on August 26, 2020. It has been shared more than 380 times. 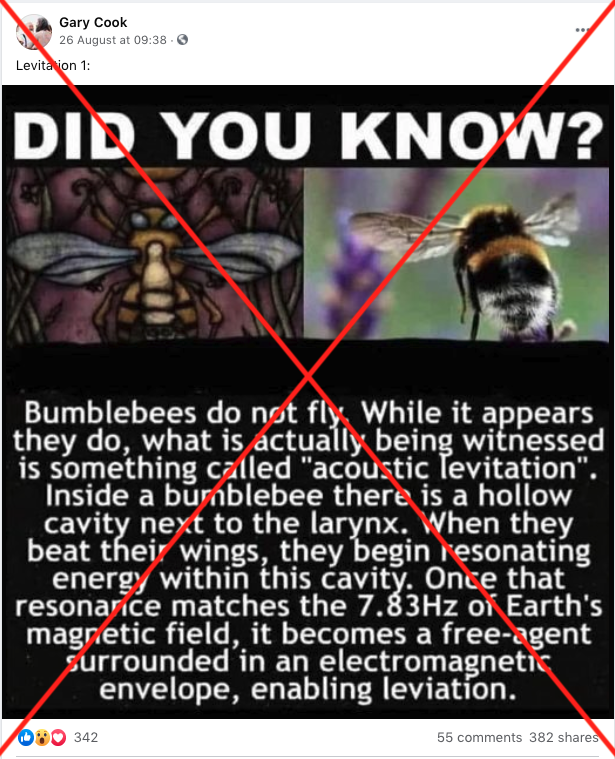 The images featured in the post show a photo of a bee and a drawing of a one.

Underneath the images is a caption that reads: "Bumblebees do not fly. While it appears they do, what is actually being witnessed is something called 'acoustic levitation'. Inside a bumblebee there is a hollow cavity next to the larynx. When they beat their wings, they begin resonating energy within this cavity. Once that resonance matches the 7.83Hz of Earth's magnetic field, it becomes a free-agent surrounded in an electromagnetic envelope, enabling levitation."

According to biologists at Arizona State University (ASU) in the US, bees can fly because their wings "make short, quick sweeping motions" that generate enough lift to propel them through the air -- not because of "acoustic levitation".

"Their wings are not rigid, but twist and rotate during flight. Bee wings make short, quick sweeping motions front and back. This motion creates enough lift to make it possible for bees to fly," the ASU article reads.

In 2005, scientists at the California University of Technology in the US determined that the movement of bees' wings creates an aerodynamic phenomenon called "leading edge vortices", which creates pressure differentials that allow certain animals to fly.

The researchers also found that the wingbeat frequency of bees is roughly 230Hz, or 230 cycles per minute. The determination is far greater than the 7.83Hz claimed in the false Facebook post.

"Our analysis of honeybee aerodynamics reveals how the rapid low-amplitude wing motion of bees is sufficient to maintain the weight of the animal," the study reads.

Also Read: Photo Shows A Swedish Warship And Not A Camouflaged Dutch Minesweeper

According to this article published by the US Department of Energy Argonne Laboratory, an "acoustic levitator" uses speakers to generate soundwaves that interfere with each other and create a standing wave.

"At certain points along a standing wave, known as nodes, there is no net transfer of energy at all. Because the acoustic pressure from the sound waves is sufficient to cancel the effect of gravity, light objects are able to levitate when placed at the nodes," the article reads.

A demonstration of acoustic levitation from the Argonne Laboratory can be seen here on its YouTube channel.