A video has been viewed tens of thousands of times in multiple posts on Facebook, Twitter and Youtube which claim it shows a plane in Melbourne, Australia carrying a shipment of medical supplies collected by the Chinese diaspora to be delivered to Guangzhou, China.

This video has been shared in a misleading context; it actually shows a plane in Nairobi, Kenya carrying aid for Guangzhou.The video was published here on Facebook on February 9, 2020. It has been viewed over 1,500 times.

The 15-second video shows a plane's cabin filled with boxes. It is overlaid with a popular Chinese patriotic song, "My Motherland and Me". Below is a screenshot of the misleading Facebook post: 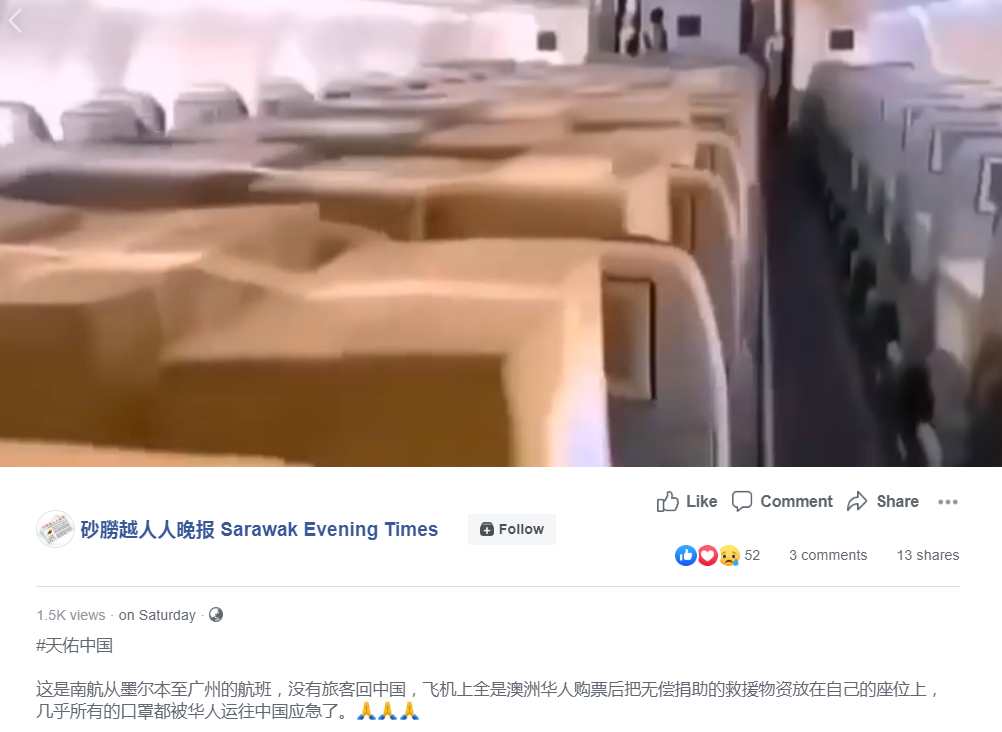 The post's simplified Chinese-language caption translates to English as: "#GodBlessChina / This is a China Southern Airlines flight from Melbourne to Guangzhou with no passengers. Chinese Australians bought the tickets and put all these relief materials they selflessly donated on their seats. Almost all the masks have been sent to China by Chinese people overseas for emergency."

The fight against novel coronavirus continues as China announced a dramatically spiked death toll of 1,355 on February 13, 2020. The total number of nationwide infections has risen to almost 60,000. Here is an AFP report on the ongoing epidemic.

It was also shared by the Chinese diplomat Zhao Lijian here on Twitter. Below is a screenshot of his tweet: 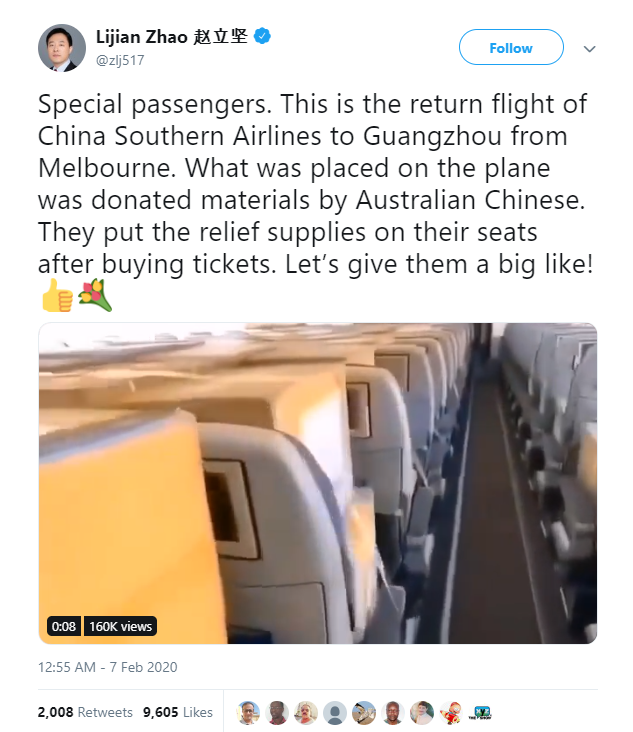 However, this video has been shared in a misleading context. It actually shows a China Southern Airlines plane in Nairobi carrying medical supplies collected by the Chinese diaspora and bound for Guangzhou. Passengers who bought tickets for this flight were upgraded by the airline to make space for the aid boxes in the cabin.

AFP found this higher quality version of the video, which shows two legible labels on some of the boxes, on the Weibo account of Beijing News.

The simplified Chinese label on one of the boxes seen at the eight-second mark of the video reads: "Jiangsu Province Overseas Chinese Charity Foundation". 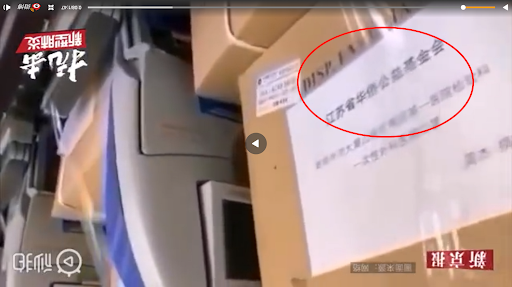 Screenshot of the video at the eight-second mark

Another box seen at the 11-second mark is labelled "Jiangsu Charity Federation". 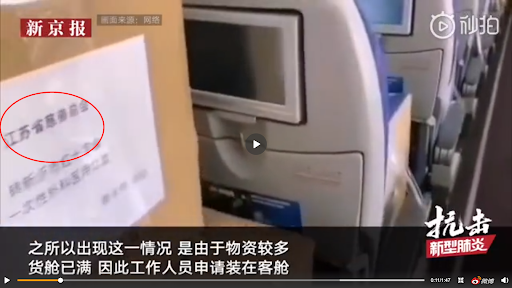 Screenshot of the video at the 11-second mark

The article reads, in part: "At the Jomo Kenyatta International Airport in Nairobi, Kenya, boxes of masks were neatly stacked in the cargo of China Southern Airlines flight CZ634 heading from Nairobi to Guangzhou. The Chinese community in Kenya fought hard to gather these protective materials for the mother country in the wake of the epidemic. The love is so great that even the cargo could not fit it all in.

"Regarding the situation, China Southern Airlines promptly and decisively launched an emergency plan, upgrading all passengers free of charge and freeing up the cabin area for the loveful materials from Chinese people in Kenya. Upon landing, Nanjing customs, Jiangsu Charity Federation and Jiangsu Province Overseas Chinese Charity Foundation provided the quickest and most efficient way for the transferring of the donation."

AFP also found this February 7, 2020 article published on the website of the Jiangsu Charity Federation, which mentions aid from Kenya.

The article states, in part: "In a race against time and disease, Jiangsu Charity Federation resolutely implemented President Xi's instruction of 'all donated materials shall be used for timely epidemic prevention and control'. 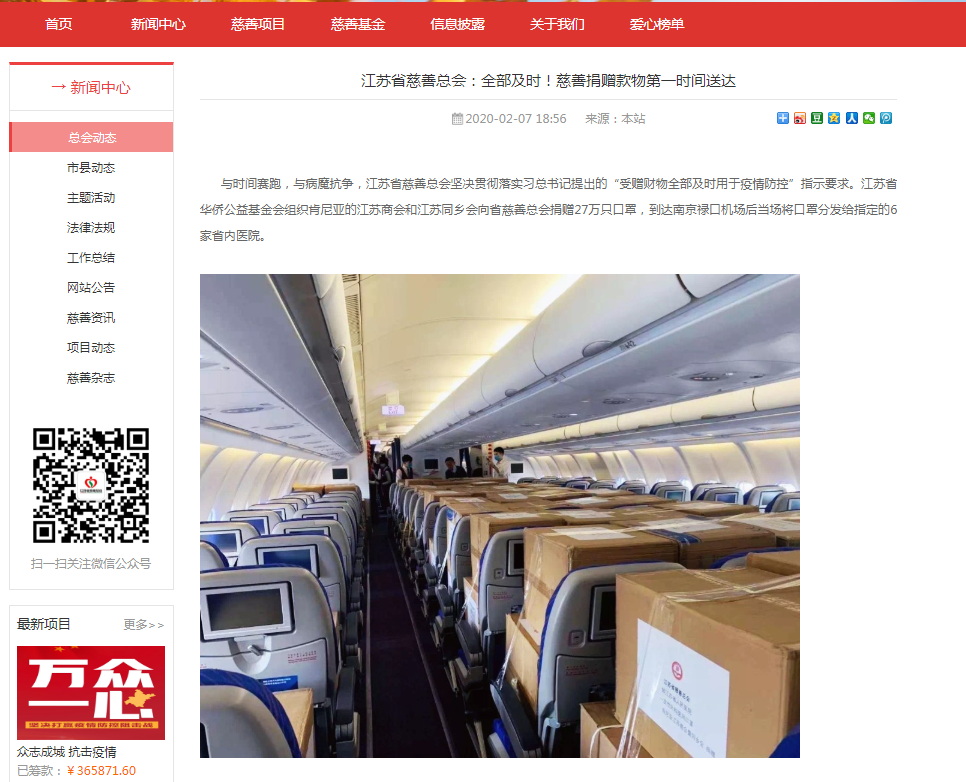 Claim :   Australia sent a flight with medical aid in wake of Coronavirus outbreak to Guangzhou, China.
Claimed By :  YouTube & Social Media videos and Chinese diplomat Zhao Lijian
Fact Check :  Misleading
Coronavirus Australia Australian Chinese releif materials China Coronavirus Coronavirus outbreak Zhao Lijian Fake News Viral video Kenya flight Melbourne Guangzhou Coronavirus
If you value our work, we have an ask: Our journalists work with TruthSeekers like you to publish fact-checks, explainers, ground reports and media literacy content. Much of this work involves using investigative methods and forensic tools. Our work is resource-intensive, and we rely on our readers to fund our work. Support us so we can continue our work of decluttering the information landscape. BECOME A MEMBER
📧 Subscribe to our newsletter here. 📣You can also follow us on Twitter, Facebook, Instagram, Youtube, Linkedin and Google News