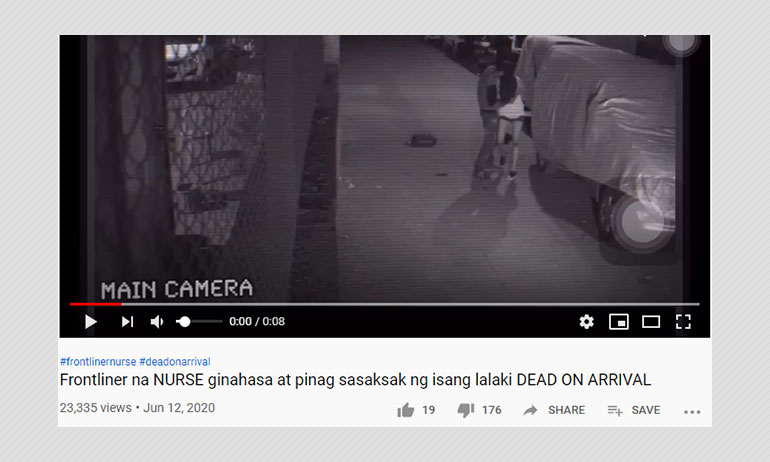 A video that appears to show a woman being attacked has been viewed tens of thousands of times in multiple YouTube posts and on various websites alongside a claim the footage shows a COVID-19 frontline nurse who was raped and stabbed to death. The claim is false; the footage was in fact taken from a sexual harassment awareness campaign video in India that circulated online years before the coronavirus pandemic. 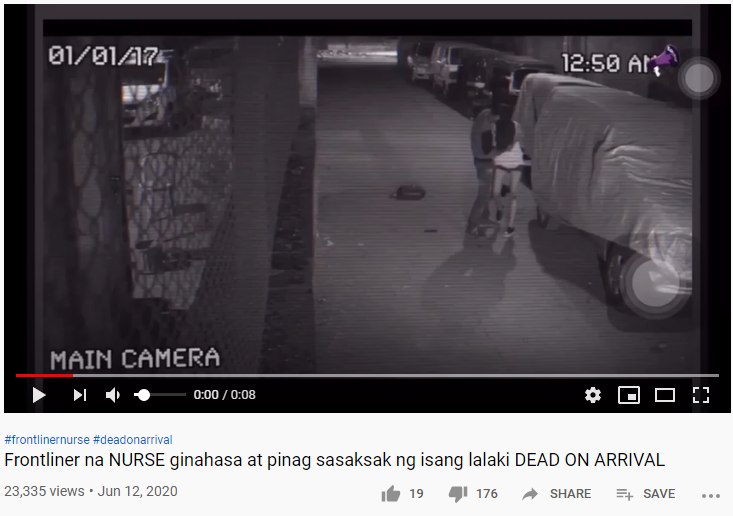 The post's Tagalog-language caption states: "Frontliner NURSE raped and repeatedly stabbed by a man DEAD ON ARRIVAL / #frontlinernurse #deadonarrival / A lot of evil people now despite the pandemic this man still raped and stabbed someone".

The video briefly shows footage of a man purportedly assaulting a woman before text appears on the screen that reads in part: "Condolences to the family".

Identical videos were also shared alongside a similar claim on YouTube here and on other websites here and here.

A reverse image search on Yandex using video keyframes extracted with InVID-WeVerify, an online verification tool, found the footage was taken from a scripted sexual harassment awareness campaign video that was published in 2017, years before the COVID-19 pandemic.

The original video was posted to YouTube here on March 17, 2017, by The Backchod, a channel "dedicated to producing entertaining and engaging videos."

The footage in the misleading posts corresponds to the 40-second mark to the 44-second mark in the original video. The Backchod video's caption reads in part: "The Backchod brings you a hard hitting video on and against molestation inspired by some real life events."

Below is a screenshot comparison of the video in the misleading posts (L) and the video uploaded by the The Backchod (R):

The Backchod also said its video is a simulation.

"This was a scripted video made for the social message on the molestation happening all over the world," the organisation told AFP in a Facebook message on June 18, 2020.