A video has been viewed tens of thousands of times in multiple posts on Facebook in June 2020 alongside a claim it shows that the US Embassy in Myanmar has issued a warning of possible attacks in three major cities in Myanmar. The claim is misleading; the video is a news report from September 2019.

The 53-second video shows a section of a news report by Myanmar National Television (MNTV) that features a screenshot of the purported security alert issued by the US Embassy. The video's voiceover states, in part: "The US Embassy in Yangon has announced a statement to be aware of security conditions in three major cities including Yangon because of the potential attacks." A screenshot taken on June 29, 2020, of the misleading posts by Daw Nant Khine Thazin Win

The Burmese-language caption of the post translates to English as: "Please be aware. Za. 16 6 2020".

The video has also been shared here, here, and here on Facebook, alongside a similar claim. 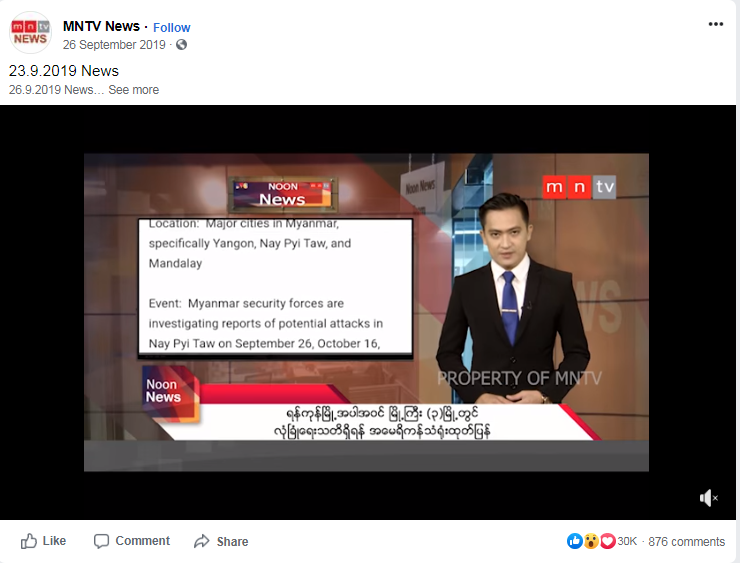 The title of the video reads: "26.9.2019 News / American embassy warmed to have security awareness in three cities including Yangon #mntv1pmnews".

Below is a screenshot comparison of the video in the misleading posts (L) and the MNTV video (R):

A further keyword search found the purported US Embassy statement here. The statement is dated September 25, 2019.

The release reads, in part: "Myanmar security forces are investigating reports of potential attacks in Nay Pyi Taw on September 26, October 16, and October 26, and in Nay Pyi Taw, Yangon, and Mandalay in the coming months."

The Myanmar Times reported on the warning message in an article published here in September 2019.

A search of the US embassy's website for updates on a security alert in June 2020 retrieved no results.

Claim :   The US Embassy in Myanmar has issued warnings of potential attacks in three Myanmarese cities.
Claimed By :  Facebook posts
Fact Check :  False
Myanmar Burma USA US US Embassy Myanmar National Television Nay Pyi Taw Fact Check
If you value our work, we have an ask: Our journalists work with TruthSeekers like you to publish fact-checks, explainers, ground reports and media literacy content. Much of this work involves using investigative methods and forensic tools. Our work is resource-intensive, and we rely on our readers to fund our work. Support us so we can continue our work of decluttering the information landscape. BECOME A MEMBER
📧 Subscribe to our newsletter here. 📣You can also follow us on Twitter, Facebook, Instagram, Youtube, Linkedin and Google News