Multiple posts shared hundreds of times on Facebook and Twitter claim that four Ukrainian soldiers died after participating in American COVID-19 vaccine trials in the northeastern Ukrainian city of Kharkiv. The claim, published in several languages across different posts, was attributed to a police spokesperson in the self-proclaimed Lugansk People's Republic. The claim is false; Ukraine military and Kharkiv medical officials said the posts were "fake news".

The claim was published here on July 27, 2020, on an Australia-based anti-vaccination Facebook page with thousands of followers. 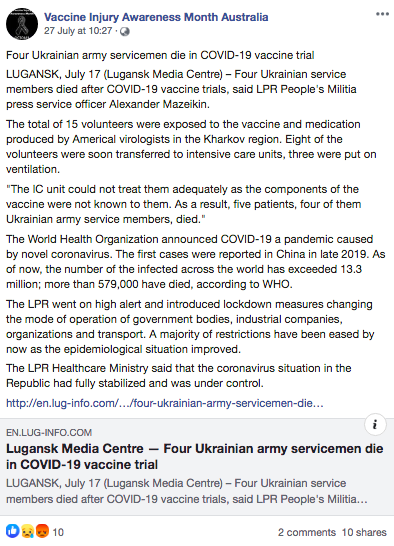 A screenshot taken on August 4, 2020, of the misleading claim

"A total of 15 volunteers were exposed to the vaccine and medication produced by American virologists in the Kharkov region."

Kharkiv is a city in northeastern Ukraine.

The post provided a link to this press release published by the Lugansk Media Centre on July 17, 2020. A Russian version of the release is available here.

Lugansk in eastern Ukraine is considered the capital of the Lugansk People's Republic (LPR), a proto-state established in 2014, as stated in this AFP report.

A similar claim also circulated online in other languages, including French, German and Russian here, here and here.

Ukrainian military and Kharkiv medical officials, however, have dismissed the claim as false.

In a telephone conversation with AFP, Ukraine military spokesperson Oleksiy Mazepa said: "There are no tests with our soldiers. This is obvious fake news. This is the way Russian propaganda works."

Sergey Shipilov, chief surgeon of Kharkiv Military Hospital, also told AFP by phone on July 29: "The whole story described in the article is one big fake news. All this is not true. There were no tests. This is complete fiction."

LPR police force spokesperson Alexander Mazeikin, who was quoted in the misleading claim, did not respond to AFP's request for comment at time of publication.

The false claim coincides with longstanding conspiracy theories circulating on Russian-language websites that a "secret laboratory" has been set up in Merefa, a city about 30km outside of Kharkiv.

This 2017 article published by pro-Russian broadcaster Tsargrad described the facility as a "secret death laboratory near Kharkiv", while this 2020 article alleged the "lab" was to be turned into an American military outpost where bioweapons and chemical weapons would be produced.

More than 150 researchers worldwide have been racing to develop and test a vaccine for the novel coronavirus, according to this July 22 report by AFP. Latest developments concerning the potential vaccines have been tracked by the World Health Organization (WHO) here.