Thousands of Facebook users in the United States are sharing 1-800 numbers that are supposed to help track stimulus payments promised by the federal government under a novel coronavirus economic aid package. The phone numbers, however, are not government hotlines but were instead first shared as April Fools' jokes, and greet callers with offers of phone sex.

A post with a simple black background first appeared on April 1, 2020 on a Facebook page called "My Crazy World of Memes," touting a 1-800 number to call to check on the status of stimulus payments being sent to American taxpayers. 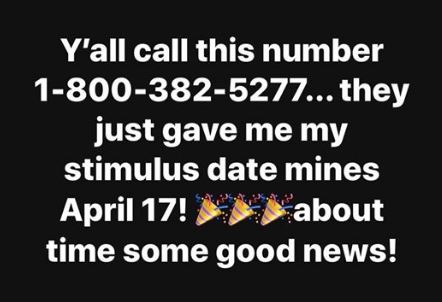 While the timing makes it fairly clear that the post was intended as an April Fools' prank, it spawned copycat versions that were not clearly shared as jokes.

"Stimulus payout status," claims one such post shared hundreds of times, including here, here and here, on Facebook since April 14. 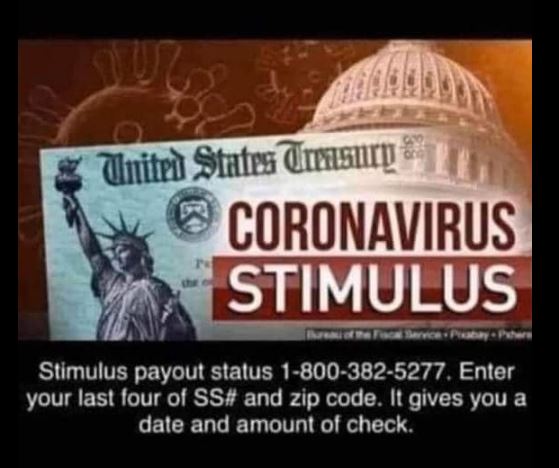 Screenshot of a Facebook post taken on April 16, 2020
ALSO READ: No, Muslims Are Not Praying On New York Streets During COVID-19

Similar posts with an alternate 1-800 number also originated on April 1, but have led to copycat posts on Facebook and Instagram. 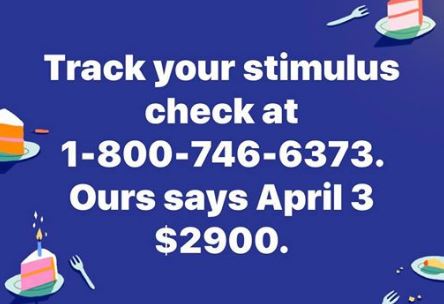 The toll-free numbers are not affiliated with the US government and actually answer with lewd offers of phone sex.

How to track a stimulus payment

On March 27, 2020, the US Congress passed the Coronavirus Aid, Relief, and Economic Security (CARES) Act and it was signed into law by President Donald Trump the same day.

The Internal Revenue Service (IRS) has established this website with verified information for people with questions about their eligibility for the payments.

IRS phone assistance lines are closed because of the coronavirus.

Americans can also use this free "Get My Payment" app to check on the status of their payment or to supply additional information to the IRS to allow for direct deposit of the funds to a designated bank account.