A series of photos shared tens of thousands of times claims that mobile testing facilities for COVID-19 carry a depiction of the Egyptian "god of death" Anubis as their logo. This is false; the logo features an aardvark according to the company that runs the testing facilities.

The post, shared more than 25,000 times in the United States and more than 3,000 times in Canada in the last week, shows pictures of a COVID-19 mobile testing booth often accompanied by the question, "Why does the COVID-19 testing facility have a logo of Anubis the god of death?"

A separate depiction of Anubis, the jackal-like Egyptian "deity of cemeteries, embalming and protector of graves," is shared alongside it. 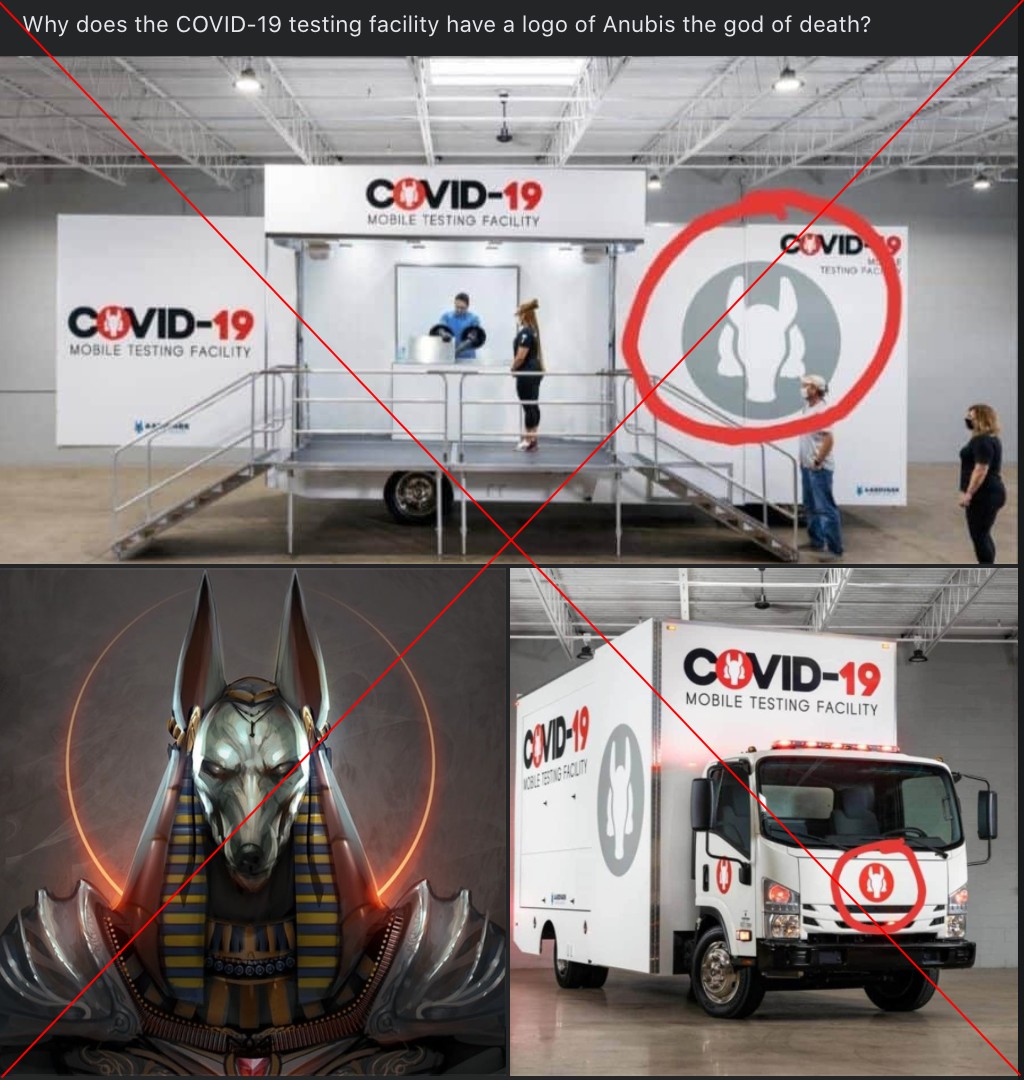 A reverse image search of the testing facility photograph on Google found this tweet by a company called Aardvark Mobile Tours, which offers vehicle-based marketing solutions.

According to their website, Aardvark, based in Conshohocken, Pennsylvania, adapted their mobile platform business in response to the coronavirus pandemic by designing two trucks as mobile testing centers.

The trucks were featured in the Miami Herald and were photographed in Florida by AFP's Chandan Khanna on July 24, 2020.

"The logo for Aardvark Mobile Tours was created in 2007 and includes the Aardvark head – which is what you see in the COVID-19 testing logo," she added.

The company also says it does not attach any symbolism to the logo of the aardvark, a long-snouted nocturnal creature native to Africa.

"Larry Borden, the founder and CEO, actually chose the name 'Aardvark' originally because of the double 'A' at the beginning, meaning the company would show up at the beginning of the phone book," said the spokeswoman.

AFP Fact Check has debunked more than 570 examples of false or misleading information about the novel coronavirus. You can find the complete list of our fact checks on the topic in English here.

Claim :   The logo of a COVID-19 testing facility depicts Anubis, the Egyptian God of Death.
Claimed By :  Facebook posts
Fact Check :  False
COVID-19 Testing COVID-19 Aadvark Anubis Egyptian God of Death COVID-19 Anubis COVID-19 Aadvark COVID-19 Outbreak COVID-19 Pandemic Coronavirus Coronavirus Pandemic Coronavirus Outbreak COVID-19 Vaccine COVID-19 Cure Coronavirus Cure Coronavirus Vaccine
If you value our work, we have an ask: Our journalists work with TruthSeekers like you to publish fact-checks, explainers, ground reports and media literacy content. Much of this work involves using investigative methods and forensic tools. Our work is resource-intensive, and we rely on our readers to fund our work. Support us so we can continue our work of decluttering the information landscape. BECOME A MEMBER
📧 Subscribe to our newsletter here. 📣You can also follow us on Twitter, Facebook, Instagram, Youtube, Linkedin and Google News