A post shared thousands of times on Facebook lists companies whose chief executive officers have allegedly stepped down during the novel coronavirus crisis. This is misleading; some of the 19 CEOs remain in their positions, while the announcements that others were leaving came before the virus emerged in late 2019.

"While you're being distracted by the COVID-19 news," the post says before listing the companies whose CEOs it claims have departed and asking: "What's really going on?" 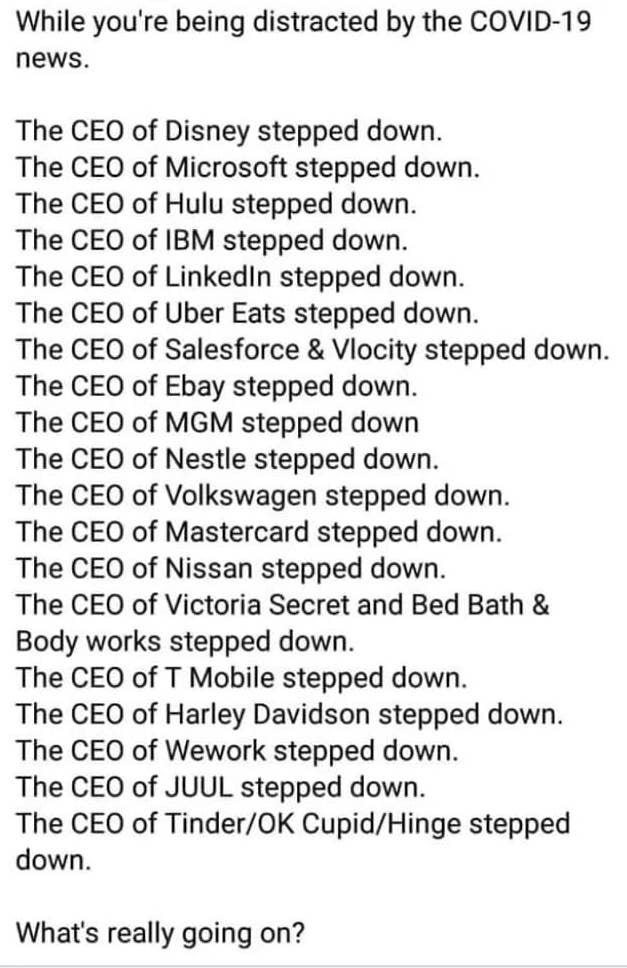 ALSO READ: No, Bill Gates Has Not Called The Coronavirus A 'Great Corrector'

Several of the major companies on the list did announce changes at the top in 2020, including Disney, Mastercard and IBM.

But for others -- such as eBay, Juul and T-Mobile -- the transition was decided on or made before the novel coronavirus outbreak, and the CEOs of some firms on the list, such as Nestle and Volkswagen, have not recently changed.

The US economy has been heavily impacted by the novel coronavirus crisis, which has left more than 75,000 people dead worldwide.

A staggering 10 million American workers filed for unemployment benefits in the second half of March as measures aimed at countering the novel coronavirus forced stores and businesses nationwide to close their doors.

On February 25, the Walt Disney Company announced that Bob Chapek would take over as CEO from Bob Iger.

In 2019, Iger had talked about officially retiring at the end of his 2021 contract. He had been CEO of Disney since 2005, and is to remain executive chairman of the company through 2021.

Satya Nadella has been Microsoft's CEO since 2014 and remains in that role.

On January 31, Hulu announced that its CEO Randy Freer was stepping down. The news came as Disney is merging the company's operations with its own streaming business. In 2019, Disney reached an agreement to take "full operational control" of the company.

IBM announced on January 30 that Arvind Krishna would replace Virginia Rometty as CEO of the company, effective April 6. Rometty remains executive chairman of the board until the end of the year, "when she will retire after almost 40 years with the company."

On February 5, LinkedIn announced the appointment of its next CEO, Ryan Roslansky, effective June 1.

A transition had been on the table since the summer of 2019, according to Jeff Weiner, the company's current CEO, who will move into the role of executive chairman.

Jason Droeger, the head of the food delivery division of Uber, announced his decision to step down on February 25. Droeger had led Uber Eats since its launch in 2015.

Keith Block, co-CEO of Salesforce, announced on February 25 that he was stepping down, leaving Marc Benioff as Chair and CEO of the cloud computing service company.

The same day, Salesforce entered into an agreement to buy Vlocity.

In September 2019, eBay's former CEO Devin Wenig stepped down amid disagreement with the company's new board. The company's finance chief, Scott Schenkel, took over as interim CEO.

MGM Resorts International announced on February 12 that its CEO Jim Murren was leaving the company before the end of his contract.

On March 22, the company said an interim replacement for Murren had been named.

Mark Schneider is the CEO of Nestle and has been since 2017. In a recent message to his employees, Schneider addressed the challenges of the novel coronavirus crisis.

Herbert Diess has been the CEO of Volkswagen since 2018 and remains in that role.

Mastercard announced on February 25 that its CEO Ajay Banga would step down as of the start of 2021, to be replaced by the Chief Product Officer Michael Miebach.

Makoto Uchida took over as CEO of Nissan in December 2019, in the aftermath of the arrest of former boss Carlos Ghosn on financial misconduct charges that he denies. Ghosn subsequently fled to Lebanon.

Victoria's Secret and Bed Bath & Beyond

L Brands, the group that owns Victoria Secret and Bed Bath & Beyond, said on February 28, 2020 that its CEO Leslie Wexner was stepping down.

On November 18, 2019, T-Mobile announced its CEO John Legere would be replaced by the current chief operating officer of the company, Mike Sievert, as of April 30, 2020.

Harley-Davidson announced on February 28 that its CEO Matthew Levatich had stepped down, naming board member Jochen Zeitz as his successor.

The controversial co-founder of WeWork, Adam Neumann, said in September 2019 that he was stepping down as the startup faced questions over its governance and profit outlook. The embattled firm announced the hiring of a new CEO in early February 2020.

In September 2019, Juul CEO Kevin Burns announced his decision to step down. The same day, K.C. Crosthwaite was appointed as Juul's new CEO.

On January 28, 2020, Match Group, owner of the dating apps Tinder, OkCupid and Hinge, announced its CEO Mandy Ginsberg was stepping down and leaving the company.

Claim :   CEOs of companies like Disney, Microsoft, IBM, Uber, LinkedIn have resigned due to the COVID-19 pandemic.
Claimed By :  Unknown
Fact Check :  Misleading
COVID-19 economic crisis COVID-19 COVID-19 Crisis Coronavirus Coronavirus Crisis Coronavirus Economic Crisis FactCheck Misleading
If you value our work, we have an ask: Our journalists work with TruthSeekers like you to publish fact-checks, explainers, ground reports and media literacy content. Much of this work involves using investigative methods and forensic tools. Our work is resource-intensive, and we rely on our readers to fund our work. Support us so we can continue our work of decluttering the information landscape. BECOME A MEMBER
📧 Subscribe to our newsletter here. 📣You can also follow us on Twitter, Facebook, Instagram, Youtube, Linkedin and Google News