An "open letter" purportedly written by US billionaire and philanthropist Bill Gates about the novel coronavirus pandemic has been shared in English and Chinese on Facebook, Twitter and various websites. The Chinese-language posts state the letter was translated from its original publication in the British newspaper The Sun. But the letter is fake; Gates' philanthropic organisation, the Bill & Melinda Gates Foundation, clarified on Weibo that the letter presents "false information" and urged netizens to stop sharing it. The Sun has reportedly removed the letter from its website. The letter, written in simplified Chinese, was published on Facebook here on March 25, 2020.

Translated to English, the Facebook post begins: "An open letter from Bill Gates was published by British newspaper The Sun today and has since attracted a lot of attention. The letter has been shared widely by netizens who praise Gates' wisdom. It has been translated swiftly into Chinese. Here is Gates' letter."

The 14-part letter states the novel coronavirus pandemic has reminded humans about our equality, inter-connectedness and limited longevity, as well as the importance of health and family; and that the storm will pass but what remains is the fact that the Earth is ill.

The author ended the letter by concluding that the pandemic is not a disaster, but a "great corrector".

The post also included a screenshot of a WeChat article titled "Bill Gates: Novel coronavirus is a 'great corrector'", which was published on an account called Mengyue Marriage School. 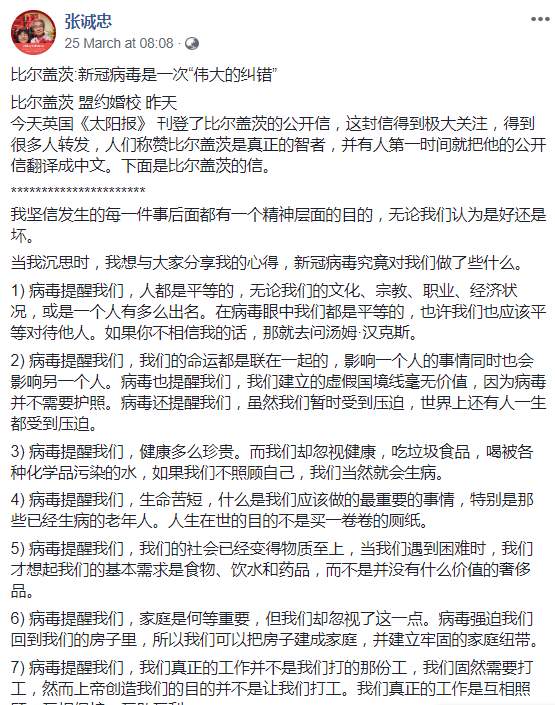 The novel coronavirus has killed at least 72,000 people and infected more than 1.2 million others worldwide as of April 7, according to the World Health Organisation.

But the letter is fake.

The Bill & Melinda Gates Foundation clarified on its verified Weibo account here on March 24, 2020, that the letter was not written by Gates.

"Recently an article credited to Bill Gates with the title 'What we can learn from the novel coronavirus epidemic' has circulated online after being translated from a report published on the website of British newspaper The Sun. It has been confirmed that the article presents false information and has been removed from The Sun's website. Please stop sharing the article. Thank you!" The statement reads.

Below is a screenshot of the Weibo post from Gates Foundation:

The Sun has reportedly apologised and removed the erroneous letter from its website. A spokesperson for The Sun told British newspaper The Independent that it "mistakenly published a spoof story".

The Sun has not replied to enquiries from AFP at the time of publication.