A photo purportedly showing a well-stocked vegan food shelf while other food items are cleared out amid a round of panic buying during the novel coronavirus epidemic has been shared thousands of times on Facebook and Twitter. This is false; this photo has circulated online since September 2017 in reports about panic buying after Hurricane Harvey made landfall in the US.

The photo, published here on March 4, has been shared more than 6,000 times after being posted to an Australia-based Facebook group with more than 180,000 followers.

The caption superimposed above the image states: "Even with the Corona Virus panic buying, no one wants to eat Vegan food."

Panic-buying has been reported across the globe in the US, Europe, Australia and Asia during the novel coronavirus epidemic, which has killed more than 7,000 people and infected over 180,000 others worldwide, AFP reported here and here.

The claim also appeared in other languages, such as here in Dutch and here in Turkish.

The claim is false; the photo has circulated online since at least September 2017 in a post about panic buying Houston, a major city in the US state of Texas, ahead of a hurricane.

A reverse Google image search found that the photo was published on September 2, 2017 in this tweet by American comedian Matt Oswalt.

The caption of the photo reads: "'You have a choice Houston, starve to death...or eat vegan.' (ENTIRE CITY OF HOUSTON TAKES A BIG SWIG OF WHISKY)'I'll see you in hell.'"

Products from US vegan brands such as Chao and Lightlife can be seen on the top two shelves in the photograph, as circled by AFP in the screenshot below: 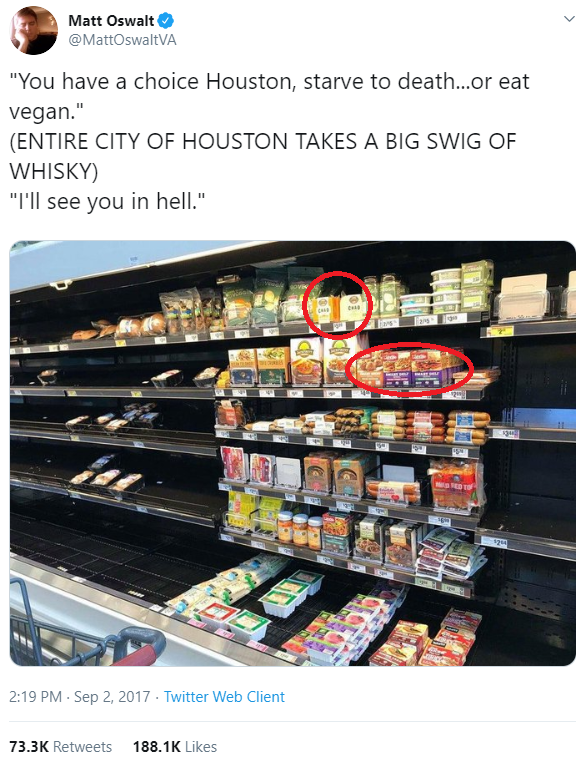 In an earlier post on August 31, 2017, Oswalt also tweeted about Hurricane Harvey, which first hit southeast Texas on August 25 that year.

Empty shelves were reported in supermarkets across the US south, including in Houston and San Antonio, Texas and Florida.