A video has been viewed hundreds of thousands of times in posts on Facebook, YouTube, Douyin and Weibo purporting to show a detector dog after it was assaulted during a security check amid the ongoing COVID-19 pandemic. The video has been shared in a misleading context; it has circulated online since December 2018, at least a year before the novel coronavirus was first reported in the Chinese city of Wuhan.

The video was published here on Facebook on April 7, 2020. It has been viewed more than 350 times.

The 17-second footage shows a black dog wearing a "quarantine detector dog" badge being held in the arms of a woman in uniform.

"The use of Quarantine Detector Dogs has been shown to be an effective, internationally recognised tool for detecting and combating the smuggling of quarantine items," according to Hong Kong's Agriculture, Fisheries and Conservation Department. 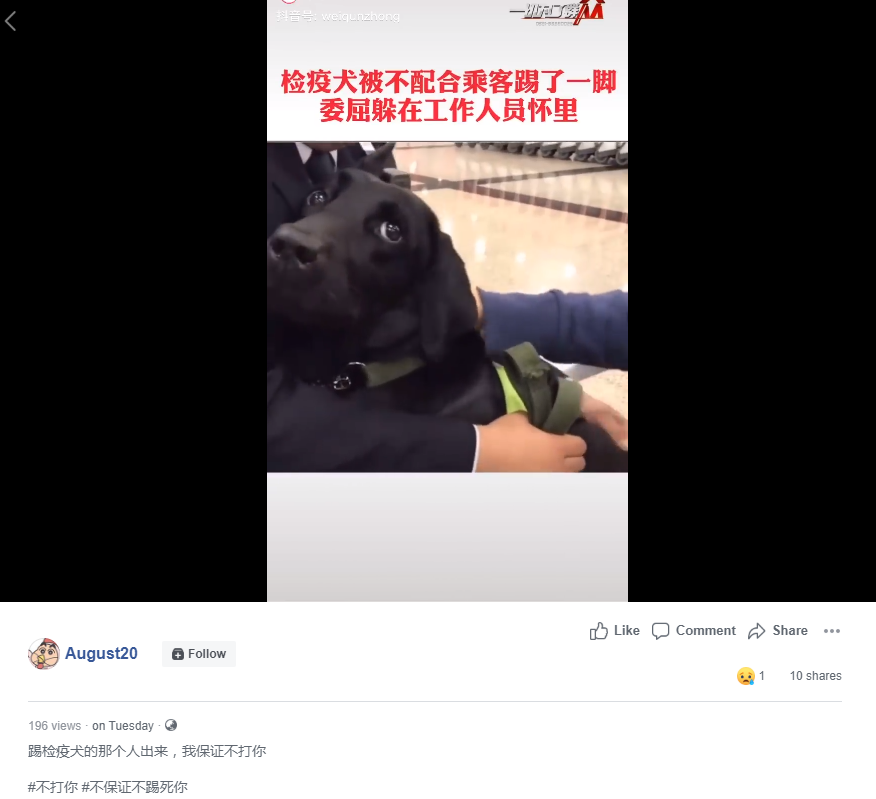 The video is overlaid with a popular Chinese song, and a conversation in Mandarin can be heard throughout. The conversation, transcribed in yellow in simplified Chinese characters on screen, can be translated to English as: "(The dog) looks like a husky", "It's fine, don't be afraid", "Looks frightened", "It's scared".

The red text superimposed at the top of the video translates to English as: "The quarantine detector dog working during the pandemic was kicked by an uncooperative passenger. It felt wronged and hid in the arms of the staff for comfort".

The clip also features the logo for Douyin, the Chinese version of video-sharing app TikTok, as well as a watermark of a Douyin channel called "Everything for the masses".

The channel is affiliated with a programme on Shandong Radio and Television, a broadcaster based in the eastern Chinese province of Shandong.

The caption of the misleading Facebook post states: "Show your face, the person who kicked the quarantine detector dog working during the pandemic, promise I won't hit you / #WontHitYou #NeverPromisedNottoKickYouDead".

In some parts of the world, dogs are being trained to "sniff out" COVID-19. According to this March 27 AFP report: "A British charity has teamed up with scientists to see whether dogs could help detect COVID-19 through their keen sense of smell, they said on Friday... It follows previous research into dogs' ability to sniff out malaria and is based on a belief that each disease triggers a distinct odour."

The video has been shared extensively amid the COVID-19 crisis, which has, as of April 14, 2020, caused at least 111,000 deaths and infected more than 1.7 million others worldwide, according to the latest World Health Organization (WHO) data.

However, the video first appeared online at least a year before the novel coronavirus outbreak and has been shared in a misleading context.

A Google reverse image search of keyframes extracted from the video found an identical video published on the Chinese video platform Ixigua on December 30, 2018.

The video's simplified-Chinese caption translates to English as: "Detector dog fled right after it saw me. What's going on? (Am I) that scary?"

Below is a screenshot comparison of keyframes from the video in the misleading posts (L) and the Ixigua video (R): 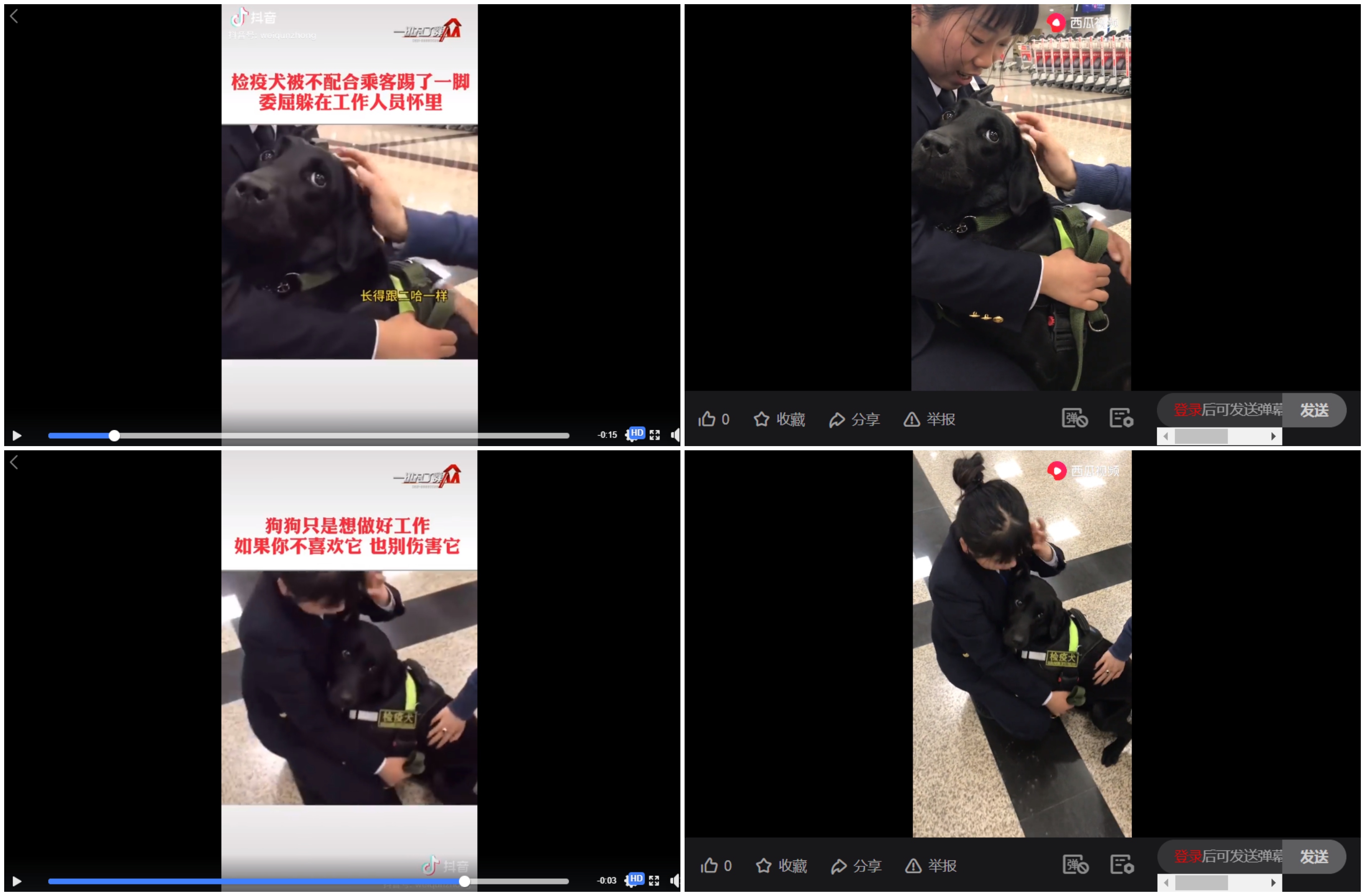 A keyword search found the identical video published again on Ixigua here and on the Chinese video platform Tencent Video here in early 2019 alongside a similar claim.

Claim :   A quarantine detector dog working during the COVID-19 pandemic was kicked by an uncooperative passenger. The dog fled to a staff member who comforted the animal.
Claimed By :  Social Media users
Fact Check :  False
quarantine detector dog Quaratine dogs Coronavirus news Coronavirus fake news Coronavirus viral video Coronavirus pandemic China Coronavirus FactCheck Old Video dog video Video FactCheck
If you value our work, we have an ask: Our journalists work with TruthSeekers like you to publish fact-checks, explainers, ground reports and media literacy content. Much of this work involves using investigative methods and forensic tools. Our work is resource-intensive, and we rely on our readers to fund our work. Support us so we can continue our work of decluttering the information landscape. BECOME A MEMBER
📧 Subscribe to our newsletter here. 📣You can also follow us on Twitter, Facebook, Instagram, Youtube, Linkedin and Google News