A photo of Hollywood actor Tom Hanks holding a volleyball has been viewed thousands of times in multiple Facebook, Twitter and Instagram posts alongside it shows him in quarantine at a hospital in Australia after contracting the novel coronavirus, COVID-19. The posts further claim hospital staff gifted Hanks the ball as a tribute to his character Chuck Noland in the 2000 film 'Cast Away', who "befriends" a volleyball. The claim is false; the image has been doctored using a 2015 photograph of Hanks and a stock photo of a hospital ward; the doctored photo emerged on a satirical website.

This photo was published on Twitter on March 12. It was been retweeted more than 1,300 times.

ALSO READ: Is This How The Coronavirus Looks Magnified 2,600 Times? A FactCheck

The caption states: "Tom Hanks has #Coronavirus He also has a cracking sense of humour. Gold Coast Hospital Staff Roll In A Volleyball To Keep Tom Hanks Company In Quarantine."

Hollywood star Tom Hanks and his wife Rita Wilson were being treated at the Gold Coast University Hospital after they were diagnosed with the new coronavirus in Australia, AFP reported here on March 12. 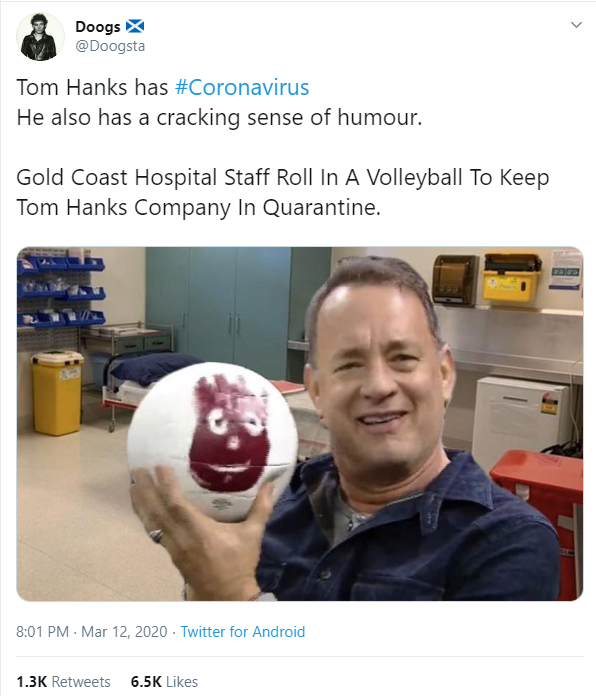 The claim is false; the composite image was created using a 2015 photo of Tom Hanks and a separate one of a hospital ward.

A reverse image search on Google using the part of the photo that shows Hanks found this video posted on the official Instagram account of ice hockey team New York Rangers on February 6, 2015.

In the footage, Hanks waves at the camera before receiving a volleyball identical to the ball which Hanks' character "befriends" and names Wilson in the 2000 movie Cast Away.

Below is a screenshot comparison of the photo in the misleading posts (L) and a keyframe extracted from the New York Rangers video (R):

ALSO READ: Viral Coronavirus 'Advisory' Is Not From UNICEF

Below is a screenshot comparison of the photo in the misleading posts (L) and the EPA photo (R) with corresponding features circled in red by AFP:

The misleading claim was also debunked by BuzzFeed News, Mashable and Snopes.