A video has been viewed tens of thousands of times in multiple Facebook, Instagram and YouTube posts which claim it shows people in China toppling a 5G tower because of fears that they cause the novel coronavirus. The claim is false; the video shows pro-democracy protesters toppling a smart lamppost in Hong Kong in August 2019, several months before the novel coronavirus outbreak.

The 26-second video has been shared more than 28,000 times after being posted here on Facebook on March 29.

The post's caption states: "Chinese people destroying 5g towers. Thinking that this is the cause of the virus". 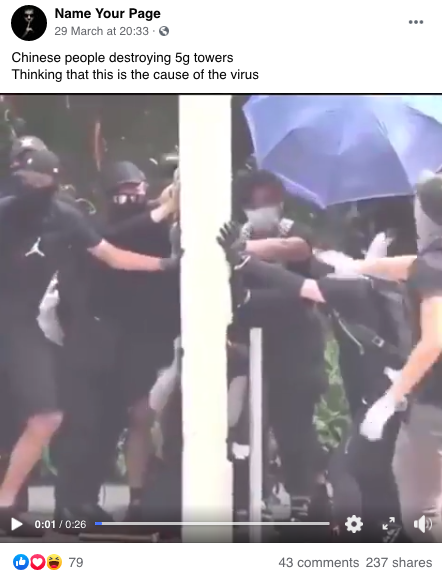 The footage circulated online as the world attempted to slow down the spread of the novel coronavirus, which has killed more than 62,784 people and infected more than 1.1 million others worldwide, according to this World Health Organization (WHO) report on April 5.

The claim is false; the video was filmed during the Hong Kong protest in August 2019, months before the novel coronavirus was first reported in the Chinese city of Wuhan in December 2019.

A reverse image search on Google found the same video published here on YouTube in August 2019 alongside the caption: "Protestors in Hong Kong are cutting down facial recognition towers [24.08.2019]".

A similar scene was captured by Hong Kong newspaper Apple Daily in this video published on Facebook on the same day.

The traditional Chinese-language caption translates to English as: "A smart lamppost toppled by protesters".

Below is a screenshot comparison between the video in the misleading posts (L) and the Apple Daily video (R):

The video was filmed outside the MegaBox shopping centre in Hong Kong, according to this Google Street View imagery.

Dozens of smart lampposts in Hong Kong were targeted during the 2019 protests, after fears emerged that they were operating as "facial recognition towers''. In response, the government said the lampposts do not have facial recognition functions, but some do contain cameras, as reported here by AFP in September 2019.