A Facebook post shared thousands of times claims seven children died in Senegal after being given a COVID-19 vaccine. This is false; scientists are still working to find a vaccine and Senegal's health ministry told AFP the incident never happened. The video in the post actually shows people gathering after they heard rumours that a door-to-door salesman was vaccinating locals.

"Scandal in Senegal," says a female voice commenting on the footage in French. "There's a guy who came to a house to vaccinate seven children against COVID-19. They dropped dead instantly".

In the video, a crowd of people is seen gathering outside a building where a police car is parked.

The footage has been shared thousands of times across more than a dozen Facebook accounts, with captions in English and French echoing the claim that seven children died after being vaccinated for the virus which has killed more than 94,000 people around the world as of April 10. 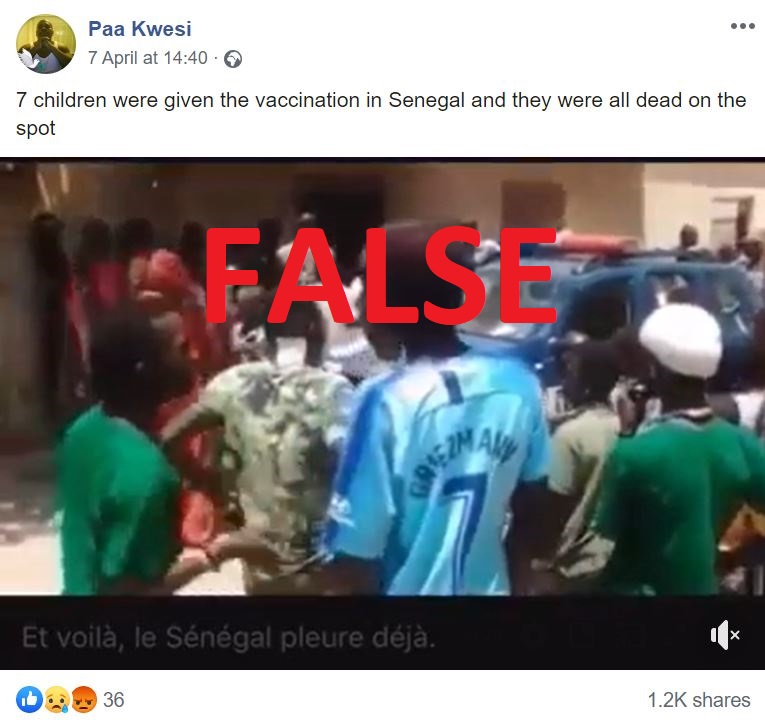 Contacted by AFP, a spokeswoman for Senegal's health ministry rejected the claims as "fake news".

"There is no vaccine," she said. "We have medical experts at the Institut Pasteur (a medical research institute, editor's note) in Dakar working to create and certify a vaccine according to procedure. They will be completely transparent about their findings."

According to the World Health Organization (WHO), clinical trials are underway to test possible vaccines and specific drug treatments for COVID-19. At the moment, patients receive care to relieve symptoms as there is no specific antiviral medicine for the disease.

Two leading French doctors sparked accusations of racism last week for discussing the idea of testing a vaccine for coronavirus in Africa on television. They later apologised and said they had been misunderstood.

Senegal's health ministry spokeswoman told AFP that "Senegal is a sovereign country and even if there was a vaccine, nobody could oblige us to vaccine our citizens".

AFP searched comments on the videos circulating on Facebook, with one suggesting the drama unfolded "when a Canadian and a Senegalese tried to vaccinate people".

A Google search for "Senegal vaccine Canadian" revealed news reports (in French) from March 26 on the arrest of two people, including a Canadian, in Senegal's capital Dakar for falsely claiming they were health ministry staff there to vaccinate children.

A report from Senegalese news site Senego, which also recounts this incident, features the same footage that has been circulating online alongside the false claims, but without the woman's voice-over.

The health ministry and police told AFP that a Senegalese man was briefly arrested following a misunderstanding on March 26 in Dalifort, an area of Dakar. However, they said that no Canadian was detained.

Police officers were called and found no medical equipment on the man, she said.

Contacted by AFP, a spokesman for the armed forces ministry confirmed that a Senegalese man was arrested and quickly released. He said that no Canadian was involved.

"There was just one man who was a Senegalese national selling cosmetics door to door," he said. "During the discussion, a member of the family asked him if he had any vaccines. He jokingly replied that he did. The aunt rounded up the whole neighbourhood. Officers attended and found only cosmetic products in the man's bag. The drama was caused by the fact he was wearing a health ministry t-shirt".

Claim :   Seven children died in Senegal after being given a vaccine for COVID-19, the novel Coronavirus disease.
Claimed By :  News reports from Press Afrik, Senego & Facebook users
Fact Check :  False
Senegal Coronavirus Coronavirus rumours Coronavirus fake news Coronavirus viral video FactCheck Video FactCheck Facebook Viral FAKE NEWS Coronavirus vaccine Senegal
If you value our work, we have an ask: Our journalists work with TruthSeekers like you to publish fact-checks, explainers, ground reports and media literacy content. Much of this work involves using investigative methods and forensic tools. Our work is resource-intensive, and we rely on our readers to fund our work. Support us so we can continue our work of decluttering the information landscape. BECOME A MEMBER
📧 Subscribe to our newsletter here. 📣You can also follow us on Twitter, Facebook, Instagram, Youtube, Linkedin and Google News