Multiple Facebook posts shared hundreds of times claim that a person named Richard A. Rothschild filed a patent for novel coronavirus tests in 2015. The claim is false; the image shows a supplemental application that was filed in 2020 following the submission of another patent application in 2015 that was not related to the coronavirus; a spokesperson for the financial services firm Rothschild & Co. said the patent's applicant had no link to the company.

The claim was published on Facebook here by an Australia-based user on October 7, 2020.

The post features a screenshot of a United States patent application for a "SYSTEM AND METHOD FOR TESTING COVID-19" filed by an applicant named as "Richard A. Rothschild."

The application is dated May 17, 2020. A subsection of the document states that a "provisional application" was filed on October 13, 2015.

The post's caption reads: "All the obedient sheeple should check the dates! Youve all been scammed!" 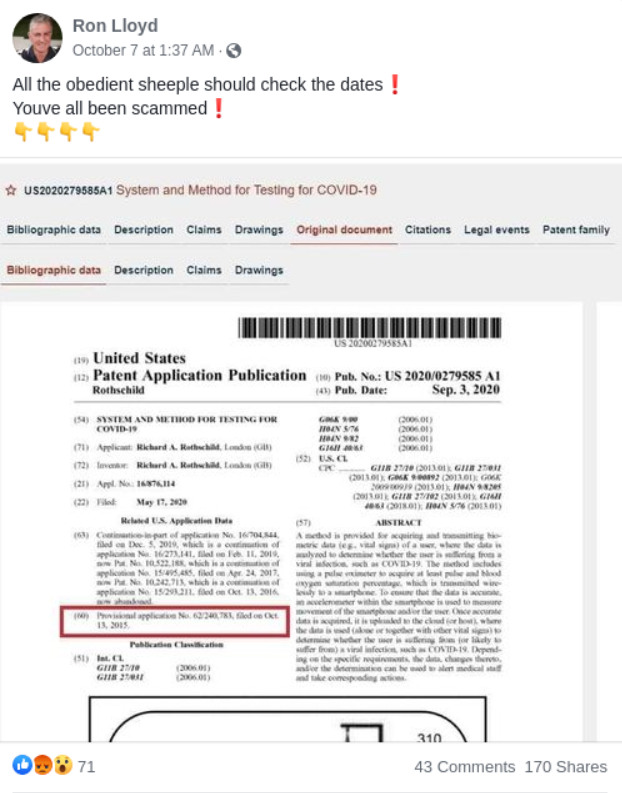 The claim was shared by US users on Facebook here and here. The claim has also appeared in German, Dutch, French, Spanish and Italian.

A search on Espacenet, a platform for searching patents and applications developed by the European Patent Office, shows the application for a "System and Method for Testing for COVID-19" was listed here.

The site shows that the filing is a "continuation in part" (CIP) application for a US patent, i.e. a partial continuation of an existing application. The CIP principle allows an inventor to link a new patent with an older license, as long as the old invention contributed to the development of the new one.

Rothschild's patent, which is for a method of "acquiring and transmitting biometric data," was first filed in 2013, as noted in the screenshot shared in the misleading Facebook posts.

The CIP application was later submitted in May 2020 because the method can be used to "determine whether the user is suffering from a viral infection, such as COVID-19," as noted in the patent's abstract.

Rainer Osterwalder, a European Patent Office spokesperson, also said the "the patent application had no reference to COVID-19 before 2020."

"In the first disclosed registration of 2016, this is about video data. In the subsequent applications of 2016/2017, the collection, processing and transmission of biometric data was specified. The first application from 2015 that you mentioned was never disclosed, but for patent law reasons it must also have referred to the mentioned inventions (otherwise a 'continuation in part' would not be possible)," Osterwalder told AFP.

The exact steps of Rothschild's patent application can be seen on Espacenet or via Google Patents. As of October 21, 2020, the application is in the process of being granted by the US Patent Office.

Regarding the Rothschild named in the patent, AFP contacted the Rothschild & Co. group, which is controlled by the Rothschild family. The family has often been the subject of anti-Semitic conspiracy theories, as detailed by US newspaper The Washington Post here.

A company spokesperson told AFP on October 8, 2020 that "there is no link between Rothschild & Co and the person named in the patent".

The patent attorney of Richard A. Rothschild did not respond to a request for comment by AFP.

Claim :   A patent claim for COVID-19 testing was filed in 2015.
Claimed By :  Facebook posts
Fact Check :  False
COVID-19 COVID-19 Outbreak COVID-19 Pandemic COVID-19 Test Patent Coronavirus Coronavirus Pandemic Coronavirus Outbreak COVID-19 Vaccine COVID-19 Cure Coronavirus Cure Coronavirus Vaccine
If you value our work, we have an ask: Our journalists work with TruthSeekers like you to publish fact-checks, explainers, ground reports and media literacy content. Much of this work involves using investigative methods and forensic tools. Our work is resource-intensive, and we rely on our readers to fund our work. Support us so we can continue our work of decluttering the information landscape. BECOME A MEMBER
📧 Subscribe to our newsletter here. 📣You can also follow us on Twitter, Facebook, Instagram, Youtube, Linkedin and Google News