A claim posted on Twitter says that most deaths in the 1918 influenza pandemic originated from bacterial pneumonia caused by face masks and that Dr Anthony Fauci, the US government's top expert in the fight against COVID-19, knew about it. This is false; the 2008 study referred to in the tweet, and which Fauci co-authored, aimed to help plan for future pandemics and made no link to mask-wearing.

"The unmasked buried the masked in the 'Spanish Flu.' What did people in #masks die from?

Bacterial pneumonia. Who knew this and wrote about it in 2008? Dr. Anthony Fauci," says the tweet from a woman who identifies herself as a "naturopathic medical doctor.

She quotes a previous tweet from herself citing as evidence the 2008 study co-authored by Fauci, who is director of the National Institute of Allergy and Infectious Diseases (NIAID) and a member of the White House coronavirus task force. 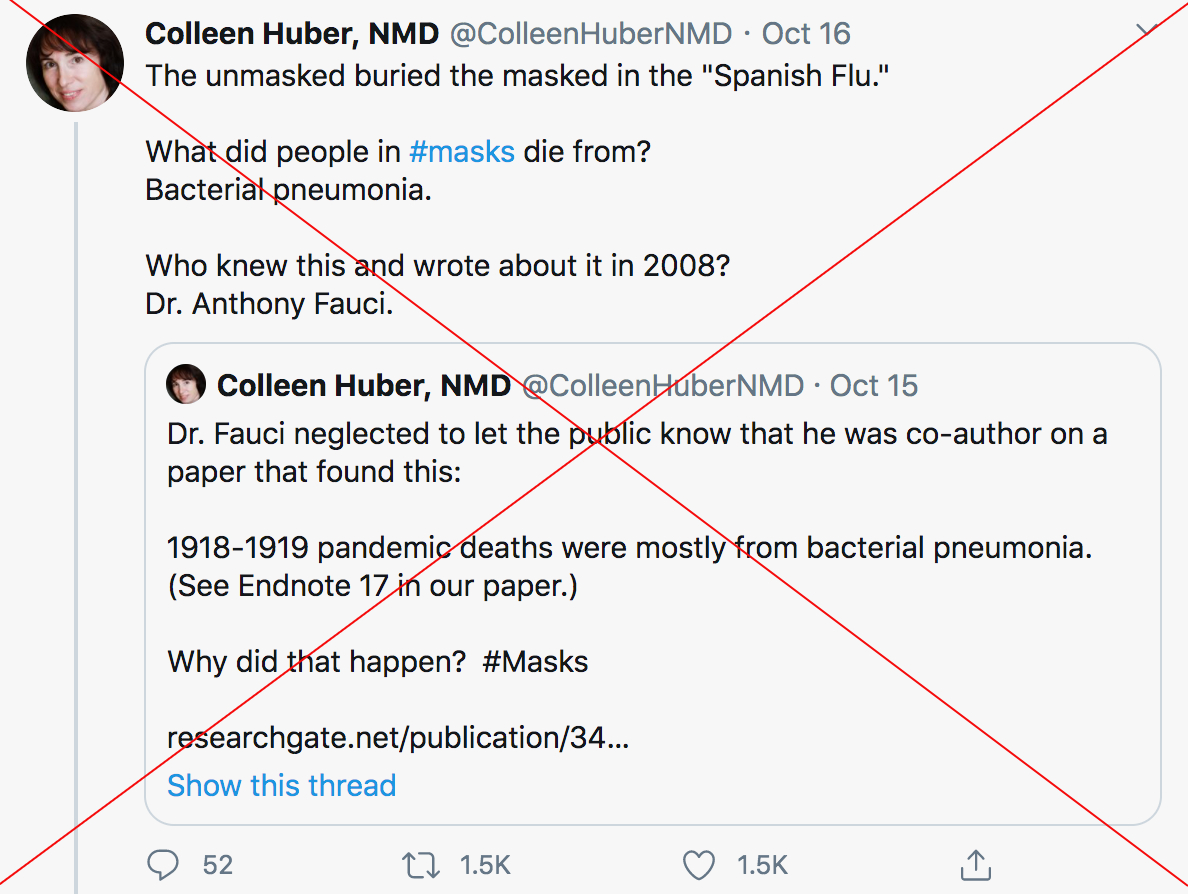 The initial claim, shared more than a thousand times on Twitter, also appeared as a screenshot on Facebook including here, here, here, and on Instagram here. Some posts called on people to stop wearing masks.

The author of the tweet, Colleen Huber, has published her false claims about masks in two non peer-reviewed blog posts -- here and here -- on primarydoctor.org, a website that also hosts other spurious claims about the novel coronavirus including "Is there a pandemic? -- later retracted by its author.

Huber cited here on page six the study from NIAID -that found severe changes indicative of bacterial pneumonia in postmortem samples from 1918 influenza patients. "It is also known that the 1918-1919 pandemic was the last time that human societies experimented with widespread long-term masking," she claims.

But NIAID told AFP in a statement: "The 2008 study does not mention masks and had nothing to do with masks" Instead, the study "analyzed data from fatal 1918 infections and showed that the majority of cases were associated with secondary bacterial pneumonias," NIAID added.

The 1918 influenza pandemic was the most severe global pandemic in recent history. Around one-third of the world's population became infected with the virus and at least 50 million people died, according to the Centers for Disease Control and Prevention (CDC).

In 1918, antibiotics were not available. The availability of antibiotics during later influenza pandemics of the 20th century was probably a key factor in the lower number of worldwide deaths during those outbreaks, noted Dr. David Morens, co-author of the study, in a National Institutes of Health (NIH) news release.

The study was conducted to better prepare for future pandemics, concluding that prevention and other measures against secondary bacterial pneumonia, along with antibiotic and bacterial vaccine stockpiling, should be high priorities.

"This association of secondary bacterial pneumonias has long been associated with severe influenza in human and animal studies. There are several published references to this," NIAID told AFP.

Scientific papers from other authors confirm this, here, here and here. None of these studies mentions the regular use of masks as an increasing factor or a direct cause of secondary bacterial pneumonia. They note that respiratory infections are a serious medical concern in viral outbreaks.

Dr Taison Bell, critical care and infectious disease physician at the University of Virginia, added that "there is no reputable study that has connected mask use with an increase in bacterial pneumonia."

Also Read: Did WHO Say Bill Gates Is Adding Sterilisation Formula In Vaccines?

He noted that good hygiene, hand washing and social distancing are all recommended by physicians to complement the use of face masks.

"In every single influenza season, we actually expect a certain proportion of our patients to develop bacterial pneumonia. It's a well-known established complication that you start learning about in medical school," he said in a phone interview.

AFP Fact Check has addressed other false and misleading claims about face masks including here, here and here.

The United States has seen around 300,000 more deaths than usual since late January, with two-thirds attributable to Covid-19, a government study issued in October found.

The US coronavirus death toll is currently around 220,000, according to the latest data from Johns Hopkins University.

AFP Fact Check has debunked more than 650 false and misleading claims about the novel coronavirus.

Claim :   The 1918 influenza pandemic originated from bacterial pneumonia caused by face masks and Dr Anthony Fauci knew about it.
Claimed By :  Social media posts
Fact Check :  False
Anthony Fauci Bacterial Pneumonia COVID-19 COVID-19 Outbreak COVID-19 Pandemic Coronavirus Coronavirus Pandemic Coronavirus Outbreak COVID-19 Vaccine COVID-19 Cure Coronavirus Cure Coronavirus Vaccine Face Masks Face Mask Mask Masks
If you value our work, we have an ask: Our journalists work with TruthSeekers like you to publish fact-checks, explainers, ground reports and media literacy content. Much of this work involves using investigative methods and forensic tools. Our work is resource-intensive, and we rely on our readers to fund our work. Support us so we can continue our work of decluttering the information landscape. BECOME A MEMBER
📧 Subscribe to our newsletter here. 📣You can also follow us on Twitter, Facebook, Instagram, Youtube, Linkedin and Google News