Three photos have been shared thousands of times in multiple posts on Facebook and on blogs alongside a claim that Myanmar State Counsellor Aung San Suu Kyi has been recognised by 43 countries as "mother of the world". The claim is false; the images show coins with Aung San Suu Kyi's image created by a Burmese artist; as of August 2020, there was no international award for "mother of the world". 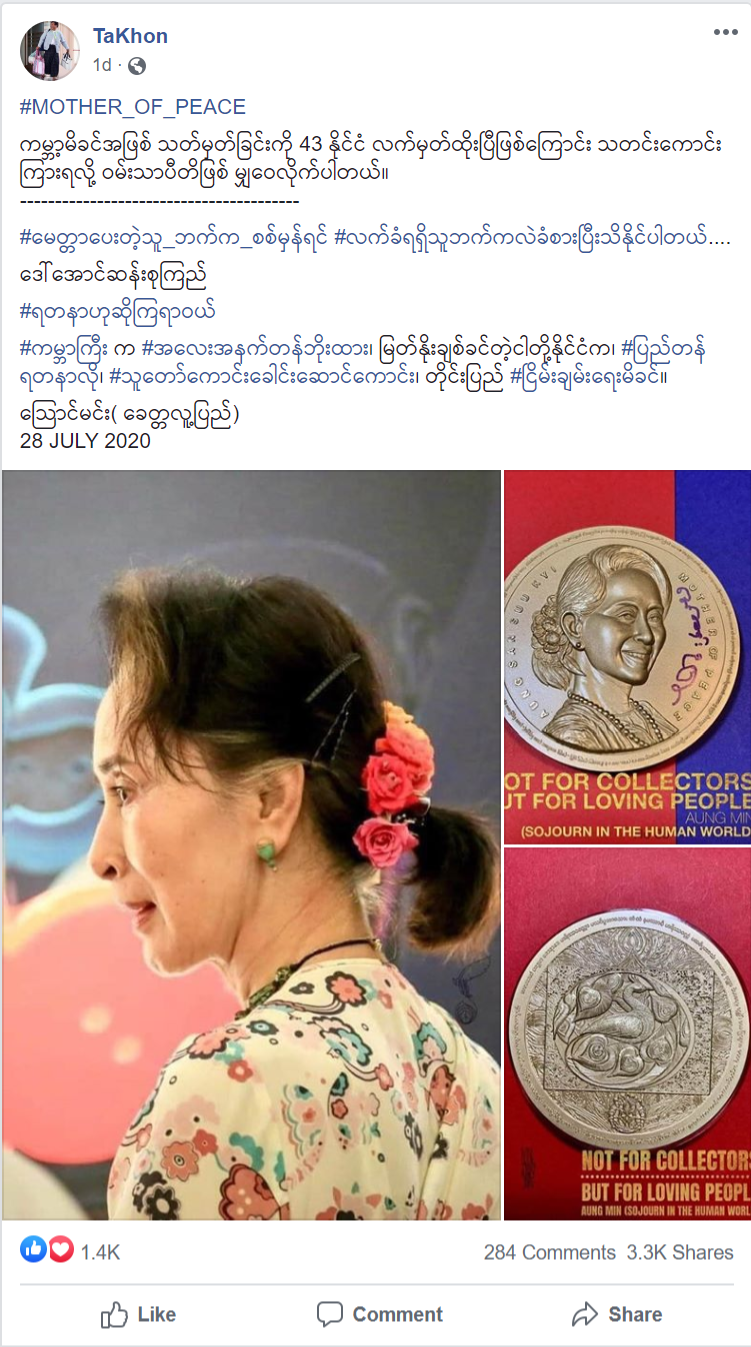 The post's Burmese-language caption translates to English as: "Good news: 43 countries signed the recognition of Mother Suu as the mother of the world".

"Delightfully sharing the good news that the title of 'Mother of the World' is signed by 43 countries. #When the love is true from the giver's side, the taker can feel it in their heart. Daw Aung Sann Suu Kyi."

The post includes a photo of Aung San Suu Kyi alongside two images of a coin. One coin contains an image of her alongside an engraving in English that reads: "Mother of peace. Aung San Suu Kyi". Suu Kyi's name can also be seen written in Burmese in purple ink.

A reverse image search on Google found the photos show a coin created by a Burmese artist. They were previously posted on this Facebook page for artist Aung Min on June 22, 2020.

The post's caption states in part: "When the love is true from the giver's side, the taker can feel it in their heart. - Daw Aung San Suu Kyi".

Suu Kyi celebrated her 75th birthday on June 19, 2020, according to reports published by Burmese media outlets The Myanmar Times here and The Irrawaddy here.

Also Read: This Video Of Muslims Praying In Front Of Hagia Sophia Was Shot In 2014

Peacock, a popular iconography in Myanmar, is also used as a symbol of Suu Kyi's party, the National League for Democracy.

Below are two sets of screenshot comparison of the images in the misleading post (L) and the pictures in Aung Min's post (R):

As of August 2020, there was no international award for "mother of the world". A keyword search in both Burmese and English found no credible sources for the purported award.

Claim :   Myanmar State Counsellor Aung San Suu Kyi has been recognised by 43 countries as mother of the world.
Claimed By :  Myanmarese blogs, posts on Facebook
Fact Check :  False
Aung San Suu Kyi Myanmar Burma Nobel Peace Prize Mother Of The World Mother Of The World Award Fake News Fact Check
If you value our work, we have an ask: Our journalists work with TruthSeekers like you to publish fact-checks, explainers, ground reports and media literacy content. Much of this work involves using investigative methods and forensic tools. Our work is resource-intensive, and we rely on our readers to fund our work. Support us so we can continue our work of decluttering the information landscape. BECOME A MEMBER
📧 Subscribe to our newsletter here. 📣You can also follow us on Twitter, Facebook, Instagram, Youtube, Linkedin and Google News