The post's Urdu-language caption translates to English as: "These are few recent photos of the Peshawar BRT. Neither media, nor any anchor is talking about it on social media. Only there is Saleem Safi who has been tweeting on this serious issue for the past two days. Saleem Safi please raise voice over these latest photos. Thanks."

Saleem Safi is a prominent journalist who has tweeted about the state of the Peshawar Bus Rapid Transit (BRT) system; for example here and here.

The post circulated four days after the new BRT system was inaugurated by Pakistani Prime Minister Imran Khan on August 13, 2020, as reported in this article by the state-run Radio Pakistan. 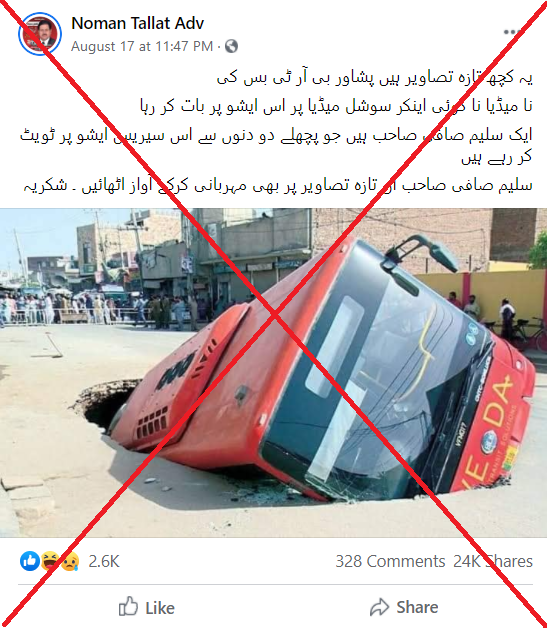 The same photo was also shared alongside a similar claim here on Facebook and here, here, here and here on Twitter.

The photo was published here by Dawn, a major Pakistani English-language newspaper, on May 13, 2018. The article is headlined "Bus trapped in sinkhole". It reports the accident occurred in Multan, a city about 550 kilometers (342 miles) south of Peshawar.

The 2018 accident in Multan happened after a new Metro Bus System was launched in January 2017, as noted here by the provincial Punjab Transit Authority.

Punjab Metro Buses are red, as seen in the photo in the misleading posts, while Peshawar BRT buses are green.

Below is a screenshot comparison of photos from the official transit authorities: