An image of a truck dumping fresh tomatoes onto an empty field has been shared thousands of times in multiple Sinhala-language Facebook posts which suggest it shows a scene in Sri Lanka. The posts claim it illustrates the government's failure to help farmers to sell their produce during a coronavirus lockdown. The claim is misleading; the photo has circulated in 2017 news reports about food waste in Australia. 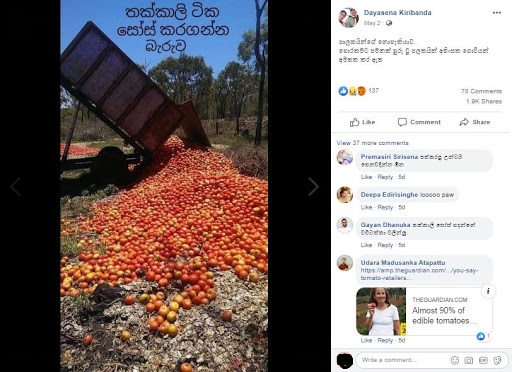 A screenshot taken on May 11, 2020, of the misleading post by Dayasena Kiribanda

The post's Sinhala-language caption translates to English as: "Incompetence of rulers. Rulers familiar only with thieving, have forgotten our innocent farmers".

The text overlay in the image reads: "Unable to make the tomatoes into sauce".

The claim circulated online following reports that Sri Lanka farmers were facing difficult circumstances during the nationwide COVID-19 lockdown. Here is a report about the issue published by Sri Lankan news organisation News First on April 11, 2020.

The claim is misleading; the image was published in 2017 news reports about Australia's food wastage.

A reverse image search of the photo in the misleading posts on Google found this report published by UK newspaper The Guardian on October 13, 2017, alongside the title "Almost 90% of edible tomatoes thrown away based on appearance - research".

The university is located on the Sunshine Coast in the Australian state of Queensland.

Below is a screenshot comparison of the image in the misleading posts (L) and the photo published in The Guardian article (R): 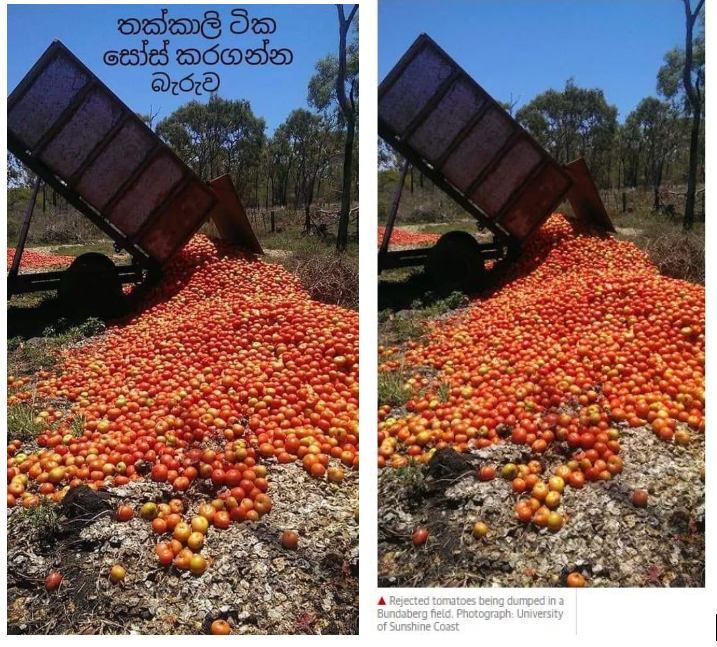 The photo can also be seen in this corresponding study published by the University of the Sunshine Coast on its website on October 11, 2017.