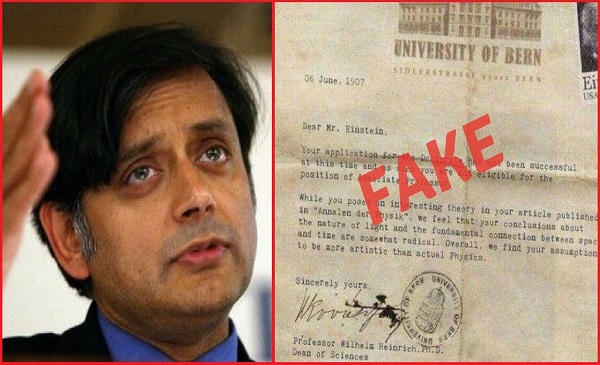 Congress MP Shashi Tharoor had his own 'webaqoof' moment on Monday when he posted an image of a fictitious letter purporting to be a rejection letter from the University of Bern in Switzerland to noted physicist Albert Einstein.

The MP from Thiruvananthapuram tweeted the fabricated letter that has existed online for since 2016 with a message that read, "For all those smarting from rejection: those in power today (& in a position to judge you) will not necessarily be proven right tomorrow. And their judgement of you might look downright silly."

For all those smarting from rejection: those in power today (∈ a position to judge you) will not necessarily be proven right tomorrow. And their judgement of you might look downright silly.... pic.twitter.com/jiDzjbaRyt

The image purports to show a letter written by one Professor Wilhelm Heinrich to Albert Einstein and calling Einstein's ideas on space, time and light that came to be known as the Theory of Relativity, as "somewhat radical." "Overall we find your assumptions to be more artistic than actual Physics," the fake letter goes on to state.

The forged letter also claims that Einstein's application for a doctorate was unsuccessful and that he was not eligible for the position of an associate professor. It bears the date June 6, 1907, is drafted using a typewriter font and appears to be on the letterhead of the University of Bern. It also appears to be folded and yellowish in colour to give the impression of being genuine.

However, the letter was debunked by U.S. based fact-checking website Snopes in May 2016. (Read Snopes' Fact-Check here) 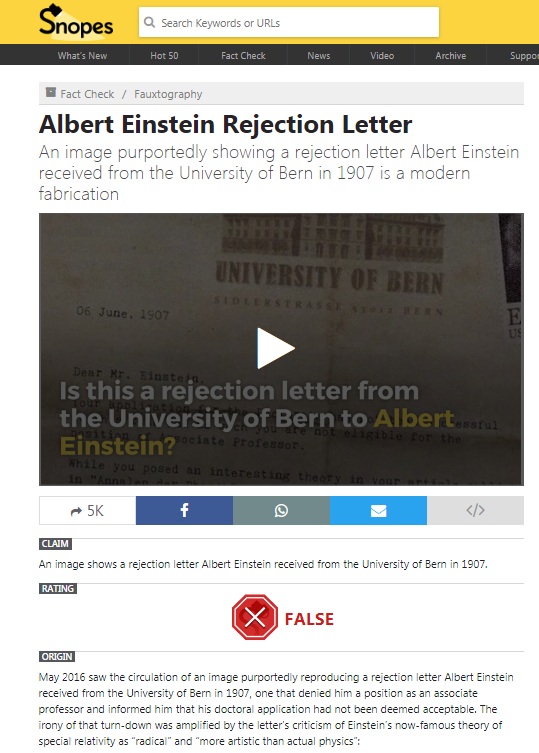 Not just Snopes, but "Uniaktuell" the online magazine of the University of Bern had also debunked the fabrication detailing historical inconsistencies pointed out by the university's archivist Niklaus Bütikofer. Among the arguments it made to debunk the letter it listed the following in the article 'The Einstein forgery'.

The article also states that on June 17, 1907 Albert Einstein submitted his application for a habilitation in theoretical physics.(Habilitation loosely refers to a qualification process leading to teaching as a professor at a university.)

The application was forwarded to the Faculty of Philosophy of the University of Bern. Faculty members discussed and rejected Einstein's application on October 28, 1907 because he failed to submit a habilitation thesis and not because his theories had been rejected. Einstein was informed by the dean that the faculty could only habilitate him once his habilitation thesis was submitted at a later date.

"Einstein must have done this in the following months, because on 27 February 1908, he was invited for a trial lecture at the University of Bern. Subsequently, the faculty, and a short time later the Directorate of the Bernese Education granted him the teaching qualification (Venia docendi). The true story is thus far less spectacular than the one told in the forged letter."

At the time of writing this story, Tharoor's tweet had over one thousand likes and over 500 retweets. Many of the 100 replies to his tweet were from Twitter users who responded with Snopes' story yet the politician failed to delete his post almost 24 hours later.

In July 2017, the politician known for his extensive English vocabulary popularized the word 'webaqoof' - one who believes every claim or allegation on the internet and social media.

*Webaqoof*: "one who believes every claim or allegation on the internet & social media must be true"