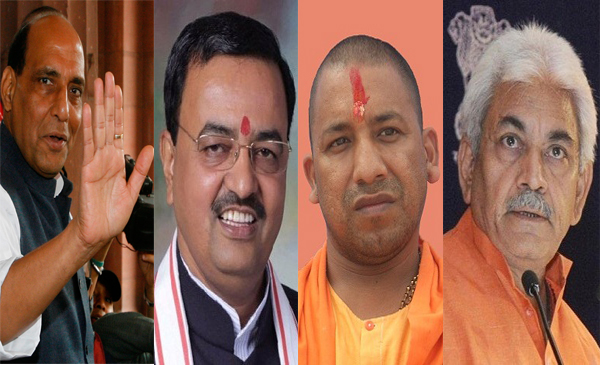 The Bharatiya Janata Party has more than one reason to celebrate. The party not just decimated the ruling SP and its alliance partner Congress by cornering a massive 324 seats, but has also registered its biggest electoral victory in the state in the last 30 years. Kalyan Singh won the party 221 seats in 1991 and ever since then, they been in a steady state of decline, last winning 47 seats in the 2012 assembly elections.

The BJP campaign has also demolished one more myth that prevailed during the Bihar elections in 2016. The party once again fought this election without naming any of their senior leaders as presumptive chief minister, banking all their hopes on Prime Minister Narendra Modi’s mass connect with the voters. The party is expected to name its chief minister on Sunday.

So who are the top Chief Ministerial candidates in Uttar Pradesh?

The Union Home Minister and one time Chief Minister of Uttar Pradesh between 2000 – 2002, Rajnath Singh is a clear favourite and will top the list of possible CM candidates. He was a star campaigner in UP Election 2017 and addressed more than 120 rallies in the state. Having been associated with the RSS for more than 50 years and his rise as one of the topmost leader in BJP, he will also have a strong backing from the Hindutva front. But this may not be enough to take it for granted that Singh will return as the chief minister of the state. It is not yet known if Singh would like to step down as Union Home Minister to take up this responsibility.

Keshav Prasad Maurya, a leader from the OBC category is also the party’s state president and represents the Phulpur constituency in the Lok Sabha. He belongs to the Maurya caste and is the youngest in the list of possible candidates. He has attended around 100 rallies and was key in consolidating the non-Yadav votes for BJP and is close to the RSS. However, he has 11 criminal cases against him which could go against his prospects as CM.

Union telecom minister Manoj Sinha is a three time MP from Ghazipur. He is a graduate from Banaras Hindu University and enjoys the support of the upper castes in UP. He has been applauded by Prime Minister Modi for his role in the railway ministry. Sinha is also the key man overseeing the developmental projects in Modi’s Lok Sabha constituency of Varanasi. What may go in the favour of Sinha is his clean non-controversial image and proximity to the RSS.

A leading Hindutva face and a firebrand leader in BJP, Yogi is a five time MP from Gorakhpur, Uttar Pradesh. He is a prominent face from Purvanchal region of Uttar Pradesh. He also holds the reputation of being the youngest member to be elected to Lok Sabha at the age of 26. There were several reports that Yogi had battled the top leadership of the party for not naming him as the chief ministerial candidate and had sought to put pressure through his workers. But he denied those accusations and has said that he is not in the race for chief ministership. Either ways, for the BJP, Yogi will be a difficult choice as his controversial statements in the past and hindutva hardliner image may not go down well with the development agenda Modi wants to project in the state of UP.

Dinesh Sharma has served two terms as the mayor of Lucknow and is BJP’s national vice president and also holds the charge of Gujarat. Though he has not addressed rallies, he has played an important role in organizing campaigns. Sharma comes from a Brahmin family and also enjoys the confidence of Narendra Modi and RSS. According to a report in The Scroll, the Intelligence Bureau has sent a detailed report on Sharma to the PMO, following exit polls that projected a win for the BJP in UP.