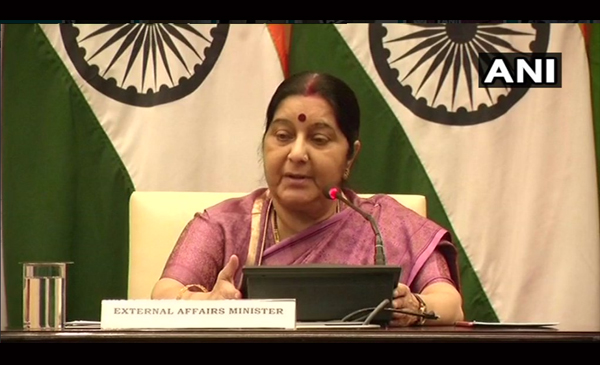 Sushma Swaraj, Union Minister for External Affairs[/caption] After years of mystery if the 39 Indians abducted by the ISIS in Mosul, Iraq were safe or not, External Affairs Minister Sushma Swaraj has finally set the matter to rest. Speaking in Parliament Swaraj said that the government can finally confirm that all the 39 Indians were killed and their bodies had been recovered. The minister informed Parliament that Minister of State for External Affairs VK Singh will be flying to Iraq to bring back their mortal remains to India on a special flight. But this admission by the External Affairs Minister has sparked a fresh controversy on whether the government intentionally hid the facts despite several reports by the media based on statements by the lone survivor�Harjit Masih.�Punjab Chief Minister Amarinder Singh and senior Congress leader Shashi Tharoor criticised the government for failing to inform the relatives of the 39 workers earlier despite the government knowing about ISIS killing them, they alleged.

We had expected this, it should have been announced earlier, it was known since much earlier: Punjab CM Capt Amarinder Singh on death of 39 Indians in Iraq's Mosul pic.twitter.com/Ov4O0GwNBc

This is saddening for every Indian, rest I would ask why was this information delayed by the govt, they should tell how it happened, when they died. Also, the way govt gave high hopes to the families was not right: Shashi Tharoor, Congress on death of 39 Indians in Iraq's Mosul. pic.twitter.com/dZ3EGVtwYh

BOOM looked at the statements given by Swaraj and the external affairs ministry in the Parliament and found that she had insisted on several ocassions that they had information from multiple sources of the captive Indians being alive. (Check the video from 10:30 onwards)

Similarly, in a reply in the Rajya Sabha on July 22, 2015, the external affairs ministry said "as per latest information from multiple third party sources, they are all safe. The Government is making all efforts and taking all steps to secure their release." 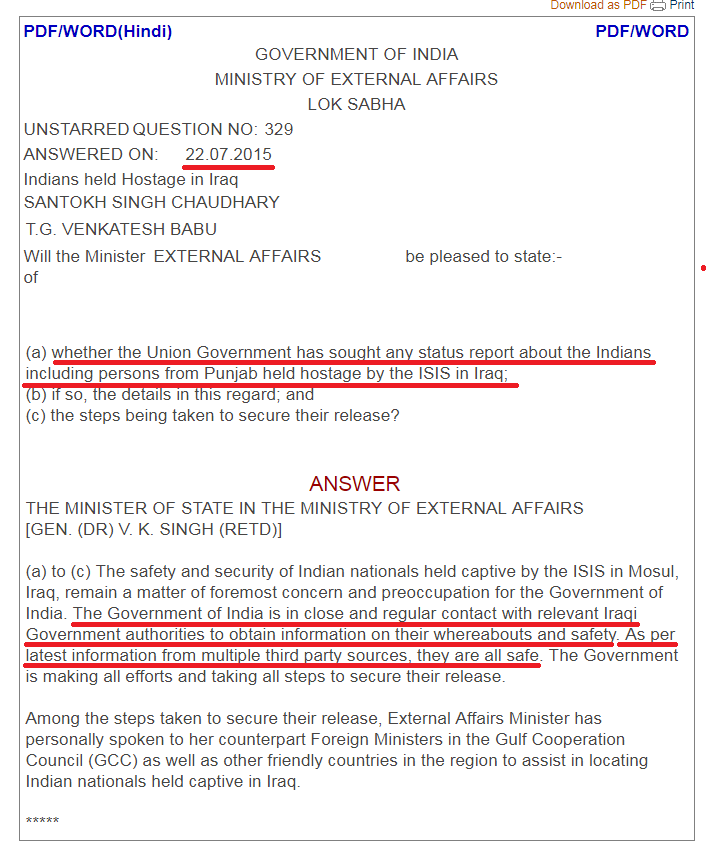 Ministry of External Affairs reply in Rajya Sabha on 22.07.2015 On July 26, 2017, Swaraj had once again updated the Parliament about her efforts to trace the missing workers and said that all her past statements were based on multiple government sources in the Middle East who had insisted they were alive. She read out her statement from 2014 in which she had declared that she neither had the proof that they were alive or that they were killed by ISIS. But her efforts to search for them would continue, Swaraj said.

Masih who had managed to flee from ISIS captivity in Iraq in June 2014 said he had been maintaining for the last three years that all others had been killed, according to a report filed by The Quint. In an interview to The Quint published on March 30, 2016, Masih had given his version of the events that took place after Mosul town was overrun by the ISIS in June 2014. Masih said that he was part of a group of 40 Indian construction workers who were working at University Lake Towers in Mosul when they sought their wages to come back to the country. On the pretext of getting them visas, ISIS fighters took them to the Al-Qudus building in Mosul but the plan to hold them there was foiled due to a rocket attack. ISIS later took them to a warehouse in the Al-Mansoor industrial area. Here, the 40 Indians were separated from the Bangladeshis and taken in a cramped van to the sand dunes and made to line up next to each other. Here is where Masih's account takes an interesting turn. Masih claims he was in the centre of the group and feigned death when their captors shot them one by one. Lying under one of his companions, he waited till their captors moved away from the execution site in the Badosh desert and then walked to the highway and hitched a hike in several vehicles that deposited him back with a different set of ISIS fighters. He lied to them that he was a Bangladeshi and changed his name to Ali. They then took him to the construction site where the other Bangladeshi workers were located. He moved with them to Erbil city and came back to India. But Swaraj in her speech in the Rajya Sabha had a different version of the events. She called Masih's account a 'cock-and-bull' story. Disputing his account of his dramatic escape from the sand dunes at Badosh, Swaraj said that the owner of the company who had hired these labourers and the caterer responsible for taking the Bangladeshi survivors to Erbil had helped Masih to travel with them using the alias 'Ali'. This she said happened before the 39 Indians were taken to the desert. The ISIS fighters took a count of the Indians and on finding only 39 of them instead of 40 moved all of them to Badosh. No one heard about what happened to the 39 Indians until recently when their bodies were recovered due to the efforts of the Indian government, said Swaraj. The minister said that it is only after Mosul was free of ISIS, that the Indian authorities could travel to Badosh to rescue any survivors. On being informed about a location where a mass grave was suspected, deep penetration radars were used to establish that the mound contained bodies. With the help of their Iraqi officials, the bodies were exhumed and after DNA testing, it was established that the bodies were of the 39 Indians who had gone missing in 2014. However it is not clear whether the government has sought any forensic help to find out when the 39 Indians were killed. General VK Singh also took to Twitter to attack the opposition for politicising the issue without taking note of the efforts the government and his ministry took to bring back the missing Indians.

But are the relatives of the victims convinced? Gurpinder Kaur, sister of Manjinder Singh, one of the 39 Indians killed has questioned Swaraj's assurances to the relatives that the captives were alive and will be brought back to India safely.

Yes, she was supposed to announce this in Parliament first but he was part of our family. All she cared about was her reputation. She used to say they're like her children, if that's the case where's her sorrow?: Gurpinder,sister of Manjinder Singh who was among 39 Indians killed pic.twitter.com/VGZyj9HvGY