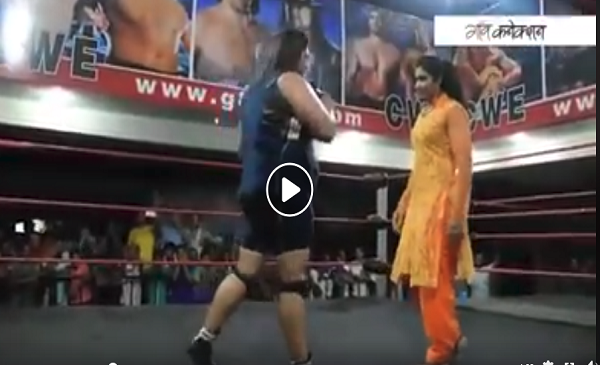 A wrestling video of a free style wrestler and a woman wearing a saffron color salwar kameez, is being shared on social media as that of a Pakistani wrestler against Sandhya Phadke of Durga Vahini, RSS.

However, neither is any of the wrestlers from Pakistan nor is the lady in saffron Sandhya Phadke of RSS. Both are Indians - B B Bull Bull, India's first professional wrestler and the lady in salwar kameez is Kavita Devi, a former police officer from Haryana, power lifter and a mixed martial arts (MMA) fighter. 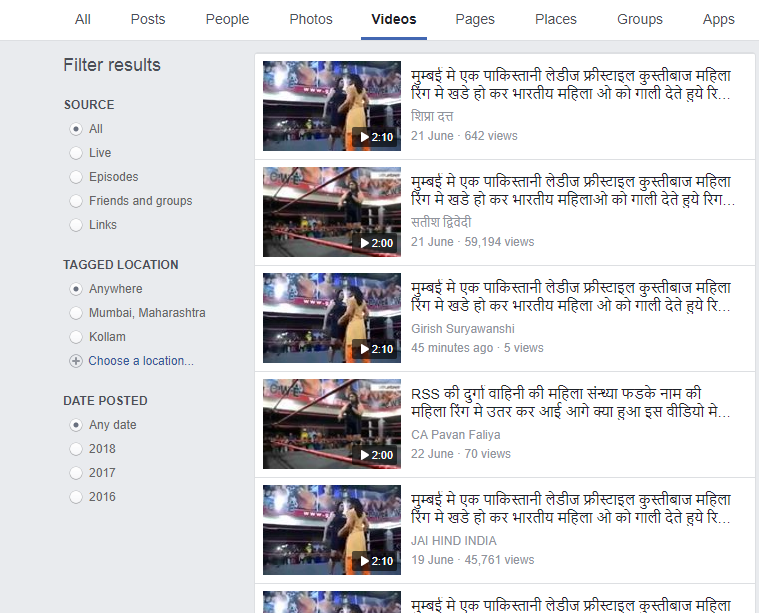 Twitter user Rishi Bagree with a large following of right-wing sympathisers had also shared the video with the same narrative back in 2016. BOOM has exposed Rishi Bagree for sharing videos/images with fake narratives in the past. Click here and here.

Her Challenge was accepted by a spectator by name Sandhya Phadke pic.twitter.com/rdU8J4ywvm

The video is from 2016 of Continental Wrestling Entertainment in Jalandhar according to a DNA report. It says that Bull Bull challenged the crowd, following which Kavita Devi accepted the challenge and stepped into the ring. CWE is a professional wrestling school started by The Great Khali and these videos are meant for entertainment purpose.

BOOM spoke to Anil Rana, Continental Wrestling Entertainment Office In-charge who said, 'They are professional wrestlers and have no connection to Pakistan. The name of the lady is not Sandhya Phadke but Kavita Devi and she has also gone to WWE from our organisation. As far as I know, she doesn't have any connection with RSS. The other lady in the video challenging the crowd is BB Bull Bull who is going to have a fight soon in Himachal.'

We also found the same video on the YouTube channel of Continental Wrestling Entertainment.

In a different video Bull Bull is seen taking revenge on Kavita Devi.

Claim :   RSS Member Sandhya Phadke Defeated Pakistani Free Style Wrestler
Claimed By :  Facebook Posts
Fact Check :  FALSE
Bull Bull CWE Durga Vahini featured Great Indian Khali Haryana India Kavita Devi Mumbai Pakistan RSS Wrestling
If you value our work, we have an ask: Our journalists work with TruthSeekers like you to publish fact-checks, explainers, ground reports and media literacy content. Much of this work involves using investigative methods and forensic tools. Our work is resource-intensive, and we rely on our readers to fund our work. Support us so we can continue our work of decluttering the information landscape. BECOME A MEMBER
📧 Subscribe to our newsletter here. 📣You can also follow us on Twitter, Facebook, Instagram, Youtube, Linkedin and Google News 📝Stay updated with all our latest fact check stories.